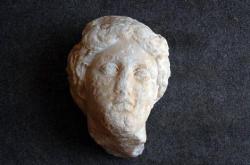 Antiochia ad Cragum - A group of archaeologists has discovered a life-sized marble head of Aphrodite while uncovering an ancient pool-side mosaic in southern Turkey. Buried under soil for hundreds of years, the goddess of love and beauty has some chipping on her nose and face. Researchers think her presence could shed light on the extent of the Roman Empire's wide cultural influence at the time of its peak. Archaeologists found the sculpture while working at a site called Antiochia ad Cragum (Antioch on the cliffs), on the Turkey's Mediterranean coast. The researchers believe the region, which is dotted with hidden inlets and coves, would have been a haven for Cilician pirates - the same group who kidnapped Julius Caesar and held him for ransom in 74 B.C. But the pirates' reign ended when the Roman occupation of the area expanded. The city was officially established around the time of Emperor Nero and flourished during the height of the Roman Empire, researchers say. The presence of an Aphrodite sculpture suggests Greek and Roman influence had become mainstream in far-flung cities like Antiochia ad Cragum in the first and second centuries A.D., the excavation's director Michael Hoff, an art historian at the University of Nebraska-Lincoln, said. Hoff said Aphrodite's head is the first fragment of a monumental statue they have found at Antiochia ad Cragum over eight years of digging. 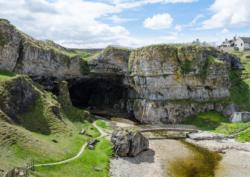 Smoo Cave - The largest coastline cave in the UK – and a popular tourist attraction – is to be closed for safety work to be carried out.  Smoo Cave is located at the eastern edge of the village of Durness, on Scotland’s most northerly coastline. Set into limestone cliffs, the cave is over 200ft long, has an unusual geological formation and rich archaeological history which attracts over 43,000 visitors a year. Highland Council has appointed Rope Access Scotland to undertake rock stability works in the area, beginning next Monday. It is expected to take two weeks to complete, and includes light rock scaling, netting and bolting and will be overseen by geotechnical experts from consultants URS Infrastructure & Environment UK Limited. “Smoo Cave is a key site in terms of both archaeology and geology and has a unique contribution to make within the North West Sutherland Geopark. The first chamber of the unique cave, named from the Norse ‘smjugg’ or ‘smuga’ – meaning hiding-place or hole – was formed by the action of the sea, while the inner chambers are freshwater passages which were formed from rainwater dissolving the limestone. There have also been digs which have found artefacts from the Neolithic, Norse and Iron Ages.

USA – Jacksonville - Southern Oregon University archaeologists will return to Jacksonville next month to conduct more excavations at the old Chinese Quarter. The Chinese Quarter was established in the mid-1850s and is thought to have been the earliest such quarter in Oregon, making it significant on both a regional and national level. The site served as a vital resource for the thousands of Chinese miners working in Southern Oregon in the 19th century. SOU's archaeological work this year will expand on previous excavations in an attempt to uncover buildings associated with the neighborhood when it burned in the late 1880s. 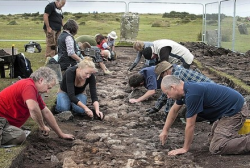 Bodmin Moor - A team from Cornwall's Historic Environment department has spent the past week at the Hurlers stone circles near Minions carefully uncovering a monument believed to be the only one of its kind in the British Isles. Known variously as a "stone pavement" or "crystal causeway", experts are now certain the 4ft wide pathway linking two circles is an integral part of the site's ceremonial architecture.  First excavated in 1938 by the Ministry of Works, under the direction of the grandly titled Charles Kenneth Croft Andrew and C A Ralegh Radford, it was at that time described as a "processional pathway". Dig director James Gossip said several tangible clues to the Bronze Age people who built it have turned up during the excavation, including two flint tools. He said the wider significance and exact date of the enigmatic structure will only be known after tests are carried out on material taken from beneath it. Geomorphologists and archaeological scientists from Bristol University have taken samples for analysis. "What they will be looking for is evidence of burnt material, such as seeds, sealed beneath the pavement," said James. "This will be radio carbon dated to give a pretty accurate time of its construction and help to verify our assumption that this is a 4,000-year-old structure contemporary with the circles." Lead archaeologist Jacky Nowakowski said she had been delighted by the level of community support. She said: "We have already found two prehistoric flint tools in amongst the stones and this has given us a great deal of confidence about how well preserved it is and also the fact that it is related to the two circles on either side. "We still don't know exactly what it is, but by carrying out this work we may discover more about this extremely enigmatic site." The project's findings are due to be published in a report by the end of the year.

Chersonesos - After two decades of research led by a classical archaeology professor at The University of Texas at Austin, an ancient Greek settlement in southern Ukraine was granted World Heritage status by the United Nations Educational, Scientific and Cultural Organization (UNESCO). A port city founded by Greeks in the fifth century B.C., Chersonesos is the site of an excavation led since 1994 by Joseph Carter, professor of classical archaeology and the director of the Institute of Classical Archaeology (ICA) at UT Austin. “Chersonesos commands our respect because of its very important place in world history, as the birthplace of democracy in this part of the world, and of Christianity in the Slavic world,” said Carter. “Few places on Earth have such a long and vital history.” Carter said the excavation was considered significant by UNESCO because it linked the chora, or agricultural areas, to the urban area of Chersonesos, and it provided a rare glimpse of the lives of ordinary people and the exchanges of Greek, Roman and Byzantine empires in the Black Sea region.

Molt - An archaeological dig on the site where a priceless Bronze Age gold cape was found has unearthed new finds.  It had been thought nothing was left at the site at Mold, Flintshire after it was last excavated in 1953. But a community dig led by archaeologists has now turned up tiny burned fragments of bone and small pieces of pottery. They could turn out to be older than the Mold Gold Cape which was made 3,700 years ago from a single sheet of gold. The cape, which was discovered in 1833, is one of the British Museum's most prized artefacts and it has been on show at Cardiff and Wrexham this summer. It was found with a skeleton in a burial site. "The cape is one of Britain's, one of Europe's best artefacts in fact, it's a fantastic object," said Mr Lodwick. "But the site where it was found has been neglected somewhat and it has been great to work with the community to fill in some of the gaps". Mr Lodwick, who is normally based at the National Museum of Wales in Cardiff, has been working with colleague Alice Forward, a community archaeologist and they believe the community dig may have unearthed fragments which pre-date the cape. "We might have small remnant pieces of the early Bronze Age monument," he said. A suspected burial site belonging to the early medieval period, is also thought to have been discovered nearby. But it will not be excavated during this dig as the whole excavation site is to be closed on Saturday.