La Salada - Archaeologists have discovered a Clovis point, the characteristically fluted projectile point associated with the Clovis culture in the Mexican state of Zacatecas. The Clovis point was discovered by specialists from the National Institute of Anthropology and History (INAH) near the La Salada paleo-lagoon, where previously mammoth remains were discovered and studied during the 1980’s. During the Pleistocene, the Zacatecas region had large wetlands that supported groups of mammoths, mastodons, gomphotheres, camelids, equines, bison and large birds, among other animal species. The point, described as “finding a needle in a haystack” measures only 4.8 cm by 2.6 cm, and is the first example of human presence in the region, suggesting that ancient hunters took advantage of the arrival of megafauna around the lagoon when the area was part of the continental route followed by the early settlers between 12,000 and 11,000 years go.

Bizmoune Cave - Archaeologists discovered the oldest jewelry ever found in Bizmoune Cave in Morocco and published their findings on Wednesday in Science Advances. The jewelry, shell beads determined to be between 142,000 and 150,000 years old, was discovered by a team including professor of anthropology Steven L. Kuhn. "Humans have been expressing themselves through the symbolic use of seashells for thousands of years. This discovery is the oldest example of this type of human expression. It has broad implications for anthropologists' understanding of human evolution and development," a statement from UA cited Kuhn as saying. Kuhn discussed some of these implications, saying, "[The shells] were probably part of the way people expressed their identity with their clothing. They're the tip of the iceberg for that kind of human trait. They show that it was present even hundreds of thousands of years ago and that humans were interested in communicating to bigger groups of people than their immediate friends and family," according to the statement. Because written languages are only several thousand years old, the beads are invaluable to archaeologists researching evolution and cognitive development, with Kuhn describing them as "essentially a fossilized form of basic communication," according to UA. Kuhn added that the durability of the beads may suggest those who made them were trying to convey a "more permanent" message than one that could be expressed by other means available at the time, such as body paint.

Aoya Kamijichi - The face that gazes out at the world is of a middle-aged man who lived in Japan around 1,800 years ago. Researchers reproduced the facial features from a skull dating from the Yayoi Pottery Culture Period (1000 B.C.-A.D. 250) unearthed at the Aoya Kamijichi archaeological site here. The No. 8 skull is one of a number of human remains from the latter half of the Yayoi Period at the government-designated historic site. The skull contained the largest amount of brain matter, and its DNA was well-preserved. Researchers started out by making a replica of the skull with a 3-D printer so clay could be applied to recreate skin. A mold was then developed based on the replica, which was filled with a plastic material to create the face. Finally, strands of thick hair were transplanted onto the head as the DNA analysis suggested that was the way the man had looked.

Accana Hoyuk  - The excavations in Accana Hoyuk of the Reyhanli district in Hatay have been underway for six months. A 3,250-year-old seal belonging to a Hittite prince and an ancient cuneiform tablet dating back 3,400 years were discovered. An ancient tablet they have unearthed has Akkadian cuneiform texts, Akar noted, saying: "The tablet, around 3,400 years old, and the accompanying cylinder seals give us information about the administration and administrative practices of the region, especially during a period when the region was under the rule of the Mitanni Empire." He said they had found a 3,250-year-old seal during the latest excavation, adding that the item is one of the most important discoveries of this year, helping us understand "what happened during the period after the region came under the Hittite control" as well as "define its administrative and political dynamics." Akar further noted that the findings provide information about the administrative and archival practices in the Alalakh ancient city, the capital of the Mukish Kingdom in the Middle and Late Bronze Age. The impressions on the cylinder seals show the existence of a ruling class in the region, Akar said, adding: "This last one, with Luwian hieroglyphic inscription on it, gives us the name of a Hittite prince whose name is not included in other written documents in Alalakh and appears for the first time." He did not reveal the name of the Hittite prince, but said a Hittitology academic at Istanbul University Faculty of Letters, Hasan Peker, will share the name of the prince with the scientific community once the research is completed. Kovardo - "In addition to the cross found in the village of Kovardo, in the mountains of Skardu-Baltistan, in northern Pakistan, many other inscriptions, objects and archaeological sites have been found or potentially located, indicating the cultural richness and religious of the peoples of Pakistan. During our visit to the cross of Kovardo we were surprised to see other symbols of Christian faith in the mountains, especially the symbols of a cross and a lamb. Many other symbols engraved on the mountains and hills. With the help of some friends we were able to discover the place of the tombs of the two missionaries who lived in that area, unfortunately transformed into a connecting walkway between various private homes; the tombstones are missing": "The cross of Kovardo discovered in June 2020 (see Fides 22/6/2020) proves the presence of many layers of culture, history, movements and religious traditions in Skardu. It is also the proof of the developed civilization Skardu which is not only a geographically important center, given by the meeting between HinduKush, Karakoram, the Himalayan ranges and the Indus river". Fr. Barkat continues: "This area was linked to the Silk Road, which connected China with the Persian Empire and beyond, with Syria and Constantinople. From 500 AD the Silk Road was the link between China and Mongolia through what is now Northern Pakistan and Central Asia". The cross of Kovardo weighs about 4 tons and is made of limestone marble and is 6.7 feet high and 6.4 feet wide.

Al Jassasiya - Here, people centuries ago used a series of low-lying limestone outcrops as a canvas on which they carved symbols, motifs and objects that they observed in their environment. Overall, archaeologists have found a total of some 900 rock carvings, or "petroglyphs," at Al Jassasiya. They are mostly enigmatic cup marks arranged in various patterns, including rows and rosettes, but also eye-catching representations of sailing ships, usually seen from above but also depicted in linear profile, among other symbols and signs. "Although rock art is common in the Arabian Peninsula, some of the carvings in Al Jassasiya are unique and cannot be found anywhere else," Ferhan Sakal, head of excavation and site management at Qatar Museums, told CNN, referring to the petroglyphs of ships seen from a bird's-eye view. "These carvings represent a high degree of creativity and observation skills [on the part of] the artists who made them," he said. "Also [of] abstract thinking, as they were not able to see the dhow (a traditional ship) from above." The most prominent pattern involves two parallel rows of seven holes, leading some to believe that these were used to play mancala, a board game popular in many parts of the world since antiquity in which two contestants drop odd and even numbers of small stones into the depressions. Others have disputed this theory, pointing to the fact that some of the holes at Al Jassasiya are too small to hold any of the stones, while others can be found on slopes -- an impractical choice that would have resulted in the counters falling out. Further suggestions include the cup formations being used in some way for divination; or for the sorting and storage of pearls; or as systems to compute the time and tides. 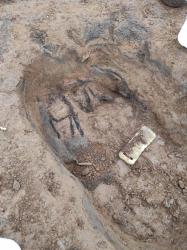 Seyðisfjörður - Four graves dating to the settlement period (late 9th, early 10th century) have been discovered in Seyðisfjörður, eastern Iceland. The burials were richly furnished with grave goods indicating the deceased were of high social status. The first of the tombs found is a boat burial, the first boat grave found in the East Fjords and one of only 12 boat graves ever found in Iceland. Grave goods include a spear, a silver brooch, a silver ring, beads, a hnefatafl  game piece and a Borre-style belt buckle. Two of the four graves contained the remains of horses buried with the human, and one of the two held the skeletal remains of a dog too.  The fourth grave belonged to a woman. She was buried with a pair of oval buckles and a necklace of 11 glass beads. Also found in her grave was a leather purse containing a Norwegian whetstone and flint. The graves were found 110 yards or so from the Fjörður farm mound. According to the Landnámabók (Book of Settlements) saga, the chronicle of the Norse settlement of Iceland written in the 12th century, the first settler in Seyðisfjörður was one Bjólfur from Voss in Norway who established the Fjörður farm. While the Landnámabók was written three centuries after the events it describes, it also documents accurate and detailed historical data, including the names and descriptions of more than 3,000 people and 1,400 settlements. It is possible that the individuals buried in the four graves are listed in the Book of Settlements. They may even be related to Bjólfur. One of them could even conceivably be Bjólfur himself.