Le Caire - Archaeologists working in Cairo have uncovered remains of ancient buildings and a haul of artifacts thousands of years old. Egypt’s Ministry of Antiquities said in a statement released Sunday that a joint German and Egyptian excavation team had recovered relics and the remnants of a temple and other structures at a site dating back to between the 6th and 2nd centuries B.C. The excavation area, known as Area 251 on Mutasim Street in Cairo’s al-Matareya neighborhood, was found to contain remnants of a temple to Nakhtenbo I—a ruler from Egyptian antiquity—as well as royal statues believed to be far older. The statues date back to Egypt’s 18th Dynasty. That was the first dynastic period of Egypt’s New Kingdom, when the ancient civilization reached its apotheosis. The era spanned from 1549 to 1292 B.C., making the statues at least 3,300 years old. The head of Egypt’s Ministry for Antiquities, Ayman Ashmawy, revealed that several other features, including carved limestone blocks and a structure from the Ptolemaic period (beginning in 305 B.C.), that housed ovens for making bread, were also recovered. The Ptolemaic period was ushered in following the death of Alexander the Great in 323 B.C. and ended with the Roman conquest in 30 B.C. and the death of Cleopatra. Within the temple area recovered in Cairo, German archaeologists reported finding a number of basalt tablets bearing inscriptions and a limestone structure that may indicate the presence of an older temple at the site dating back to the era of King Merneptah. Merneptah, the fourth pharaoh of Egypt’s Nineteenth Dynasty, ruled for ten years, dying in 1203 B.C. according to historical records. On the southwestern side of the excavation site, the archaeologists uncovered a thick brick wall covered in a layer of white mortar. Within the wall they found a number of engraved stones, one of which was made from quartz. Considered the most important of the engraved stones discovered at the site, the quartz artifact shows Pharaoh Amenhotep as a sphinx raising his hands upwards. 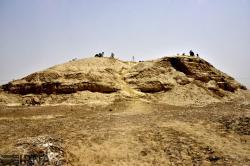 Burnt City -  A team of archaeologists has discovered the remains of a prehistoric monkey in Burnt City, southeast Iran, saying the animal was held in captivity in a cage when it died. Based on surveys and scientific studies on the monkey’s skeleton, the animal was dead in captivity in a cage and it was buried by its owner like a child within a beautiful container, IRNA quoted senior archaeologist Seyyed Mansour Seyyed Sajjadi as saying on Monday. The skeleton was found two years ago in a tomb in the UNESCO-registered Burnt City, Seyyed Sajjadi said. Talking on the importance of the discovery, the archaeologist cited two reasons: “First, this type of monkey is not originally lived in the Iranian Plateau and based on [our] studies, such an animal was found [in a region] from northern India to the borders of China and Central Asia, so the monkey was one of the imported goods to the Burned City.” “Since the Burned City had lots of commercial relations with the eastern territories of Iran such as northern India and central Asia, and there is a lot of information in this regard, we found that the monkey came from there.” “The other issue is that in the ancient world, monkeys were essentially regarded as luxury and aristocratic belongings. And they were imported to be presented to people of certain social classes such as elites, merchants, governors and religious authorities,” he explained. Known as Shahr-e Sukhteh in Persian, the Burnt City is situated in Sistan-Baluchestan province that was once a junction of Bronze-Age trade routes crossing the Iranian plateau. Founded around 3200 BC, the Burnt City was populated during four main periods up to 1800 BC. Previous rounds of excavations showed that its residents had great skills in weaving, creating fine arts such as decorative objects, stone carving, and pottery painting. Shahr-e Sukhteh is associated with four rounds of civilization, all burnt down by catastrophic sets of fire.

IRAN - Kaldar cave - A team of Archaeologists has recently excavated stone tools and a fragment of a fossilized skull, which are attributed to Homo sapiens, from a cave in western Iran. The cave has also yielded weapon fragments crafted by Neanderthals. The findings, some of which date from 21,000 to 40,000 years ago, were unveiled during a special ceremony on Saturday at the Kaldar cave in western Lorestan province, Mehr reported. Kaldar is a key archaeological site that provides evidence of the Middle to Upper Paleolithic transition in Iran. Excavations at the site in 2014–2015 led to the discovery of cultural remains generally associated with anatomically modern humans (AMHs) and evidence of a probable Neanderthal-made industry in the basal layers. The research also offers an opportunity to study the technological differences between the Mousterian and the first Upper Paleolithic lithic technologies as well as the human behavior in the region. Kaldar is situated in the northern Khorramabad valley and at an elevation of 1,290 m above sea level. It measures 16 meters long, 17 meters wide and seven meters high.

Cattedown - A canon gun believed to be from the 1880s has been discovered in the water in Plymouth. The gun was pulled up during maintenance dredging in April 2019, in the water near Cattedown Wharves and is thought have come from a wreck that was recovered off Cattedown in 1887. "The gun was mostly intact but with the muzzle missing. The corrosion products covering the surface at the breech end of the gun formed a thin and hard concretion. Right side of the gun was covered in a layer of modern cement with the remains of a wire rope embedded in it, the cement presuably having been dropped from ships unloading above. "The breech end was in good condition overall, the outer surface has small areas of pitting but the gun still shows all its detail in the mouldings. However there is considerable damage and erosion forward of the trunnions, the muzzle is missing and the broken end of the gun is eroded. The bore is full of concretion and cement."

Ottawa -  Archaeologists are excavating a nineteenth-century military complex on Parliament Hill, which is now home to the Parliament of Canada. Archaeologist Stephen Jarrett said soldiers in the Royal Sappers and Miners Regiment who lived at the site worked to build the Rideau Canal, which connects the capital city to Lake Ontario and the Saint Lawrence River. So far, his team has uncovered a guardhouse, a jail, and at least one of three barracks used to house soldiers and their wives from 1826 to the late 1850s. Artifacts recovered from the site include chin straps, tags, coins, and gorgets, which officers wore to hold their neckties in place. After Ottawa was named the capital of the United Province of Canada by Queen Victoria in the late 1850s, the military complex was torn down and construction of the first parliament buildings began.