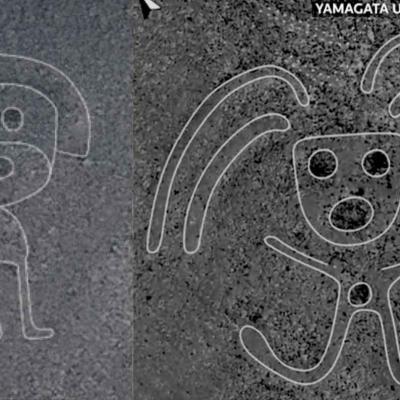 Nazca - In a major archaeological discovery, a team of Peruvian and Japanese researchers have discovered 168 new geoglyphs in the ancient Nazca Plain in Peru, near to the enormous glyphs that remain as mysterious as they are famous. Found during 2 years of aerial surveys, their discovery led to the creation of a new archaeological park to protect them. The famous Nazca Lines are enormous depictions of humans and animals carved into the ground of a flat plain by ancient peoples. Their monumental scale was only discovered after flight, when a pair of eyes could be high enough to see the whole two dimensional image. The originals measure hundreds of yards, but the new discoveries are smaller. Jorge Olano, head archaeologist for the Nazca Lines research program, said the new geoglyphs averaged between two and six meters (6.56 to 19.7 feet) in length. They were made by removing the black stone of the plain to uncover its white soil below, and line series of ancient trails. By 2018, the team had identified 190 geoglyphs by collecting images from aerial surveys and drones, which when added together with this latest batch makes for a total of 358 previously-unknown geoglyphs discovered by the Japanese-Peruvian team. Believed to have been carved between 100 BCE and 200 CE, they depict humans, camelids such as llamas, alpacas and guanacos, birds, orcas, felines, and snakes, and at times can look almost childish. Their purpose, as well as their larger cousins which make up a UNESCO World Heritage Site, is unknown. 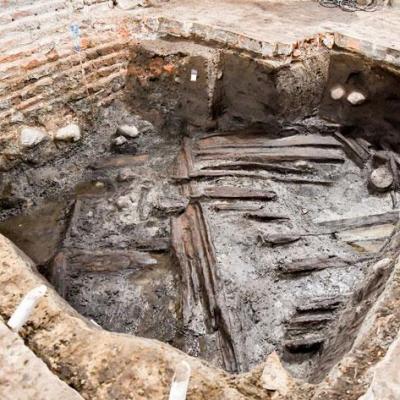 Gdańsk - New dates obtained from traces of a tenth-century Slavic settlement found in the cellars under the Main City Hall in Gdańsk have pushed back the founding of the city to A.D. 930, according to a Science in Poland report. “Radiocarbon dating gave a result between the years 911 and 951, while dendrochronology indicated the year 930,” said Waldemar Ossowski of the Museum of Gdańsk. He explained that previous dates for the founding of the city had been based upon the remains of thirteenth-century buildings and a possible tenth-century rampart found nearby in the 1970s. The wooden structures in the city hall cellars were preserved by a natural wetland, and were probably left in place to add to buildings constructed on the site in the fourteenth century, he added. The wooden structures will be reburied in the waterlogged cellars and secured with geotextiles to protect them, Ossowski concluded.

Germering. - Archaeologists in Bavaria, Germany, have unearthed a 3,000-year-old wooden wishing well overflowing with more than 100 artifacts dating to the Bronze Age. Unlike modern-day wishing wells, where people toss in coins and make a wish, the items in this well were placed there for "ritual purposes" in what is now the Bavarian town of Germering. The artifacts included more than 70 well-preserved clay vessels, including numerous decorative bowls, cups and pots that were used for special occasions and not "simple everyday crockery. Archaeologists also found more than two dozen bronze robe pins, a bracelet, four amber beads, two metal spirals, a mounted animal tooth and a wooden scoop. Wintringham  - A number of decapitated skeletons have been uncovered by archaeologists at a Roman burial site. The discovery, which included evidence of Roman and Iron Age settlements, was made at Wintringham near St Neots, Cambridgeshire. rchaeologists uncovered an Iron Age settlement composed of 40 roundhouses and a network of trackways and enclosures related to farming activities. The Oxford Archaeology team also discovered Roman coins, brooches, a large lead lid or platter, and numerous pottery vessels. A Roman kiln and a large number of quern and millstones, used to grind grains, were also found. Experts said the decapitated skeletons dated back to the third century AD, with 11 out of the 17 burials having their heads positioned by the feet. The individuals were interred carefully, often buried with pottery and in one case, a pottery vessel was found in place of the head, archaeologists said. Tenea - For centuries, Tenea was a lost city only described in Greek myths and historical texts, such as in the legend of Oedipus, the mythical king of Thebes, or the story of Archias of Corinth, who took colonists from Tenea and founded the city of Syracuse on the Italian island of Sicily. Recent excavations by Korkas and the Directorate of Prehistoric and Classical Antiquities of the Ministry of Culture and Sports, have revealed the extent of the settlement area of the city, in addition to a multitude of new discoveries. Four excavation sectors were investigated, revealing a large public building from the Roman period that measures 156 square metres. The building has elaborate stone masonry and contained a cache of 18 silver and copper coins, in addition to an iron pickaxe, an iron key, a stylus and Roman ceramics. Excavations also uncovered a collection of votive figurines, and a cache of 2100 coins in a building among Roman shops. The coins mainly date from the 5th and 6th century AD. Among them are coins depicting Follis of Cyzicus, Theodosius, Marcian, Leo I, Zeno, Anastasius I Dicorus, Justin I and Justinian I, as well as a copper coin from the 4th century AD. A building measuring 145 square metres was found near the Roman commercial centre, which in the lower layers of the foundations contained ceramics from the Archaic and Classical periods, in addition to 4th century BC Corinthian drachma and half-drachma, a significant number of miniature vases, lamps, and figurines depicting birds, horses and other animals. Near the city necropolis, the team discovered a Roman burial monument with an underground chamber. Within the monument, archaeologists found a 1st century BC coin minted in Corinth, a bronze coin from Athens from the Classical period, a lamp with a representation of the god Ares, a glass incense burner, an urn, a cup and a lamp. The chamber beneath the monument contained the burial of a child, placed in a tomb covered with a ceramic roof. To the east of the monument, an 18 metre long retaining wall was uncovered that was constructed from rectangular processed stones. The wall appears to have been interrupted during Roman times in order to build a large cistern, which was probably the primary water supply for the city during the Roman period.

Tilaurakot - Excavations have been started again this year inside the Tilaurakot Palace. A team of experts from the Department of Archeology has resumed the excavation of the Maurya-era pond in the central part of Tilaurakot. Tilaurakot is believed to be the administrative hub of King Suddhodhan and the place where Siddartha Gautam spent 29 years in the fifth century BC. under this campaign, the Maurya-era pond, which was found during excavations last year, was excavated for further research. The survey revealed a structure with an area of 30 by 30 meters slightly sunken into the ground. Physical examinations showed a wide outer wall around it. Excavations revealed that there was a large pond lined with mud bricks inside the structure. During the excavation in 2015, 26 layers of bricks were found and the layers of bricks were arranged in order, said Bhaskar Gyawali, an officer of the Department of Archeology. Bricks of the pond were found to be some 45 cm in length. Gyawali said that radio carbon dating of this structure revealed that the pond was built during the Mauryan period. The department had started a study last year to identify the wall to the south of the pond. About 12 meters of the wall on the southern side was excavated last year. The remaining 11 meters will be excavated this year. During the excavation, the length of the southern wall was found to be 27 meters. This year’s research has revealed the fact that this pond was built at different periods of time.