Kazanovka 14 - On the right bank of the Askiz river, a unique archaeological site from the early first millennium C.E. has been found. It is associated with the enigmatic Tashtyk culture in ancient Siberia. At the new site dubbed Kazanovka 14, archaeologists have gained rare insight into their culture, their adaptations to the environment and their relationships in this “oasis” in southern Siberia. The scholars found new evidence of how the Tashtyks lived their life, after finding the remains of a burned-down wooden structure, and a remarkable petroglyph – an engraved sandstone slab. Their discoveries were reported in the journal of Problems of Archaeology, Ethnography, Anthropology of Siberia and Neighboring Territories. The Tashtyk culture was common in the Khakassian Minusink basin, in southern Siberia, from almost 2,000 to about 1,600 years ago. But the culture is not easy to define. In some ways they seem to have carried on some Scythian traditions. In other ways they evince Hunnic – Sarmatian types of cultures, mixed with local traditions known in the Basin.  Kazanovka 14 not only sheds light on the Tashtyk way of life. It also opens a window to their artistic world and their perception of themselves and their surroundings.The fire might have burned down their house, but signs of the Tashtyks’ artistic spirit survived the conflagration long after their death. Among the ash and debris, the archaeologists found astragalus bones, which are animal ankle bones, with marks incised on them, including crosses, circles, and lines. These are familiar from other sites and might have been used as game pieces. A sense of spaceBut the most exciting discovery of the season was the engraved sandstone slab. The depictions on the sandstone are divided into three panels. The lower has what seemed to be a stylistic representation of trees. The upper features three horizontal lines with smaller stripes in between. The middle panel was bordered by three vertical lines on each side with stripes in between, similar to the upper panel.The panel’s center is oddly empty, with some elements on the side and a semicircle in the middle.

RUSSIE - Salbyk - During an expedition in the Touran-Uyuk Valley, also referred to as the "Siberian Valley of the Kings" because of the trove of artifacts found at ancient grave sites in the region, numerous artifacts were discovered.Using aerial lasers, the archaeologists scanned the area and discovered a wooden chamber with two bodies inside, one belonging to a woman who was 50 years old when she died and a child who was between 2 and 3 years old. The team found numerous artifacts beside the woman's body, including a bronze mirror, gold ornaments, an iron knife and a wooden comb with an engraving on it. Additionally, they discovered a golden ornament resembling a sickle worn around the neck. The vast majority of similar items found at other burial sites in Siberia were found in men's graves. They were considered symbols of belonging to a social group, caste, perhaps warriors - in any case, men. Its presence it in the grave of a woman is a very interesting deviation from this custom. This certainly confirms the unique role of the deceased in the community of the 'Valley of the Kings.

Hastinapur - Archeological Survey of India (ASI) team started excavation at a notified area in Hastinapur called ‘Ulta Khera’ a week ago. The place was included among the five sites to be developed as a ‘iconic sites’ as Hastinapur finds its mention in the Mahabarat and also in ancient Jain texts. Hastinapur is also believed to have been the capital of the kingdoms of Kaurvas and Pandvas. Archeologists claim to have discovered deposits associated with the Mahabharat period. The ongoing excavation may help find a link of it.

An iron meteorite dagger gifted to the ancient Egyptian King Tutankhamun has undergone chemical analyses in a new study to unravel the mystery of how it was forged. Results show that its construction included techniques that weren’t common in Egypt at the time, potentially supporting the interpretation of a letter that indicates the weapon was gifted to King Tut’s grandfather from abroad. Scientists traveled to the Egyptian Archeological Museum in Cairo, Egypt, in 2020 to carry out their investigations, the results of which are published in the journal Meteoritics & Planetary Science. They fired x-rays at the ancient blade to get a better idea of the concentrations of different elements it contained and how it was made. While this revealed a mixture of iron sulfide (among other elements), it was the distribution of its constituents that proved to be most fascinating. The meteorite blade had a cross-hatched texture known as the Widmanstätten Pattern, something that – alongside iron sulfide – is seen in the iron meteorite octahedrite. That this pattern was preserved in the forging of the knife, alongside preserved deposits of troilite, indicates it was made using a low-temperature technique heated to less than 950 degrees Celsius (1,742 degrees Fahrenheit). Moreover, the study results point to an unclear origin for King Tut’s space blade, which was laid to rest alongside him and later discovered within his tomb’s spoils. Its gold hilt appears to have been crafted using lime plaster, an adhesive material that wasn’t used in Egypt until much later but was being used elsewhere. The researchers say this “hints at its foreign origin, possibly from Mitanni, Anatolia, as suggested by one of the Amarna letters saying that an iron dagger with gold hilt was gifted from the king of Mitanni to Amenhotep III, the grandfather of Tutankhamen.”

Poulton - Archaeologists from the Poulton Research Project have discovered a large Iron Age settlement in Cheshire, England, where sacrificial dog burials were practised in exchange for prosperity. The discovery was made in a farmer’s field in Poulton, where archaeologists found a farming settlement consisting of roundhouses made of earth and timber with a thatched cone roof. Over 5,000 artefacts have been uncovered, including beautifully carved antler items, sacrificial dog burials and fragmented human remains, retrieved from up to ten domestic structures. The Iron Age inhabitants farmed crops and kept a range of domestic animals, whilst hunting deer that roamed locally. Exotic items such as a finger ring made of jet were imported, whilst vast quantities of pottery used to transport salt attest to a high-status settlement whose inhabitants used bulk amounts of this valuable commodity for food preservation. One of the roundhouses has foundations of a solid door which held an upper floor level and a screen to shield the interior, in which the researchers believe was the home of an important tribal chief. Over 2,500 find have been recovered from the structure, many of which have been ritually deposited, including a beautifully decorated toggle made from Red Deer antler and a valuable iron farming implement called an adze deposited near the entrance. Next to these items lay the remains of a dog, with a second dog burial placed in the centre of the building. The intentional sacrifice of such valuable animals would have been a significant offering in exchange for the prosperity of the house. 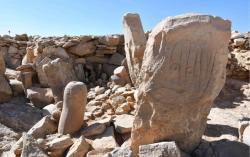 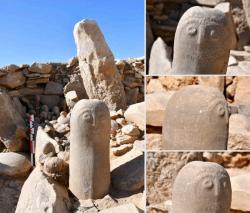 Jabal Khashabiyeh - Mission officials announced the discovery of eight traps stretching along a 20km south to north axis near the border with Saudi Arabia, and signs of early cultural development scattered in the earth nearby. The findings shed light on little-known hunting communities in the Middle East that lived away from the centre of development in the Fertile Crescent, the area constituting parts of Iraq, Syria, Jordan Palestine, Israel and Egypt today. he traps — comprising stone walls and deep holes — have been known as ‘desert kites’ since their discovery from the air in the early 20th century in the Levant and other parts of Asia. However, the first discovered kites date back to between 4,000 and 3,000BC, later than the desert kites the mission is working on in southern Jordan, Mr Abu Aziza said. The desert kites were open from one side to catch animals usually coming from the east. Hunters would then surround the animals and push them into the holes. The hunters lived in semi-circular rooms in camps next to the traps, and exported their output to western regions in the Fertile Crescent. They appear to have worked hard, carefully planning and designing the traps. Flint tools and large amounts of gazelle bone were found at one camp, as well as a sketch of desert kites etched on stone, and a stone model of it. But the inhabitants of Jabal Khashabiyeh sought variation in their lives, and might have only lived in the camps on seasonal bases. Among the artefacts brought from the site to Amman were four stone toys and two stone faces. One of the faces was etched into a rectangular stone and has large eyes and vertical lines on its forehead. The other face is carved on a cylindrical stone. Rituals were also performed, although their nature is not known. Almost 150 snail-shaped marine fossils were found in the middle of the stone floor of the camp, next to what may have been an alter. “They were arranged vertically and very carefully in a certain direction.