Inverness - New historic finds have been made in Inverness during work to better protect the city from flooding. A breakwater and a 19th Century quay wall have been recorded at Shore Street on the River Ness. AOC Archaeology, which has documented the finds, said they helped to give a better understanding of how Inverness has developed since medieval times. The breakwater and wall have been recorded as part of work on the new River Ness Flood Alleviation Scheme. A wrist guard, for use with a bow and arrow, and shards of pottery were also discovered with the remains at Drumnadrochit. The artefacts were found in a burial cist uncovered during work to build a new health centre. Archaeologists said the remains and items were from the Early Bronze Age.

Tatarevo - The emergency funding has been allotted after a police operation discovered that treasure huntershave started to dig up and destroy the Ancient Thracia  archaeological monument near Tatarevo,Parvomay Municipality, reports local news site Plovdivski Novini. Plovdiv’s City Council provides the funding even though the Thracian tumulus is located in a different municipality because the rescue excavations will be carried out by archaeologists from the Plovdiv Museum of Archaeology, and whatever artifacts might be found in the burial mound will be added to the Museum’s permanent collection. The unexplored Thracian tumulus near Tatarevo is a large one, and the team of Kostandin Kosyov, Director of the Plovdiv Museum of Archaeology, is said to expect interesting finds from there. Another Ancient Thracian mound in Plovdiv’s region, Pamuk Mogila located in the town ofBrestovitsa, was saved with emergency excavations, after archaeologist Kostadin Kisyov had spent five years trying to find funding for the digs. Local archaeologists have found at Pamuk Mogila about 80 unique artifacts in the grave of a Thracianaristocrat from the 2nd-3rd century AD. Before the excavations local treasure hunters had dug up a 13-meter tunnel trying to reach the grave under the mound.

Sira - ‘Unscientific’ approach is destroying the rich history and heritage of the Sira Fort in Tumakuru district. Heavy machines rip open parts of a 400-year-old fort, protected by the State Archaeology Department, and replace damaged bricks with modern blocks. The department’s restoration of the Sira fort, known as Kasturi Rangappa Nayaka Fort, has come under fire from local conservation activists who claim the “unscientific” approach is destroying the rich history and heritage of the fort. “Stone ramparts which had developed cracks are being ripped apart using heavy machines… Some of the replaced bricks are new,” said Ameen Ahmed, founder of Tumakuru District Heritage Forum. Brick and masonry work, dating back 225 years when Hyder Ali and Tipu Sultan had hold over the fort, has now been destroyed, he said. “Even the openings for muskets and cannons have been closed…The damage is irreversible,” said Mr. Ahmed. The history of the fort intertwines itself with that of the town, which has over the past five centuries seen the rule of Vijayanagara, Adil Shahi, Mughal and Maratha rulers, Hyder Ali, Tipu Sultan and the Wadiyas. The fort was built in the early 17th century by Nayakas, the local fiefdom. 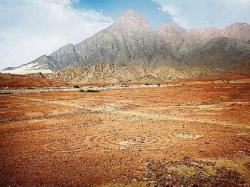 Trujillo - Víctor Corcuera Cueva, representative in La Libertad of the Peruvian Association of Rock Art (APAR), estimates that 200 geoglyphs have been destroyed in Trujillo in the gorge of Santo Domingo within the last 15 years, according to El Comercio.This news follows the discovery of the destruction of the 600-year-old geoglyph in Trujillo on April 15. The geoglyph, known as the Triple Spiral was intentionally destroyed by agricultural invaders, according to investigators.