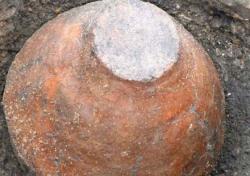 Lynn - An exciting find of an intact Bronze Age burial urn has been made by a team of archaeological experts working on the site of a new link road under construction at Lynn. Ken Hamilton, Norfolk County Council’s senior historic environment officer, said now a collared urn, believed to contain cremated human remains from about 2,500 years ago, had been found.  The pot, which has a thick rim around it, has been removed from the site for further investigation.  Mr Hamilton said: “It is rare to find these urns complete and this one is quite unusual, so it is an exciting find. “The inside of it is being excavated in a laboratory, as it was full of soil. “This soil is being taken out slowly to work out if it was all from one deposition or whether it contained more than one individual’s remains.” He said that after cremation, human remains would have been put in such pots and buried in small pits. The discovery means there was almost certainly people living in that area during the Bronze Age and further archaeological exploration of the site is being carried out. 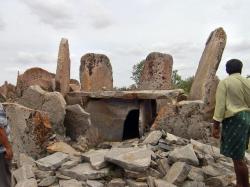 Devandlapalli - A megalithic burial site dating back to 500 BC was detected near Devandlapalli village in Rayavaram panchayat of Tsundupalle mandal in Kadapa district. A study of megalithic culture in Kadapa district was initiated by Robert Bruce Foote and he reported the first megalithic habitation site in 1914 at Yellanur village, which was published in The Foote Collection of Indian Pre-Historic and Proto-historic antiquities catalogue raisonne by Madras Government Press. In archaeological explorations conducted by Associate Professor G. Sambasiva Reddy, Assistant Professor of History and Archaeology and Assistant Profesor of Geology K. Raghu Babu of Yogi Vemana University, a complex of 20 megalithic monuments were noticed and some of them were dolmens and remaining were dolmen encircles with slabs the left over monuments, dolmenoids-cists encircles with slabs. All the monuments were disturbed by treasure hunters, every burial encountered with pottery pieces normally black and red ware, red ware etc. were noticed. Significantly, two of the dolmens on north-western orthostat bearing on the inner surface depicting tortoise, leaf-like structures, human with weapon and sun like diagrams with red ochre and white pigments were noticed. Another dolmen depicted two elephants alongside each other and elephant human figures drawn in white pigment. Chronologically the megalithic assigned in Rayalaseema region to 500 BC based on C14 (Carbon) dating method.

INDE – Chandhore - Not only is this the first time that a department of the 155-year-old Mumbai university has conducted an independent archaeological excavation, experts say it is also the first time that a rural temple complex site dating back to the 11th and 12th century has been found in north Konkan.  "The style of the sculptures and carvings are a clear indication that they belong to the Shilahara period," says archaeologist Suraj Pandit, a lecturer at Sathaye College. "This site also lies on a trade route of the Shilahara period, indicating the vibrancy of the culture of that region in the past." Dalal's research paper on the excavation and its findings will be published in an upcoming issue of the journal of the Asiatic Society of Mumbai. Among the first artefacts that Dalal and his students excavated in Chandhore was a small basalt idol of the Hindu deities Hara-Gauri, ensconced in a square niche along a flight of stone stairs leading to a water tank. A few feet away, a damaged sculpture of the Nandi bull lay buried at the base of a tree, along with some broken stone tablets depicting stories of mythical heroes and the sati practice. They also found a small Shiva temple, broken bits of a Shiva lingam and a tablet carved with the image of Vishnu reclining on a serpent. Dalal plans to continue excavations at Chandhore for at least five years, where he anticipates unearthing more temples and perhaps a group of Shilahara-era village homes.

SRI LANKA – Fa Hien Cave - The Archaeology Department will send specimens of the human skeleton found at the Fa Hien cave excavation site in Bulathsinhala to a renowned radiocarbon dating laboratory in France to determine the actual time period, said Director General Department of Archaeology, Senarath Dissanayake.  "Radiocarbon dating will give us the the actual time period. With the other archaeological findings from the place where the skeleton was found, we can assume that this would date almost 37,000 years," Dissanayake said. According to Dissanayake, the site will be preserved in the same location of the excavation site. "A large rock lies beneath the soil layer with artefacts. We have the technology to remove the entire site without damaging it however, it will be best if we preserve it as it is," he said. This is the first complete human skeleton found in Sri Lanka from the world renowned archaeological site, the Fa Hien cave in Bulathsinhala of the Kalutara district. More evidence is currently being unearthed about man's eating habits, rituals and equipment made out of stone.

Struma - Archaeologist Filip Mihailov: ‘’ During the excavation of Struma Motorway has revealed interesting and complex Necropolis. :I accidentally an hour ago was informed that we have found the tomb of Philip of Macedonia. This could be true only as far as I'm Filip and I explore an extremely difficult and complex subject. It could be true only if it is my tomb otherwise not. I have no idea how and where did it get this misunderstanding, but I suppose it's possible because I shared with local journalists that the size and chronological scope of our subject is comparable to the cemeteries so big and important as the Vergina, where the Greek colleagues suggest for one the tombs, that of Philip of Macedonia. In fact and this is debatable, but this is a problem of the Greek colleagues. The subject is extremely interesting, very large and very complex, in chronological range of very long use. There is no Tomb of Philip of Macedonia and it is not possible there to be such.. Sites of similar size happen once in a lifetime and not to every archaeologist. This is an extremely complex and difficult to study necropolis with burned corpses. There are facilities built by several species – there are rectangular structures, circular structures. Burning corpse ritual is beyond the burial facility and so far we have not found a site for cremations. We have no idea where it is exactly, but we now that it is not within the cemetery. In chronological range so far what we have is material from the late 9th century BC to the early 4th century BC. I.e. we have duration of use of about five centuries.

USA - Pequot fort - Most local residents are familiar with the massacre and burning of the Pequot Indian fort in 1637 by English forces and their Native American allies. What is lesser known is that as the surviving 75 British soldiers and 200 allies retreated toward ships on the Thames River, they had to fight off fierce attacks from 300 Pequots and at one point may have burned a smaller Indian village they came across. Now Kevin McBride, the director of research at the Mashantucket Pequot Museum and Research Center, with help from 20 college students from across the country, is spending the summer in Pequot Woods retracing the steps that Capt. John Mason and his men took during that retreat. So far the team has found musketballs, gun parts, bent arrow points, gun flints, tools, buttons and other artifacts that have helped them map the soldiers' steps. Using metal detectors, team members meticulously examine grids that are 10 meters square before moving on to adjacent areas. They have also been digging test pits, hoping to find evidence of the destroyed village. "Right where we're standing they were fighting off repeated Pequot attacks," said McBride, whose team uses historic documents and descriptions of the battle to gather clues about where to search. So far McBride and his team have completed a mile of the search and have two more to go, as the retreat stopped short of the Thames. They plan to continue their work through the fall.

Fontainebleau - A hairpin belonging to 16th century French Queen Catherine de Medici has been discovered at a royal residence outside Paris. What has conservators scratching their heads is exactly where it was found: down a communal toilet. Officials said it’s the first time in modern history that a possession of the Renaissance royal has been found at Fontainebleau Palace. Though the queen was renowned across Europe for her lavish jewelry, much of her collection has been lost, sold or stolen over the centuries. The rare 9 centimeter-pin was identified easily because it bore interlocking C’s - for “Catherine.”
The artifact was found by accident as archeologists dug around the toilet to prepare the surrounding area for restoration. Droguet called the find a “mystery.” “But what would Catherine de Medici be doing there? Maybe it was a lady-in-waiting who took it. Perhaps it just fell in.”