INDE – Pattadakal- As a part of their 'visual walkthroughs' that they created for monuments across the world (including the Taj Mahal), Google has tied up with the Kannada and Culture Department (KCD) and has prepared digitised 3D models of several of its heritage sites and museums that can be viewed from your computer. These give a real-life view of the places and is likely to boost tourism in the state that hosts some world-famous heritage sites like Hampi and Badami among others. Those covered under the project are Hampi, Badami Caves, Fort Complex of Chitradurga, Chamundi temple at Mysuru, Jaganmohan Palace, Mysuru Palace, Rani Channamma Fort, Bhutanatha Temple complex, Group of Monuments at Pattadakal, Anegundi Fort, Kaliya Masjid, St Philomena's Church, Oriental Research Institute, Gokarneshwara Temple and Mahakuteshwara temple complex. 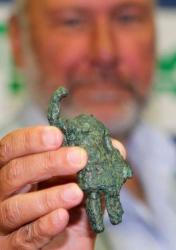 Missionis - A mutilated figurine of Ancient Roman god Mars has been found by archaeologists during theexcavations of the Early Byzantine and medieval Bulgarian city of Missionis, also known as Krum’s Fortress, whose ruins are located near today’s northeastern city of Targovishte. The Mars figurine had its head, arms, and legs removed as part of an anti-pagan ritual, according to the Bulgarian archaeologists. 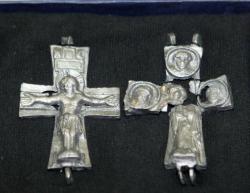 Missionis - The 14th century AD lead cross was actually discovered during the excavations of the medieval city of Missionis / Krum’s Fortress back in 2008 but its conservation and restoration have taken a long time, and it has been shown to the media and the public just now. The cross, which has compartments for keeping holy relics of Christian saints, appears to date to the last years of the Second Bulgarian Empire (1185-1396 AD), before its conquest by the invading Ottoman Turks at the end of the 14th century. The lead cross reliquary from the Late Middle Ages features depictions of the crucified Jesus Christand the praying Mother of God (Virgin Mary) next to him as well as three figures which are believed to represent the first followers of Christ – the apostles Andrew, Peter, and Paul.

ROYAUME UNI – Flodden - The archaeology team of the Flodden 1513 Ecomuseum project has announced the last in the current series of excavations. Taking place at Ladykirk, immediately north of Norham Castle, the team hopes to unearth the key to the Scottish attack on the castle, the location of the Scottish artillery emplacement. The site has been specifically chosen due to a geophysics report showing evidence of hidden anomalies. The dig will last 11 days, September 3-14. 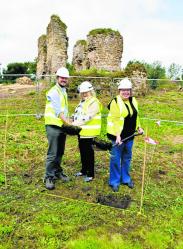 Lochore Castle - The Big Dig – Lochore Castle officially began on Wednesday, with the first turfs being cut by Anne Hay and Mary Clarke, of the Benarty Heritage Preservation Group. Anne commented, “The start of the dig has been long awaited, the feeling of anticipation has been building as today drew closer. “I hope we uncover many artefacts that help explain the history of Lochore Castle.’ The Big Dig is scheduled to take place from the 12th to 30th August, within Lochore Meadows Country Park. The Living Lomonds team, with help from archaeologists at OJT Heritage and community volunteers, are searching for artefacts and structures, which will help explain the hidden history of the Castle and the knights who once lived here. It is hoped that evidence may be uncovered that shows the site was occupied even before the Castle was built. Historic Scotland has given the Living Lomonds permission to excavate three trenches. The Island Trench, located over a collapsed section of the courtyard wall around the keep, the Tower Trench situated over the defensive round tower, and the Harbour Trench which aims to uncover a possible harbour.