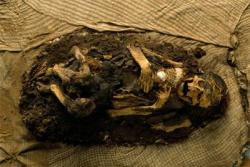 Lima - A mummy, apparently of a young woman, was abandoned on a Lima street along with ancient ceramic artifacts, a forensic expert told Peruvian media. The mummified remains of a woman around 20, according to the opinion of medical examiners, were found by a security guard Sunday night on a street in the La Victoria district, RPP radio said on its web site. The mummy, which was in a fetal position, with its legs bent up against its chest, was found on a pile of trash with some ceramic containers - and moulds to manufacture them. The person who found the mummy and the other items called the police and the officers got in touch with the prosecutor's office to proceed with the removal of the mummy. After making a preliminary review, medical examiners told RPP and other local media that it was the complete skeleton of a young woman, but they said that additional tests will be needed to confirm the age of the remains. In Lima, there are numerous archaeological sites linked to the cultures that flourished before the Inca empire and those sites attract traffickers in cultural heritage items, who steal assorted artifacts and sell them illegally to collectors.

- ROYAUME UNI – Sittingbourne - An archaeology project which probed scores of Anglo Saxon graves in Kent is closing because it has run out of cash. Sittingbourne had been running since 2008 when a 1,400 year-old graveyard was uncovered on The Meads development site in the town. Volunteers have spent the last two years analysing hundreds of items, including 69 Anglo-Saxon graves. Project manager Dana Goodburn-Brown said: "This is a really high status graveyard. We've never excavated, with modern techniques, a cemetery this size and of this quality." About 2,500 items were found on the site and only half have been looked at so far.  Of those examined, 500 are awaiting high-tech analysis which will provide further revelations about the lives of people who lived in Sittingbourne 1,400 years ago. Ms Goodburn-Brown said: "This is an area that people have referred to as the Dark Age - there's nothing written down so we are finding out a lot about the people that lived here. "We are getting down to the fine intricacy of the bugs that were around at the time, and the plants that grew and the clothes people were wearing." The finds have included jewellery, weapons and precious personal possessions but, without funding, the finds will go into dry storage and may never be looked at.

- PAKISTAN - Tibba Singarwala - Encroachers continue to occupy the centuries old mound (Tibba Singarwala) in Kamalia despite notices issued to them by a court. After confirmation that antiques dating back from 4th to 16th century had been discovered during the initial excavation of the mound, a PC-1 amounting to Rs four million was approved to carry out archaeological excavations and conservation work. An Archaeology Department team headed by Harappa Museum Curator Muhammad Hassan carried out the excavations in 2010, which were completed in 2011 as per plan. According to the revenue record, Tibba Singarwala, covering an area of 20 acres and located at Chak 742/GB, Kamalia near Ravi River, is owned by the Punjab Archaeology Department. It is 45ft high from the surrounding area and about 70-80 houses, including cattle pens, have been constructed on it without any approval. Before starting work on archaeological excavations, notices were issued to the mound dwellers to vacate the state land under the Antiquities Act 1975. 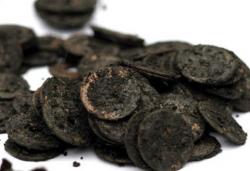 Yen My -  In late 2007, a private company  destroyed an ancient tomb in Yen My district, Hung Yen province. According to workers who were involved in destroying the tomb--this ancient tomb was built by a compound of oyster shells, lime, stone powder, etc. The company hired a dozen of workers and used drilling machines to work for three days to break the tomb.  There was a red coffin inside the tomb. The coffin was covered by liquid of over 50cm high. When the coffin was opened, the fragrance of perfume spread over a vast area.  There was the body of an old man inside the coffin. The man is around 1.60m tall. He looked like being buried for not a long time. His hairs and eyebrow were untouched. His skin was soft and ruddy. The mummy was covered by many layers of cloths and wore a long pair of booths. Believing that the mummy was buried with gold and jewelries, people cut off cloths and clothes of the mummy to seek gold. They took many items buried with the mummy, including hundreds of ancient coins. The body was then buried in a ready-made tomb build by the private firm. However, the ready-made tomb was built to contain bones while the body was intact, so workers broke off bones to put the body into the tomb. According to locals, this is the tomb of a duke of the Le dynasty. The public was very discontented over the case.

- VIET NAM – Nhat Tan - This ancient tomb was also destroyed by a group of people without permission of the authorities. This tomb was discovered in April 2005 in a peach garden in Nhat Tan, Hanoi. The tomb had three layers. The outer layer is 1.5cm thick, made by mortar, molasses, sticky rice powder and do paper. The second layer is the outer coffin, made of wood, 9cm thick. The coffin is made by canary wood of 10cm thick. The mummy was a man of 60 years old. The mummy was covered by cloths and soaked in perfume. The mummy was exposed by workers before archaeologists arrived. The mummy was buried with three pillows, a pair of boots, four silk blouses, 10 brocade blouses, 9 ao liem (blouse for the dead), two cloth bags. Items show that the mummy is a rich man in the late 18th century. The mummy was buried at the Nhat Tan Cemetery in May 2005.