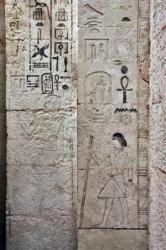 Abousir - Archaeologists have unearthed a 4,000 year old tomb outside the Egyptian capital containing what they believe are the remains of a prominent doctor to the pharaohs, officials said on Tuesday. The tomb, part of a 21 metre (70 foot) by 14 metre (46 foot) plot, with four-metre (13 feet) high walls, was discovered at Abusir, southwest of Cairo, senior antiquities ministry official Ali al-Asfar said."This discovery is important because this is the tomb of one of the greatest doctors from the time of the pyramid builders, one of the doctors closely tied to the king," Antiquities Minister Ibrahim Ali said in a statement. Asfar said the area in which the grave was found appeared to be a family plot and the Czech team of archaeologists was now looking for mummies of relatives. Abusir, a vast necropolis dating back to Egypt's Old Kingdom, houses the pyramids of several pharaohs of the Fifth Dynasty, which began its rule shortly after 2,500 BC. 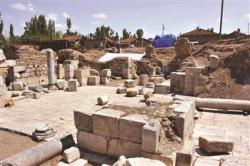 Sebastopolis - Gaziosmanpaşa University Archaeology department academic Şengül Dilek Ful said for a very long time Sebastapolis had not hosted any excavation project and this would be the first one for many years. The excavation works will be done with the protection of Tokat Museum officials. “Roman bath” and “Byzantium Church” buildings have been cleaned and the excavations started with this cleaning, said Ful. The excavations are still continuing to clean the area of the heating system and in the coming years the architecture of the hamam and other buildings are expected to be excavated, she said.Architectural pieces recovered during the diggings organized by the Directorate of the Tokat Museum in 1987 showed that the city was an important settlement during the Hellenistic, Roman and Byzantine periods. The artifacts recovered at the Comana Pontica (Old Tokat) are very similar to those recovered from the city of Sebastopolis, and so it is probable these two ancient cities had a close relationship in the past.Sebastopolis is at the crossroads of the east to west route and south and central to north route. This shows the importance of the city during the Roman and Byzantine periods. The ancient city was surrounded by a city wall made of small, neatly cut stones put together without using mortar. A circular shape temple was discovered at the northeast side of the city, it was made of marble floor. The baths are situated at the eastern part of the Sebastopolis, where the water needed was recovered from the thermal spring located about three kilometers to the southwest.

Paston -An £88,000 Heritage Lottery grant will pay for a community project at Fane Road allotments in Paston, Peterborough to unearth a Roman Villa that has gone undisturbed for 1,700 years. The funding has been awarded after the remains of the building were uncovered during excavations that took place prior to housing development at nearby Itter Crescent, Walton, between August 2011 and February 2012. Only part of the villa was excavated during the building work by Bellway Homes (East Midlands), in Itter Crescent, and it is thought the rest of the villa may lie under the existing allotments.

CHINE - Shatang -A large-scale neolithic site, including a rare cave dwelling, has been unearthed in northwest China's Ningxia Hui Autonomous Region, sources with the regional institute of archaeology said on Tuesday. Archaeologists have been working on the site, which is located in Shatang Township, Longde County, since July 10, said Fan Jun, head of the archaeological team. Up till now, over 400 square meters of the site, including seven ancient house remains, six half crypts and a cave dwelling have been excavated, Fan said, adding that the excavation is expected to be complete by the end of October. "The cave dwelling is an important finding from the site as it is rare to see such an intact and well-preserved building site dating back to the neolithic times between 4,300 and 5,300 years ago," Fan said. The finding is helpful for research on the production forms of ancient humans and their way of life, he said. Along with the ancient building sites, pottery, stone tools and bone tools have also been unearthed. Judging from these ancient utensils, archaeologists believed the neolithic site could be traced back to about 4,500 years ago. 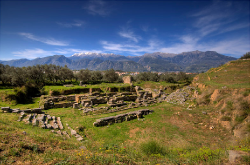 Sparte -It stands for its size, quality and the luxury of its construction. The ancient theatre of Sparta, built around 30-20 B.C., is located north of the contemporary city of Sparta, and remains a distinguished monument to this day, despite the ravages of time and past adventures, such as when its auditorium was destroyed to make Byzantine houses and shops. In ancient times, the theatre used to deeply impress the visitors. For example, the Greek traveler and geographer of the 2nd century AD Pausanias described it with the following words: “this theatre made of white stone is sight worthy.” Its size was also impressive as it was one of the largest ancient theatres, holding a capacity of 16,000 spectators, following the tradition of the earlier Peloponnesian theaters of Epidaurus and Megalopolis. The visible construction today dates back to the Roman times, with many elements of later times until the end of the 4th century A.D. One of its distinguishing features, is that it consisted of a mobile stage, as the theatre also used to host several events. The stage was kept in a special “stage-case” under the hangar that was built at the west lane. In addition, one of the remarkable elements of the monument is the quality and luxury of construction, which is reflected by the local white marble used in its building. Since it is considered to be of immense importance, the recent recommendation of the Central Archaeological Council, gave the green light for the study of its rehabilitation. The study focuses mainly on the damage that the stone elements of the theater have suffered (those made of marble and limestone) from erosion, the loss of material and the fractures caused by the growing of plants, the engravings and graffiti, while relevant damage has also occurred at the masonry of the monument. The road is now open for the correct documentation of the situation, of the theatre parts, and also for the cleaning off of all deposits, such as vegetation and microorganisms, or those brought by human hands such as graffiti. 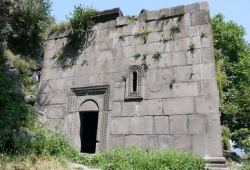 Lori - Rainwater has seriously damaged frescoes at the ruins of the twelfth-century monastery of Kobayr in northern Armenia. Depicting Christ and the twelve apostles, the frescoes are the now object of a joint Armenian-Italian mission aimed at renovating the works of art. The ruins are also decorated with elaborate inscriptions in both Armenian and Georgian.  The monastery was builton a shelf of a gorge by the Zakarids and converted into a Chalcedonian monastery. A bell tower in the middle of the complex was built in 1279 to house the tombs of Mkhargryel Zakarian and his wife Vaneni.