Jisan-dong  - “Turtle, turtle, put out your head. Or else I will roast and eat you.” It is a part of “Gujiga,” the founding myth of the Gaya Kingdom, an ancient confederacy of chiefdoms in what is now the southern part of the Korean Peninsula. The myth had it that when the people of Garak, an old name of Gaya, sang the turtle song, the heaven sent six princes to found six Gaya chiefdoms. The myth was recorded only in books including the Gaya Chronicle of Samguk Yusa, or the Memorabilia of the Three Kingdoms. However, archaeologists have discovered the first relic depicting Gaya’s founding myth in pictures. The Daedong Culture Foundation, which excavated the Jisan-dong Tumuli in Goryeong, North Gyeongsang Province with approval from the Cultural Heritage Administration, said Wednesday that it discovered a clay bell, which has pictorial depiction of Gaya’s founding myth, at a fifth-century tumulus. The bell, which was publicly displayed at the Daegaya Museum in Goryeong, is measured at 5 centimeters in diameter. Examined through a magnifying glass, the bell had six patterns on the surface -- a phallus depicting the top of Mount Gaya, a turtle shell, a man in a crown, a dancing woman, a person looking up at the sky, and a sack on a rope being descended from the sky.“Each picture matches what is described in the Gaya Chronicle,” said Bae Seong-hyeok, the head of research at the foundation. “This is the first time in Korea that a relic with visualizes an ancient founding myth carried only in books.” He added that the relic also makes it possible to infer that the myth of a founding father being born from an egg was common among Gaya chiefdoms. Archaeologists also discovered the teeth and a piece of the skull bone of a child along with the clay bell. Based on the findings, the foundation presumes that the occupant of the tumulus was a four- to five-year-old child who was about one meter tall. Cho Yeong-hyeon, head of the Daedong Culture Foundation, said that considering the bell was found near the left thigh, it seemed to have been worn on the wrist or held in the hand. He estimated that the relic dated back to the fifth century, considering the shapes of clayware, ironware and tools excavated together.

BELGIQUE – Bruxelles - Researchers from the CReA-Heritage (Research Centre for Archaeology and Heritage), in collaboration with French and Italian counterparts, looked under the Grand-Place and the neighbouring streets in May 2018, scanning the archaeological sub-stratum using two non-invasive techniques, namely ground radar and electrostatic prospecting.  These new techniques have enabled a three-dimensional mapping of structures and objects buried under the historic heart of Brussels.  A large number of underground structures that correspond to different stages of development are revealed by the series of images. They provide information on its formation and evolution from the Middle Ages to modern and contemporary eras.  The researchers identified various hidden networks (water supply and purifying systems in particular) and the locations of various fountains that adorned the Grand-Place between the 14th and 17th centuries.  They also discovered earlier medieval habitat structures that date previously to the origin of the Grand-Place site. Before the 1695 bombing by King Louis XIV French troops, "the Place was smaller so that traces of preserved houses are perfectly visible," Blary continued. "The Grand-Place had been expanded (after the bombing, ed.); the two pillar elements, la Maison du Roi and l'Hôtel de Ville, had been perfectly preserved in situ, but the rest had been totally remodelled. We long believed that everything had been completely rebuilt after 1695, but many Medieval elevated elements had been integrated into the reconstruction. In fact, the facades were redone, but on already existing Medieval dwellings which, for some, had remained standing." The results will soon be published in scientific articles.

CHINE - Nilka  - Archaeologists have recently discovered an ancient stone architecture dating back around 3,000 years in northwest China's Xinjiang Uygur Autonomous Region. The regional cultural relics and archaeology research institute said Thursday that the large prehistoric stone architecture was found in Nilka County in Kazak Autonomous Prefecture of Ili. The stone platform is around 120 meters square, surrounded by polished stones. Stone walls and ashes mixed with coal blocks, as well as pottery, stone artefacts and animal bones were unearthed within the platform. The platform is the largest and best-preserved prehistoric stone structure ever found in Xinjiang, according to Wang Yongqiang, of the institute. The structure is part of the Jartai Pass Site, which dates back to 1,600 BC to 1,000 BC. Two excavations had been conducted in Jartai Pass Site between 2015 and 2016, leading to the discovery of 17 house sites, two kiln sites, two tombs, as well as 200 sites of ash pits, coal piles and smelters, and more than 1,000 items. The latest excavation was carried out by the regional cultural relics and archaeology research institute and Renmin University in 2018. The platform is about 1,000 meters to the south of the housing sites. Archaeologists believe they both belong to the Bronze Age."The new findings are very important to study the history of the Kax River basin in the Bronze Age," said Wang.

CHINE -  Yangjiang  - Chinese archaeologists have found 143,000 relics from a cargo ship from the Song Dynasty (960-1279) that was salvaged in the South China Sea in 2007, sources here said Wednesday. The massive excavation operation that has been going on for years is drawing to an end as archaeologists are now clearing the cargoes in the last few cabins at the end of the ship, said Cui Yong, vice director of the Guangdong Institute of Cultural Relics and Archaeology, and head of the ship's archaeological team. He estimated that the total number of relics might exceed 160,000 pieces. Porcelain products, gold, silver, copper and iron relics and copper coins are some of the diverse treasures found within the Nanhai (South China Sea) No.1 vessel. Bamboo and wooden lacquers and preserved remains of plants and animals have also been recovered from the ship. The remains of the ship body measure 22.1 meters long and 9.35 meters wide. Archaeologists believe it is one of the largest and best-preserved Song Dynasty ocean-going merchant trade ship ever discovered. Since its salvage, the ship has been moved to the Maritime Silk Road Museum in Yangjiang city of Guangdong Province, where it has been preserved in sea water and sand in its original state, as it had been for hundreds of years on the sea bed. Upon completion of the excavation of relics on the ship, archaeologists will start excavating the main body of the ship, according to Cui.

Jerusalem - An unusual clay jar fragment depicting a ‘grotesque’ ancient deity for scaring away evil spirits has been discovered in Israel. The fragment, which dates back to the 4th or 5th century B.C., was unearthed as part of the excavation in Jerusalem’s famous City of David. Archaeologists from the Israel Antiquities Authority and Tel Aviv University found the artifact in a large refuse pit with other fragments from the time of Persian rule over the ancient Kingdom of Judah. The jars, which were common during the Persian era, are known as “Bes-vessels.” “In Egyptian mythology, Bes is the protector deity of households, especially mothers, women in childbirth, and children,” the Israel Antiquities Authority explained in a statement, noting that the deity became part of Persian culture, where he was regarded as the defender of everything good. Synonymous with music and dancing, depictions of Bes often adorned the walls of houses, or as amulets worn around the neck. “Bes usually appears as a kind of bearded dwarf with a large face, protruding eyes and tongue sticking out when he is wearing a feather hat,” according to the Israel Antiquities Authority. “This grotesque figure is apparently intended to evoke joy and laughter and drive away the evil spirits.” 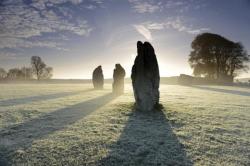 West Kennet - Prehistoric tribes living near West Kennet and Marden could have been the hosts of some of the first gatherings in British society, according to new research which has studied pig bones dug up at both places. Isotopic studies of pig bones have revealed that the animals were not native to Wiltshire, leading to a theory which says they were brought to the county by visiting tribes, then slaughtered and eaten in huge feasts which were part of giant social gatherings. Analysis of pig bones found alongside one of the avenues which runs from West Kennet Long Barrow to Avebury's historic stone circle shows 100 per cent of the bones tested were non-local, while 87 per cent of those tested from digs at Marden Henge came from other areas of the country. "This is the first real evidence that we have of people coming from all over Britain to Wiltshire," said David Keys, archaeological correspondent for the Independent newspaper, who has been documenting the research as part of theories into the development of civilisation. "The isotopic tests show where the pigs grew up. At Marden only 13 per cent of the bones that were examined were local and the rest had been brought in from substantial distances away, even hundreds of miles away. At West Kennet it was 100 per cent." Some of the pigs had been born in Scotland, and North East England, and on the coast, and Mr Keys feels sure they would not have been herded for so far, but were probably carried in carts or even on litters to be used for feasting."The isotopes prove that some of the pigs were born by the sea because more salt shows up in their teeth and bones," he added. Pig feasts were a common feature of early societies in other cultures, he added, including New Guinea where they are still held today.