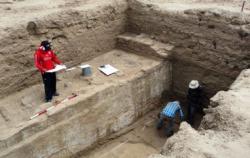 Zaña -  A small temple has been found in Cerro Mata Indio, a mountain located in the Lambayeque region in northern Peru, which is believed to match Moche typology and precede great sanctuaries found in that area of the country. The temple is thought to date from between 1700 and 1800. To Walter Alva, Director of the Royal Tombs of Sipan Museum, it must have preceded big sanctuaries of administrative centers belonging to the peak of Moche culture. “The temple, which is 30-meter wide and 40-meter long, dates back to the earliest stage of the Mochica culture.” Intervention works started in April in order to become acquainted with Mochica populations and the origin of this culture. For this reason, centers and small structures that must have preceded large sanctuaries or administrative centers at that time are being studied. Alva said two small mounds have been found in the south of Zana Valley surrounded by cemeteries that have been illegally excavated throughout the years. “These mounds might be small temples.”  One of Mata Indio’s mounds was marked by different occupations: the center of the structure dated to the Early Mohica, Chimu and Lambayeque periods. They also discovered a white and yellow low platform that is said to be the oldest construction of the place and match the architectural typology of Mochica’s first buildings. The architect also warned the adobe structure has been eroded by heavy rains, which is why it had to undergo upgrading in several occasions after its initial construction. He also highlighted the evident presence of roads to the south in order to cross the desert. “This might imply that heavy rains affected the place in early Mochica’s times and that its origin must have been characterized by small religious and administrative centers that later evolved into huge pyramidal constructions such as Sipan and Pampagrande.”

GEORGIE – Imiri - Archaeologists are hard at work sifting through the dirt at a dig in Imiri, south-eastern Ge​orgia. The scientists believe that the site contains artefacts that could once and for all prove that Georgia is the oldest wine producing country in the world. Eight thousand years ago, during the neolithic era, farming and agriculture were flourishing in the three villages that now make up the Shulaveri – Shumitepe Cultural ruins in Marneuli Valley. And one of the products being grown and harvested proved to be grapes to make wine. Stephen Batiuk is from the University of Toronto: “What is significant about this site is that it produced some of the earliest examples of domesticated grapes, which we believe were involved in the earliest production of wine. We know that a wine vessel was discovered in Shulaveri, which also provides evidence of early wine production. But here (Imiri site) wine could be produced even earlier taking wine production in Georgia all the way back to 6,000 BC.” David Lordkipanidze, is director of Georgia’s National Museum: “The aim of this project is to look at the history of agriculture. It’s not just only the question of the earliest wine and we have found here traces of very old wine making, but as well to look at the domestication of the weeds, of the different agricultural products, which shows that Caucasus and Georgia were part of this big geographical territory, the so called Fertile Crescent, where the earliest agriculture was appearing and first civilisations were spreading.” The Fertile Crescent is a swathe of land stretching from upper Egypt to Mesopotamia, modern day Iraq, Kuwait and northeast Syria. 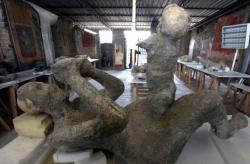 Pompei - It’s been nearly 2,000 years since the deadly Pompeii disaster but one of its most tragic stories is just being fully revealed. Through plaster casts experts have managed to show the devastating scene of a ‘scared boy on his mother’s lap’. It is thought the child, who was around four, had run to his mother as Mount Vesuvius erupted and covered the Roman town in ash in 79 AD. The scene, which was made even more tragic by the presence of the boy’s ‘father and sibling’, is part of restoration work and the study of 86 casts in the laboratory of Pompeii Archaeological Site. The family were found in a part of the town nicknamed House of the Golden Bracelet

Palmyre - The Syrian city of Palmyra, known internationally for its iconic archaeological site, is reported to have fallen into the control of the Islamic State, just days after their victory in Ramadi in Northern Iraq. Images and video clips of the destruction to cultural heritage in Syria and Iraq have been commonplace in the mainstream media in recent months, showing ancient cities, monuments and priceless antiquities destroyed by men with hammers, power tools, bombs and bulldozers. Now Palmyra, among the world's greatest archaeological gems, faces a similar threat. Built two millennia ago, Palmyra not only represents financial gain for the Islamic State through profits from the illicit antiquities market, but it is also strategically located among a network of roads and gas fields. Looting the site and gaining control of the roads could provide an advantage to anyone strong enough to hold it. 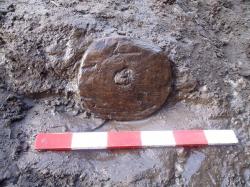 Stafford - Archaeologists have discovered an Anglo-Saxon wooden butter churn lid at a rail development near Stafford.  But radiocarbon tests have revealed the lid of the butter churn dates from the early medieval period. The tests have put a fragment of wood found with the lid as dating between AD715-890, so the lid is from the same period as the Staffordshire Hoard.

ROYAUME UNI – York - Roman soldiers used stadium area to learn building skills for marching camps which offered protection during campaigns in north. When the stadium was built in 1989, archaeologists admit that its distant past as a Roman military camp was little known. An RAF aerial survey in the early 1950s illustrated the obvious visibility of the settlement, but it took until 2002, when York Archaeological Trust began investigating the neighbouring Camp 2 and earthworks in the field below the stadium, for the extent of its former incarnation to become clear. “York was one of the most northern outposts of the Roman army, and this site could well have been where soldiers learned to build the marching camps which offered them protection during their campaigns in the north and during the building of Hadrian’s Wall.

Choccolocco Creek - Harry Holstein held the small piece of chiseled stone in his hand Thursday, freshly dug from the earth in land off of Choccolocco Road in Anniston. Holstein, a professor of anthropology at Jacksonville State University’s department of physical and earth sciences, said the artifact, shaped similar to an arrowhead, was likely the sharp end of a knife, used by the Native Americans.  Holstein and his students have been digging on that privately owned land periodically since 1998. Holstein said Choccolocco Creek and a nearby spring made the area ideal for Native Americans, who believed the springs were “the portals to the underworld.” Creek Indians used nearby Bains Gap to get past Choccolocco Mountain, Holstein said, as he pointed to the gap between the two green hills in the distance. The land had everything Native Americans needed, he said. Much of the artifacts found there —   bits of pottery, arrowheads, points from blow darts, posts and remnants of pits and barriers —  date to the Mississippian period,  which lasted from about 700 a.d. To 1600. Still other artifacts found there suggest that those protective barriers were built outside existing barriers, constructed during the Woodland period, between 1,000 and 2,000 years prior to the Mississippian Period.