Hillborough - An ancient whistle carved from bone has been unearthed at a building site on land thought to have been occupied by families hundreds of years ago. Archaeologists made the discovery at Hillborough on the outskirts of Herne Bay.  The oldest items dug up from the field are believed to date back to the latter stages of the Bronze Age, which ended in 1200 BC. And lead archaeologist Richard Greatorex says the presence of a medieval whistle suggests people in 1000 AD may have lived on the plot, which was most recently used for farming. “It was made out of animal bone, the type of bone we don’t know yet,” he said. “Some of these objects – which includes hundreds of pottery shards – were found a metre deep, others are only 30cm or 40cm down.” Of the items they have so far found, the oldest date back to the Bronze Age, and provide signs of farming activity. Iron Age grain stores have also been found. These would have been raised from the ground to stop their contents from being pilfered by rats and mice. The archaeologists believe they may have discovered farming enclosures spanning all three periods, with some containing pits, livestock shelters and corn dryers. “There’s some domestic activity alongside this agricultural activity in the medieval ones, so it could well be that people lived or worked there,” Mr Greatorex added.

Rosma - An archeological dig at the Rosma ancient settlement site near the city of Põlva has unearthed charred grains from ancient times. There is a slight indentation in the middle part of the Rosma ancient settlement in which archeologists were hoping to find the site of a well. Instead, the dig revealed charred grains. "We believe that there are one or more buildings dug into the ground here and that there was a fire. And we have uncovered grains that makes for the most special find here as only nine or ten have been discovered in Estonia in the past," archeology master's student Mairi Kaseorg said. The unearthed grains will be sent to a laboratory where their age and species will be determined."We have very few burnt cereals that can give us an idea of ancient agriculture. We can speculate as to how old these are. The buildings yielded no shards of ceramics made using a potter's wheel. Therefore, they could be from the Viking age, considering other dates from this site," professor of archeology Heiki Valk said. Gelderlan - Archaeologists have discovered an ancient Roman sanctuary with a relatively intact Roman temple in the Dutch central-east Gelderland province, the country’s cultural heritage agency said, describing the find as "exceptional". Volunteers made the first discovery in 2021 in a city near UNESCO World Heritage Roman Limes - which represents the border line of the Roman empire at its greatest extent in the 2nd century AD - and alerted the agency. "There used to be several temples here. We have found remains of idols, reliefs and painted plaster," it said in a statement. "This is very exceptional (not only) for the Netherlands, but also internationally" it said, adding that while several Roman sanctuaries were known in the Netherlands, this was the first such complete complex and temple found. Complete votive stones and altars dedicated to various gods and goddesses have been dug up on the site which the agency said was in use for centuries during the Roman Empire. 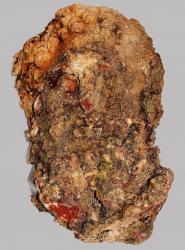 Antikythera - The larger-than-lifesize marble head of a bearded male has been uncovered during an underwater excavation at the Antikythera wreck off the coast of Greece. It has been speculated that the fragment may be the missing piece of a headless statue of “Hercules of Antikythera,” recovered from the Roman-era wreck shortly after its discovery in 1900, and currently held at Greece’s National Archaeological Museum in Athens.  The remarkable find is one of several recently announced from explorations that took place from May 23 to June 15. This was the second session of a five-year underwater archaeological research program initiated by Greece’s Ephorate of Marine Antiquities, running through 2025. Other artifacts discovered include the base of a marble statue of a human figure, two human teeth that are awaiting DNA analysis, and accessories from the ship such as the lead weight for an anchor, iron nails and other metal masses that will eventually be x-rayed. Coole - Irish archaeologist Michael Gibbons identified the ancient fortress in Coole Park while carrying out fieldwork in the Burren lowlands east of Gort in County Galway. Measuring about 400m north-south and 110m east-west, the ancient fortress is bound by turloughs (periodic water bodies located in the west of Ireland) and seasonal lakes, which form part of its defense.  His recent survey of the area indicates that the fortress dates back to between 800 and 1200 BC, adding that it is a unique structure that could have housed hundreds of people at a time.  The fortress is covered by dense woodland but added that he hopes further research and analysis of aerial surveys will uncover several Bronze Age roundhouses located within its ramparts. Palmyre - Aleksandra Kubiak-Schneider, a Polish archaeologist, has been carrying out research in an ancient metropolis in today’s Syria, she found about 200 texts dated mainly to the 2nd and 3rd century CE. All of them contained mysterious phrases in the form of addressing a deity. "He whose name is blessed forever." "Lord of the Universe." "Merciful." For about 100 years scientists have been trying to determine which deity was the addressee of these specific phrases. While looking for answers, the unknown deity was named: the Anonymous God of Palmyra. “These inscriptions were on stone altars intended for burning the fragrant sacrifice of incense, juniper grains and other aromas and for pouring liquids,” Kubiak-Schneider told Science in Poland.The researcher noticed that the specific way of addressing the deity was similar to the hymns sung and recited in the 1st millennium BCE temples of ancient Mesopotamia, when giving thanks for the received help to many important deities: Marduk-Bel, Nabu, Nergal, Hadad and others. The non-use of the name of the god in case of dedication was, therefore, a sign of respect. The Palmyreans were perfectly aware of the names of their deities, the archaeologist argues, they simply elected not to use them. “It is therefore not surprising that the deity's image is not found on the altars, which in this case is not connected with the prohibition on presenting the divine face. There was no one Anonymous God, every god who listened and showed favor to requests deserved eternal praise,” Kubiak-Schneider said. In addition, the research shows that deities had many names and titles used depending on the situation and the person addressing them. “Each name carries a different message, showing different aspects of deities worshipped in polytheistic systems, such as the one in Palmyra or the cities of Mesopotamia, or the Roman Empire,” Kubiak-Schneider explained.