Istanbul - Workers on Istanbul’s new metro system, the Marmoray project, have unearthed a more ancient form of transport. They have discovered an intact wreck of a ship, complete with its cargo, believed to be from the fifth century.  Archaeologists say it is very rare to find such a shipwreck that old with its timber frame and load intact. They say many of the pots and pans on board the ship are broken, but some will be joined back together and analysed to determine what they carried.  Many seeds such as olives, walnuts, apricots and almonds have been found almost perfectly preserved after 1600 years under water and silt.  So far 35 ships have been found in the sunken Byzantine port, leading experts to call it the most important marine archaeological site in the world.

Altai - An ancient child burial ground dating back to the Stone Age has been discovered in the Altai Region, Siberia. Excavations carried out by a local archaeological association led by scientist Yuri Gelmel near the town of Slavgorod also resulted in the discovery of a knife which supposedly belonged to Scythian-era nomads. Among other findings was an earthenware pot, a necessary funeral attribute. Once, this hill housed an ancient nomad cemetery. 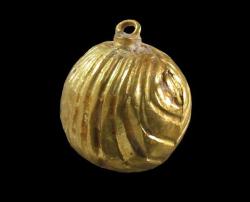 Jérusalem - A tiny golden bell which was lost in Jerusalem some 2,000 years ago during the Second Temple period has been found among ruins near the Old City. The bell, which is thought to have been an adornment which was sewn onto the garments of a senior official, was uncovered during excavation work on a drainage channel in the City of David, an area in the Arab neighbourhood of Silwan just south of the Old City walls. "It seems the bell was sewn on the garment worn by a high official in Jerusalem at the end of the Second Temple period," an IAA statement said. The bell was found inside the main drainage channel taking rainwater from different parts of the city to the pool of Siloam, which is mentioned several times in the Bible. "Apparently, the high official was walking in the Jerusalem street in the vicinity of Robinson?s Arch and lost the gold bell that fell from his garment into the drainage channel beneath the road," it said, noting that Jewish high priests were known to have bells sewn onto their robes. "It is impossible to know for certain if the bell did indeed belong to one of the high priests; however, the possibility should not be entirely discounted." 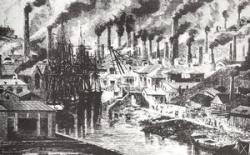 Swansea - One of the Industrial Revolution’s least known, yet most important, monuments is to rise again. The remains of ‘Copperopolis’ – once the epicentre of the world’s copper industry – are to be preserved as a major heritage complex on a currently derelict 12 acre site in Swansea, South Wales. The site is home to 14 historically important listed 19th century industrial structures, including a canal, a locomotive shed, a rolling mill, traces of a narrow gauge railway, a copper-testing laboratory building and two engine houses. One of the great steel steam engines still survives inside its engine house. The area, all that remains of the original hundred acre complex, is to be developed as a heritage centre by Swansea University and the local council. Copperopolis - the world’s first globally integrated heavy industrial complex - helped Britain rule the waves in the late 18th and early 19th century by supplying the Admiralty with most of the copper sheeting it needed to strengthen the hulls of the Royal Navy’s warships. Later much of the copper cable, needed to connect the world telegraphically was also produced there. The complex had started life back in the 1720s when it was founded by merchants from Bristol. One of its initial activities had been the production of copper ‘currency tokens’ used by British slave-traders and other merchants in West Africa. For some 30 years - in the mid 19th century - Copperopolis reigned supreme over the planet’s copper industry, manufacturing almost 70% of the world’s copper goods.

Pennfield - Archaeologists have found evidence that proves First Nations people were in New Brunswick more than 10,000 years ago. For years archaeologists suspected the First Nations history might go way back because there had been small, individual finds, but Hurricane Earl helped reveal even more. But for the first time, a large campsite has been uncovered that proves people moved through the area when ice still covered parts of the province. "We have individual finds and that's how we knew people were here," said Brent Suttie, archaeologist in charge of the site. The site is near Pennfield but the precise location is being kept secret for now. "We had individual spear points that we knew were that old. But it's just we never had the sites to give us contextual information — like what people were eating, how they were living, the structures they may have been living in, what the population size may have been," he sa Suttie said they have found some material in the campsite that came from central Maine. "So, already we know there were some connections with central Maine as early as between 10,000 and 11,000 years," he said.

- INDE – Tipparti - A 200-year-old Panchaloha idol of Lord Shiva in the form of Chandrasekhara Murthy was found at Tipparti in Nalgonda district. The idol, which was confiscated by the police from treasure hunters a few days ago, was handed over by the court to the director of department of archaeology and museums on Thursday. According to the director Prof P Chenna Reddy, the 30 cm high idol weighs 2.545 kilos and represents the inconographical features of 18th Century AD. Standing in ‘samapada sthanaka’, the idol holds ‘Parasu’ and a deer in the upper hands and ‘Abhaya and Varada’ mudras in the original hands. The idol bears all the ornaments and stands on a ‘Padmapitha’. After treating it with chemicals, the bronze idol will be kept on display at the YSR Andhra Pradesh State Museum at Public Gardens in the city for public view.

- ROYAUME UNI – Hebrides - The islands are of particular interest to the team as they have some of the best potential due to the irregular shoreline and the potential for headlands and islands to form as a consequence of changing sea level. For most of prehistory, the sea levels were much lower than they are today, in the last 10,000 years archaeologists have calculated that there may have been up to 10 km of land lost off the west coast of the Outer Hebrides. “In areas where there has been little scouring of the seabed, such as in areas in the long sea lochs of the east and other sheltered locations,  there may still be evidence of the first people to colonise the Outer Hebrides in the Mesolithic some 9000 years ago. Submerged sites can offer preservation conditions rarely encountered on land. With advances in underwater exploration technology, many submerged landscapes have become accessible to archaeologists and there is a growing awareness of the potential for underwater archaeology to transform our knowledge of the human past.

- PALESTINE – Naplouse - Archaeologists unearthing a biblical ruin inside a Palestinian city in the West Bank are writing the latest chapter in a 100-year-old excavation that has been interrupted by two world wars and numerous rounds of Mideast upheaval. Dutch and Palestinian archaeologists are learning more about the ancient city of Shekhem, and are preparing to open the site to the public as an archaeological park next year. The digging season wrapped up this week at the site, known locally as Tel Balata. The city of Shekhem, positioned in a pass between the mountains of Gerizim and Eibal and controlling the Askar Plains to the east, was an important regional center more than 3,500 years ago. As the existing remains show, it lay within fortifications of massive stones, was entered through monumental gates and centered on a temple with walls five yards (meters) thick. The king of Shekhem, Labaya, is mentioned in the cuneiform tablets of the Pharaonic archive found at Tel al-Amarna in Egypt, which are dated to the 14th century B.C. The king had rebelled against Egyptian domination, and soldiers were dispatched north to subdue him. They failed. The city also appears often in the biblical narrative. The patriarch Abraham, for example, was passing near Shekhem when God promised to give the land of Canaan to his descendants in the Book of Genesis. Later, Abraham's grandson Jacob was camped outside the walls when a local Canaanite prince raped his daughter, Dinah. Jacob's sons sacked the city in vengeance. The body of Jacob's son Joseph was brought from Egypt hundreds of years later by the fleeing Israelites and buried at Shekhem. Two millennia ago, the Romans abandoned the original site and built a new city to the west, calling it Flavius Neapolis. The Greek name Neapolis, or "new city," later became enshrined in Arabic as Nablus. In Hebrew, the city is still called Shekhem. The identity of the city's residents at the time remains unclear. One theory posits that they were Hyksos, people who came from northern Syria and were later expelled from Egypt. According to the Bible's account, the city was later Canaanite and still later ruled by Israelites, but archaeology has not corroborated that so far, van der Kooij said. A German team began excavating at the site in 1913, with Nablus under the control of the Ottoman Turks. The dig was interrupted by World War I but resumed afterward, continuing sporadically into the 1930s under British rule. Much of the German documentation of the dig was lost in the Allied bombings of WWII. American teams dug at the site in the 1950s and 1960s, under Jordanian rule. Israel conquered Nablus, along with the rest of the West Bank, in the 1967 Mideast war. Over the years, the site fell into disrepair. The neglect was exacerbated after the first Palestinian uprising in the late 1980s, when Nablus became a center for resistance to Israeli control.