New York - For nearly a decade, keepers of Harlem’s historical flame have insisted — in the face of official skepticism — that a significant antebellum landmark lay beneath an enormous bus depot near the Harlem River. They had plenty of documents to show that the 126th Street Bus Depot in Upper Manhattan occupied the site of a Reformed Dutch churchyard where New Yorkers of African descent had been buried from the 17th century through the 19th century. What they lacked were any remains. Now, they have them. More than 140 bones and bone fragments were found at the site last summer by archaeologists under contract to the New York City Economic Development Corporation. Most compelling of all was a skull, its cranium intact, that most likely came from an adult woman of African descent. 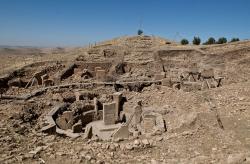 Gobekli Tepe - Gobekli Tepe, an archaeological site in Turkey home to the world's oldest monument, will receive an investment of over $15 million over the next 20 years, it was announced Wednesday at The World Economic Forum in Davos, Switzerland. Promoted by the Sahenk Initiative, the main sponsor, and the Turkish Ministry of Culture and Tourism, the project will support new excavations, build a world-class visitor center, and encourage tourists to visit a unique site which is believed to predate Stonehenge by 7,000 years and Egypt's pyramids by 7,500 years. Standing at the top of a mountain ridge in the southeastern Anatolia region of Turkey, Gobekli Tepe comprises a series of mainly circular and oval-shaped structures which date from roughly 12,000 years ago. The Neolithic site lies at the northern end of what the ancients called the Fertile Crescent, a part of Mesopotamia which was the location for the first city in history, the starting point of writing and the seed of civilization. As the oldest known monument built by man, Gobekli Tepe goes beyond these firsts. Excavated since 1996 by German archaeologist Klaus Schmidt, the temple-like structures consist of T-shaped pillars finely carved with the images of wild animals. The tallest stones tower 16 feet and weigh between 7 and 10 tons.

İznik - Archaeological works are still continuing in the ancient Roman-era basilica discovered at the beginning of 2015 under Lake İznik in Turkey’s northwestern province of Bursa. Forty bronze coins have been found recently in the basilica.  Embossments on the coins have almost completely faded over time but scientific work will reveal their era and the civilization they date back to, according to archaeologists.  Experts say the coins might date back to anytime between the 3rd and 16th centuries A.D.  The Roman-era basilica, which lies in up to 2 meters of water, was discovered while the area was being photographed from the air in order to make an inventory of historical and cultural artifacts. Archaeologists, historians and art historians believe the structure collapsed during an earthquake in the region in 740 A.D. 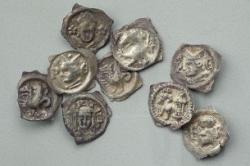 Zurich - More than 200 coins from the early 1300s have been discovered by chance in a forest near Zurich. They provide more clues as to how money networks around Switzerland worked during the Middle Ages.  Researchers believe it could have been contained in a cloth or leather pouch that has since disintegrated and that an animal may have found and scattered the coins at some point.  The coins were quite valuable at the time, amounting to around two months’ income for a preacher in the area, for example.Very few of the coins actually come from Zurich, with most originating in the areas near Basel and Zofingen in Switzerland. Others come from as far away as Freiburg im Breisgau in southern Germany. At the time, it was normal for money from all of those regions to be in circulation in Switzerland.

Lefkada - Archaeological excavations on the Ionian island of Lefkada have brought to light a previously undiscovered and sizeable ancient theater, the culture minister announced on Wednesday. It said the find was made on Koulmou hill toward the end of 2015. Test “sections” were cut in an area on the northeast flank of Koulmou’s middle hill, which forms an amphitheatrical downward hollow ending in a lengthy flat section, the ministry announcement said. It noted that archaeologists knew very little about the city’s ancient theater, which was not mentioned in any ancient sources, though the logs of an early 20th-century archaeological excavation under the direction of German archaeologist Ε. Κrüger, lasting only a few days, recorded the discovery of signs indicating the presence of an ancient theater. The Aitoloakarnania and Lefkada Antiquities Ephorate dug sections in 13 places, which confirmed the existence of the theater and uncovered rows of seats, parts of the orchestra and some of the retaining walls for the stage and other parts of the theater. The ministry said that six sections revealed seats carved from the rock, about 0.73 to 0.90 meters deep and 0.22-0.33 meters high. Others found the orchestra and a section of a wall in a quadrant plan, up to 0.6 meters across. Also found in the sections were portions retaining walls. 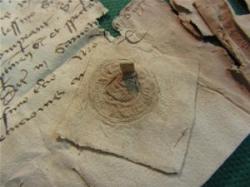 Gniezno - About 1500 documents, showing the functioning of Gniezno ecclesiastical court in the medieval period, have been discovered in one of the rooms of the Cathedral of Gniezno. "Thus, the Gniezno archive became the holder of one of the largest collections of medieval paper documents. Next to Gdańsk and Wrocław - it is the third such collection in the country" - explained Jakub Łukaszewski from the Institute of History of the Adam Mickiewicz University in Poznań.