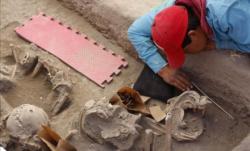 Cholula - Archaeologists found dozens of 800-year-old skeletons at a construction site in the central state of Puebla, Mexico’s National Institute of Anthropology and History, or INAH, said. Workers came upon the remains Tuesday during excavations to install a drainage system in San Andres Cholula, a town 15 minutes by car from Puebla city, the state capital. Besides at least 63 skeletons, archaeologists have catalogued containers and other objects characteristic of the Olmec and Xicalanca cultures. Three months ago, INAH teams discovered 12 other 800-year-old skeletons at a spot about 500 meters (1,600 feet) away from the latest find, and archaeologists say the sites were likely part of a single burial ground. A dozen researchers are now at the Cholula excavation examining the bones and other items, INAH said. Cholula, where 29 pre-Columbian skeletons were found last year, is also the location of one of the largest pyramids in Latin America.

Louxor - A pyramid that dates back more than 3,000 years and built for an advisor to King Ramses II has been discovered in Luxor, Egypt's state minister for antiquities said.  The remains of the large mudbrick pyramid -- whose original height was 15 metres (49 feet) -- was unearthed during excavations on the hill of Sheikh Abdel Qurna by a Belgian mission of the Universite Libre de Bruxelles and Universite de Liege, Mohammed Ibrahim said. "Stamp impressions on the bricks indicate that the pyramid belongs to a vizier of Upper and Lower Egypt named Khay, who held this charge for 15 years during the reign of pharaoh Ramses II (1279 -1213 BC) in the 19th dynasty," the mission said in a statement. "The monument was largely dismantled in the 7th and 8th century AD, when the tomb was transformed into a Coptic hermitage," it said. The discovery is of major importance "since the vizier Khay was known to Egyptologists by a large number of documents but the location of his tomb remained undiscovered," the mission said. 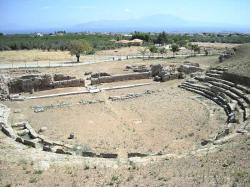 Sicyon - It was one of the largest theatres in Antiquity, with a capacity of 10,000 spectators. There, ancient drama competitions were held and citizens gathered to make political decisions. The ancient theatre of Sicyon dates to the end of the 4th – beginning of the 3rd century BC, while it was rebuilt after 146 BC by the Romans. Since then, and after it was revealed by the American School of Classical Studies (in 1886-1898) and the Archaeological Society at Athens in the early 1950s, during excavations headed by Anastasios Orlandos, and then in 1984 under the direction of Kalliope Krystalli-Votsi, parts of it were restored in the years 2006 and 2007.  As of yesterday, the monument enters a new period of excavations and restoration works, within a framework of a project aiming at the protection and enhancement of its original identity. The Central Archaeological Council gave the green light to the plan of necessary works. …

USA – Port Jervis - Archaeological discoveries around the ailing Neversink Bridge will delay its replacement for a year, according to DPW director Vince Lopez. Unspectacular as the artifacts might be, they could portend further finds, according to Peter Osborne, author and former executive director of the Minisink Valley Historical Society. Because the bridge is near the convergence of two rivers, the Minisink and the Delaware, the area would have appealed to Native Americans, he said. At the Shohola Bridge site, he said, square holes were dug at six-inch intervals and mapped. The dug-up material is put through a screen. "It was a big, deep excavation. They had to use a ladder and pump fresh air into the hole. It took two excavation seasons to complete. Finally they did get down to sterile soil. What they found was continuous summer occupations by Native Americans for centuries. At the Port Jervis bridge site, Osborne said the top layers are likely to contain flood wash and railroad fill used to build up the riverbank. The riverbank has also been disturbed by previous bridges, whose abutments are still there. "What they found could be wash from upstream or an overnight campsite," Osborne said. "But deeper they may find other layers. If what they found is just from a campsite, it's not a problem. But if it's a burial ground, it could get sticky. You never know what you'll find until you hit sterile soil. A cultural site won't stop the bridge, though."

USA – Burlington - An Egyptian company planning to invest $1.4 billion to build a fertilizer plant in southeastern Iowa may have to pay for archaeological digging at the site because Native American artifacts were found there, the state archaeologist said Wednesday. Artifacts such as pottery, stone tools and spear points that are likely between 1,000 and 1,600 years old have been found in clusters on the 300-acre site north of Burlington. No human or animal bones have been found on the site, which had not been studied by archaeologists previously. It's still unclear whether researchers will be able to trace artifacts back to a specific tribe. 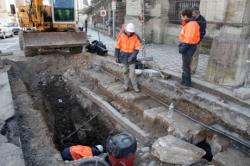