Aizanoi - A stunning statue Heracles, the Greek demigod, has just been unearthed in the Ancient Greek city of Aizanoi. The statue was found during the excavations being carried out in Penkalas Stream in the Ancient Greek city of Aizanoi, in what is now the Çavdarhisar district of the western province of Kütahya in Turkey. The statue is compatible with the “resting Hercules” statue typology. Although the head part was not preserved, we can easily understand that it is Heracles, based on the lion’s skin on it. Heracles, who is known in the West as Hercules, was frequently depicted as wearing a lion’s pelt after he slayed the Nemean Lion, one of his Great Labors. The headless statue of Hercules was discovered after the heads of the statues of Aphrodite, the goddess of love and beauty, and Dionysus, the god of wine, had been unearthed just two months ago, in October.

Chachabamba - In a new study published in the Journal of Archaeological Science, the team applied Light Detection and Ranging (LiDAR) technology using drones above the forest canopy. The study focused on the Inca complex of Chachabamba, a ceremonial centre associated with water that includes several water-related shrines and baths. By analysing the LiDAR data, 12 small structures erected on a circular and rectangular plan was revealed on the outskirts of the complex. The researchers suggest that they were the dwellings inhabited by the individuals that operated Chachabamba, although the structures are less ornate in the construction. According to Dominika Sieczkowska from the Andean Research Centre of the University of Warsaw: “There are indications that it was mainly women who looked after the complex. as suggested by objects discovered during previous excavations by a Polish-Peruvian team”. LiDar results also revealed previously unknown canals that supplied Chachabamba with water from the nearby Urubamba River via a system of partially underground blocks of stone. 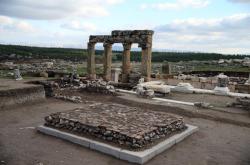 Blaundus - An altar site for the Greek goddess Demeter was unearthed during the ongoing excavations in the ancient city of Blaundus. The altar site was discovered in the courtyard of the temple of the goddess Demeter, which symbolizes agriculture, grain and harvest in mythology. "It has at least two steps, measuring approximately 5 meters by 4 meters (16.4 feet by 13.1 feet)," Can said. "We do not have much data on its superstructure." "Thanks to its foundations, we are able to deduce its plan. Again during the work, a piece of an altar table, which we think was located on this altar, was found," he added. Altars, Can said, are one of the structures that people who come to the site for worshipping have direct contact with, adding that people who come here do not enter the temple but the courtyard. Utah -  An Air Force team conducting an archaeological inventory in the west Utah desert has emerged with a discovery poised to completely reframe experts’ understanding of human tobacco use in North America. The groundbreaking find – 12,300-year-old tobacco seeds located in an ancient hearth on the Utah Test and Training Range – suggests tobacco’s cultural roots date back nearly 9,000 years earlier than previously thought.. An interesting small black stain on the ground next to a spear point, stone tools and burned bird bones encouraged the team to dig a little deeper, said Jaynie Hirschi, the Air Force Civil Engineer Center cultural resources subject matter specialist and person who secured the funding and support for the contract team that uncovered the seeds. Tests indicated the stain was charcoal leading experts to suspect the area was once a firepit in an open-air camp used by highly mobile Native American hunter-gathers around the end of the Ice Age.The archaeologists called the artifact-rich area where the tobacco seeds were eventually found the Wishbone Site, a name selected because the area was covered with bird bones. “We don’t know exactly how people at the Wishbone Site used the tobacco, but we assume they may have chewed or smoked it by the fireside,” Hirschi said. “This discovery can help archaeologists understand influences behind the use and subsequent domestication of tobacco, as well as how tobacco became such an important plant to Native American peoples throughout the Americas.”

Upton - An Iron Age settlement dating from around 2,250 years ago has been uncovered on the site of a new roundabout. The discovery was made during the planning phase of the improvements being made by Worcestershire County Council to tackle congestion at Upton A38 roundabout works. The site was first spotted on aerial photos and an initial investigation to find out more was carried out in late 2020. It revealed pottery which indicated that the site was a Middle Iron Age settlement, with an unusually large ditched enclosure at its heart. As a result of the find, full excavation was carried out in August and September 2021. Robin Jackson, Worcestershire Archaeology Team Manager, said: “The excavation revealed that the ditch defining the enclosure was exceptionally large, with a gap on the east side providing an entrance and large posts set to either side, indicative of a substantial gateway. We also discovered a waterhole, a small enclosure and field boundaries.“Pottery confirmed that the site dated to the Middle Iron Age, indicating that it had been occupied sometime between 300 and 100 BC. 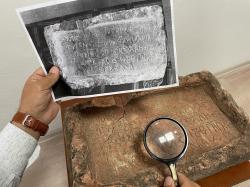 Giresun - An inscription dating back to the 14th century was found on Giresun Island, which lies 1.2 kilometers (0.7 miles) from the Turkish province of Giresun on the southeastern coast of the Black Sea. Noting that the inscription was found on the floor of the tower structure on the island, the academician continued: “The artifact belongs to the period of Alexios III Megas Komnenos, the emperor of Trebizond. The inscription states that the structures and walls on the island were commissioned by the venerable Maria, the wife of Pinkernes Kyriakos, the son of Giresun Governor Roustam. The name of Roustam in the inscription also gives us clues about the strategic marriages between the Turkmen beys in the region and the Komnenos dynasty." The inscription was made of terracotta, measures 30 by 50 centimeters (11 inches to 19 inches) and was written with goose feathers. Explaining that the inscription was translated by an academic from Russia, Iltar said: "The inscription provides us with several pieces of information and perspectives. For example, the title of 'pinkernes' means the cup bearer of the emperor of Trebizond. It is actually a high court position in terms of diplomacy, and a pinkernes should be considered one of the closest people to the emperor. Therefore, it is understood that the governor of Giresun at the time was very close to the emperor of Trebizond.” “The importance of the inscription increases even more as it reveals the relations in the region in the past and it is a unique work written in a regional alphabet of the Empire of Trebizond.” Iltar added that archaeological excavations will continue on the island in 2022 as well.