Didcot - Archaeologists discovered hunter-gatherers lived on the site of the Great Western Park development in Didcot, Oxfordshire, 9,000 years ago. Among other discoveries made by archaeologists during 2010-13 excavations were a rare and complete neolithic bowl dating from about 3,600 BC, a Bronze Age burial mound, 60 Iron Age roundhouses and up to 50 burials. A Roman farmstead was also discovered. Timeline of finds at the site : Mesolithic - 10,000 to 4,000 BC: Flint implements from hunter-gatherers - Neolithic - 4,000 to 2,000 BC: A ceramic bowl - Bronze Age - 2,000 to 800 BC: A pond barrow burial mound used for mortuary ceremonies and three roundhouses within a ditched enclosure - Iron Age - 800 BC to 43 AD: A large settlement with up to 60 roundhouses, animal enclosures, trackway and grain storage pits also used for human burials - Roman - 43 to 410 AD: A hoard of 400 coins, a Roman villa with bathhouse, human burials and corn drying ovens.

Nailsea - Ambitious plans to turn the former glassworks in Nailsea into a World Heritage Site have been whole-heartedly backed by councillors.The authority is planning to bury the archaeology on the site, which sits at the end of the town’s High Street, but put up information boards with details about the remains underneath and turn the area into a public open space. The scheme will protect the archaeology from damage and enable it to be unearthed in the future when there is better technology to do it. If successful in gaining the status from UNESCO, the glassworks would be listed alongside other World Heritage Sites. 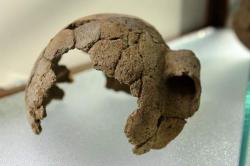 Kellytown - This is an important Native American archaeological site listed by Historic Nashville Inc. as one of the nine most-endangered historic sites in Davidson County and by the Tennessee Preservation Trust as one of the 10 most-endangered historic sites in all of Tennessee. What makes this vacant field so historically important? In 1997, the Tennessee Department of Transportation determined there was a compelling need for a northbound turning lane on Hillsboro Pike. Before any work could begin, TDOT archaeologists were required to conduct an assessment, because there had been reports of possible prehistoric human graves. Between February and July 1999, Gary Barker, a TDOT archaeologist, carried out recovery field work that yielded a treasure trove of artifacts. In the 30-foot proposed right of way, he found the remains of 10 Mississippian Period structures. He also discovered the remains of two palisade walls with bastions, five child burials and such diverse objects as earrings, frog-effigy bowls, trowels and parts of houses with daub walls. Archaeologists concluded that the whole area was a significant, almost totally intact late Mississippian village dating from A.D. 1250 to 1450.