Gaza - Ancient mosaic floors were found near the Bureij refugee camp in the central Gaza Strip. A statement by the ministry published on Saturday revealed that preliminary archaeological work at the site had uncovered mosaic floors, depictions of animals and social life dating back to the Byzantine era, another set of flooring with geometric shapes and additional architectural monuments and remains of ancient walls. Elter dated the floors to somewhere between the 5th and 7th centuries but added that proper excavations would be needed to determine the exact period and what its purpose was

Palmahim - An intact ancient burial cave – a rarity in and of itself – has been discovered on the southern Israeli coast, the Israel Antiquities Authority announced Sunday. A tractor moved a rock during construction for a new park by Kibbutz Palmahim and thusly Dror Czitron, an inspector for the Nature and Parks Authority, became the first to gaze on the grave for over 3,300 years. Literally, the first: the grave had not been robbed, confirms Eli Yannai, an expert on the Bronze Age at the IAA. However, the second may have been the first robber after all these centuries: there are indications that after the cave’s discovery, somebody did go in, mucked about and stole some items, though leaving most, the IAA says. It is investigating with vigor, it adds. Anyway, among the grave goods the latter-day thief left behind, meant to serve the deceased in the afterlife, archaeologists found intact pottery and bronze vessels, exactly as they had been put into the tomb in the 13th century B.C.E.: amphorae and bowls of various types and forms, cooking vessels and oil lamps. They also found tiny vessels that had held small amounts of precious substances, which apparently hailed from Tyre, Sidon and other ports in Lebanon. . The period is Late Bronze Age – exactly the time of the notorious pharaoh, Ramesses II ... The cave provides a full picture of burial traditions in the Late Bronze Age.” Ramesses II is credited with expanding ancient Egypt’s sway as far as modern Syria to the northeast and Sudan to the south. In other words, the burial cave dates to a time when ancient Egypt ruled the land that is today Israel. The burial chamber had been carved into the bedrock in the form of a square, with a pillar supporting its ceiling. In contrast to (slightly earlier) burials found in the vicinity of Israel’s southern coast, it seems to have served a family or clan, Yannai says. Other graves, albeit from the 14th century B.C.E., not the 13th, each served to inter one body. However, not much more about the bodies can be said: in contrast to the grave site itself, their preservation is poor, precluding the possibility of DNA extraction and analysis.

Tauranga - A pounamu toki unearthed from a building site in Tauranga's CBD may be more than 500 years old, archaeological investigations have found.The greenstone tool, also known as an adze, has been described as a "very significant taonga". It was found last month near The Strand, between Hamilton and Harington Sts. Because the CBD and particularly The Strand was the location of early Māori settlement and cultivation, we anticipated finding evidence of this activity. "However, the style of the adze suggests it is very old – probably pre AD1500. It is a very significant taonga." He said local hapū Ngāi Tamarawaho settled on the Te Papa Peninsular at least 700 years ago. Early European commercial development began in The Strand area in the early 1860s.

Ponza - During the Roman Period, Ponza was a Roman port and colony which was constructed to control the central Tyrrhenian Sea. The island also became a place of exile for important Roman figures, such as Nero Caesar (the eldest brother of Caligula), along with Agrippina the Younger (mother of Nero) and Julia Livilla. The Romans built a large villa complex on the island, known today as the villa of Puna della Madonna, with some sources suggesting that the villa was built for Augustus Caesar as an Imperial resort. Between the end of the Republican age and the first decades of the Empire, a series of rock cut caves and pools called the Grotte di Pilato was constructed to the west of the villa. These served as ornate fish farms to ensure the Roman elite had a secure supply of mullet and scarlet, moray eels and lobsters. As part of a study to document the underwater archaeology, the divers found a series of architectural slabs near the Grotte di Pilato, showing a relief decoration that depicts the so-called “flower woman”. This decorative motif is datable to between the 2nd and 1st century BC, with comparable designs being found throughout Lazio, Campania and in Southern Etruria. The team suggests that the slabs originally came from the villa of Puna della Madonna and found their way into the sea a short distance away due to erosion or other factors. This gives new insights into dating the period from which the villa complex was constructed, likely predating the previously accepted Augustan age.

Zernaki Tepe - Four inscriptions written in Aramaic were discovered in the ancient city with a grid plan, located on an area of approximately 270 hectares in Erciş district of Van province in eastern Turkey. The inscriptions are expected to shed light on the history of the ancient city. On Zernaki Tepe, in the Yukarı Işıklı neighborhood of Erciş District, excavations are being conducted with the approval of the Ministry of Culture and Tourism in the ruins of the grid-planned historical city, which attracts attention with its approximate 2.5 km length and 1.5 km width. During the excavations carried out under Van Museum Director Erol Uslu, 4 inscriptions were found, which are considered to belong to the Parthian Empire. They seem to be inscriptions of the Parthian Empire period, but their analysis will tell us much clearer things. It will enable us to give a clear date with carbon analysis. Aramaic inscriptions are very important for Anatolian archeology. For the first time, Aramaic inscriptions were found on an architectural wall in the Eastern Anatolia Region. 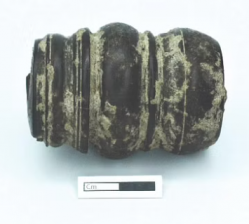 Keeladi - The excavations at Keeladi, a pre-Sangam (Iron Age) settlement, which commenced on February 12 this year, were carried out in nine quadrants, and the recent discovery of the ivory bead has turned out to be a surprise. The finest antique was unearthed from another quadrant, R. Sivanandam, Director of Archaeology, said on Sunday. This unique specimen of bead made out of ivory was found in the quadrant XM13/4 at the depth of 164 cm. “It is relatively large in size for a bead. The object is cylindrical in shape with multiple segmented spirals observed and a hole is found running longitudinally which is well proportioned,” he said. Two bigger spiral segments, which are bulged, and three smaller spirals were observed in total on the lateral side of the object. The object measured 5.6 x 4.0 cm with a centre hole measured 1.3 cm in diameter. Both the ends of the object are flat. Thousands of antiquities, including a terracotta human head figurine, an ivory dice,etc, found at Keeladi gave rational evidence as to where the ancient clan settled down in the area, which once was a fascinating picture of an urban centre, the Director said. 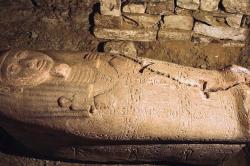 Saqqara - The sarcophagus of a senior royal official dating back 3,200 years was unveiled at the Saqqara archaeological site south of Cairo, authorities said Monday. A team of Egyptian archaeologists from Cairo University found the red granite sarcophagus of Ptah-em-uya, "a high-ranking official" under Rameses II, who ruled Egypt in the 13th century B.C., the antiquities ministry said. The noble was "royal secretary, chief overseer of cattle, head of the treasury of the Ramasseum," Rameses' funerary temple in the Theban necropolis at Luxor, said Mostafa Waziri, head of Egypt's Supreme Council of Antiquities. The official was also "responsible for the divine offerings to all the gods of Upper and Lower Egypt," Waziri added. The tomb of Ptah-em-uya was found last year. 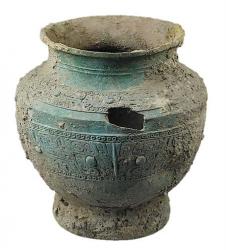 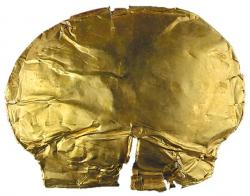 Zhengzhou -  In a news conference with the National Cultural Heritage Administration in Beijing on Friday, a Shang Dynasty graveyard of social elites unearthed from Shuyuan Street of Zhengzhou was unveiled to the public. Discovered accidentally during urban construction, the site was scrutinized by researchers of Zhengzhou Municipal Research Institute of Cultural Relics and Archaeology from May to August. According to Huang Fucheng, a leading archaeologist on the site, 25 tombs, within an area of 10,000 square meters, remain intact and three of them contain bronzeware burial items. Unlike contemporaneous discoveries in West Asia, where the bronzeware unearthed are statues or items considered to have been for daily use, Chinese bronzeware of the time was used in rituals to indicate people's high social status. "The findings also show that this area was well-designed, governed and organized," Huang says. "The exceptional identities of the occupants of the tombs will be further revealed by other unearthed artifacts."As well as bronze ritual items and weapons, 11 jade items, 123 cowries and decorations made of turquoise were also unearthed. Nonetheless, the biggest surprise among the findings is perhaps five gold artifacts, some of which are believed to have once covered the faces of those interred there. However, Huang says the specific use of these gold artifacts is still a matter of speculation. For an early stage Chinese civilization, the use of gold artifacts was exotic. Chen Xingcan, director of the Institute of Archaeology with the Chinese Academy of Social Sciences, says it was more common to use gold in burials in the West. It also reminds the public of the discoveries of gold masks at the Sanxingdui site in Sichuan province, dating back 3,200 to 3,000 years. "The findings may also show a grand picture of cultural communication across the Eurasian grassland," Chen says. "Comparative studies are required to get more clues so that we can develop a much wider lens through which to view the Shang Dynasty." Carbon dating shows the graveyard is about 3,400 years old, around the middle period of the Shang Dynasty, earlier than the Yinxu Ruins in Anyang,