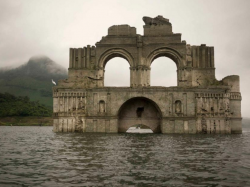 Nezahualcoyotl - The remnants of a 400-year-old Spanish colonial church have emerged from the depths of the Nezahualcoyotl reservoir in Chiapas, Mexico, after a drought caused the water level to drop by 82 feet (25 meters).  The church, known as the Temple of Santiago or Temple of Quechula was originally lost to the waters of the reservoir in 1966 when the dam was finished on the Grijalva River. Tourists are now flocking to the site to catch a glimpse of the Temple before it disappears beneath the water once again.The church measures 183 feet long (61 meters) and 42 feet (14 meters) wide, while the bell tower reaches 48 feet (16 meters) above the ground. The Temple of Quechula was first built in the mid-1600s by a group of monks headed by Friar Bartolome de la Casas. The Dominican friars also constructed a town around the church, which they called Quechala and Friar Bartolome made himself Bishop. Mexico News Daily reports that the region was inhabited by the Zoque people, predecessors of the Olmec.  In 1494, they were invaded and defeated by the Aztecs before the Spanish moved into Zoque lands in 1523. Under Spanish rule, their population was decimated by disease and the toils of hard labor, and their land was parcelled out among the settlers. Friar Bartolome initially supported the colonization and subjugation of the Zoque, but later took an opposing view and went on to write about the horrors of colonization. Bartolome had high hopes for the town of Quechala, expecting it to one day become a great city. However, a plague hit the town in 1773, forcing the inhabitants to flee. The town and the church were left abandoned.
http://www.ancient-origins.net/news-history-archaeology/stunning-16th-century-church-emerges-mexican-reservoir-after-drought-004243#ixzz3p7DAo7zT
VIDEO = https://fr.news.yahoo.com/video/mexique-eau-b%C3%A9nite-114900412.html?vp=1 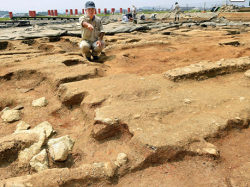 Kashihara - -Vestiges of stairs uncovered near the foundations of a grand building where emperors 1,300 years ago performed special rituals are being hailed as a significant discovery. Researchers said the stairs confirm the long-presumed design of the Daigokuden hall, a key structure in the sprawling Fujiwarakyu palace complex in the nation's first full-fledged capital. The discovery was made on the south side of the Daigokuden hall, according to the Nara National Research Institute for Cultural Properties. The ruins, designated as a special national historic site, and the surrounding area constituted Fujiwara-kyo, the nation’s capital from 694 and 710. It was used by three emperors. “The discovery to a great extent backs up our longtime speculation over the scale of the Daigokuden hall,” said Masashi Kinoshita, professor emeritus of archaeology at Tokyo Gakugei University. “It is a significant find that could provide us with a detailed picture of the center of politics of the nation that was just formed.” The stairs were located 5 meters from the center of the south face of the supporting platform of the Daigokuden hall. Most of the carved tuff stones are gone, except for the parts that formed the base. Archaeologists believe they formed a stairway measuring 5.2 meters from east to west and more than 3 meters from north to south. They said the chances are high that two additional stairways--east and west--of similar construction existed side since tuff stones were also found 10 meters to the east from the central areas of the south side. Previous studies suggest the Daigokuden hall was an imposing structure measuring about 45 meters from east to west and 20 meters from north to south.