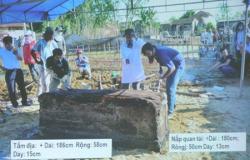 An Nhon  - The initial analysis of an ancient tomb excavated in An Nhon District in the central coastal province of Binh Dinh has been made known. According to archaeologists, the tomb contained a mummified man aged from 67 to 70 years old. He was believed to be Vietnamese based on the characteristics of his nasal cavity and orbit. Dr Nguyen Lan Cuong, head of the excavating team, told Viet Nam News, that the Viet Nam Institute of Archaeology decided to excavate and research this tomb as it was located in a residential area which had been reconstructed. "This area had been dug up by locals for building houses, so it was harder to study the mummy because water had leaked into the tomb," he said. "We hope we can find out more about the embalming skills and funeral processes by studying this newly-found mummy." The ancient tomb was dated back to the 19th century. The locals discovered it on October 12 when they were constructing roads for a resettlement plan.

CHINE - Hualongdong - Archeologists have found an “uncommonly well-preserved” fossilized skull of Homo erectus in east China, providing more valuable material in the study of the evolution and distribution of early man. The fossil is the latest discovery from the Hualongdong archeological site in Dongzhi County, Anhui Province, which the Institute of Vertebrate Paleontology and Paleoanthropology has been combing through since summer 2006. This is proving to be another important site after findings were made in Zhoukoudian, where Peking Man, a type of Homo erectus, lived, Lantian in northwest China’s Shaanxi Province, Anhui’s Hexian County, and Nanjing in east China’s Jiangsu Province, said lead researcher Liu Wu. The skull at the center of this discovery, named Dongzhi Man, was found along with an assortment of stone implements, other human teeth and bone fragments, as well as more than 6,000 bone fossils belonging to vertebrate animals including stegodon, an early relative of the elephant, giant tapir and giant pandas. “All of these indicate the site is exactly where the Dongzhi men lived as we found the bones of the animals were broken in a quite unnatural way. To put it more precisely, they were cut or chopped with tools into small pieces, meaning the animals were eaten or used as sacrifices,” said Liu. The skull was discovered on October 11 and partly encased in earth. The face can be clearly made out, including the complete eye socket, a large part of nasal bone and cheekbones. “Discovering a well-preserved ancient human skull fossil is a dream come true for a paleoanthropologist, so our whole team was so happily surprised,” said Liu. “A skull carries much more information than any other human bone. With it, it’s easier for us to restore the look of the human being and ultimately determine its origin,” he said. The skull is between 150,000 and 412,000 or more years old, Liu said, adding that further analysis will be done to determine its exact age. Previous homo erectus skulls discovered in China since 1926 are either deformed or “with no face, but only cranium,” explained Liu. Besides the skull, the scientists found bone fragments belong to at least four individuals, including a child. “Together with the animal bone fossils and the stone implements, we assume the site was the home for a relatively mature human community,” Liu said. Before the latest digs, archeologists had already found a fossilized human tooth, and human and mammal bone fragments at Hualongdong. 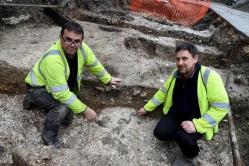 Dorcester - Archaeological excavations at a building site in Dorchester have uncovered remnants of the main Roman road through the town. Experts have been digging at Bennett’s Court car park off Colliton Street. Mike Trevarthen, Peter Bellamy and their team from Terrain Archaeology have been working at the site for around three weeks and have discovered some fascinating traces of the town’s rich history dating back to its time as the Roman town of Durnovaria. Mr Trevarthen said: “We have dug up the edges of what appears to be the main north to south street within the Roman town. “We have got part of the road make up and several phases of road enlargement. “We have also got the roadside drainage ditches.” Mr Bellamy added: “The road itself would have been almost the first thing they laid out in the Roman town.” He added that sadly there were no traces left of the road surface but it could still be clearly identified. While any traces of houses alongside the road appear to have disappeared, the dig has also uncovered Roman pottery and pins as well as a number of pits that may date back to Medieval times as well as the 18th and 19th centuries.