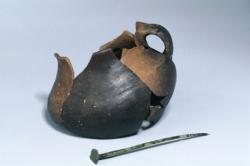 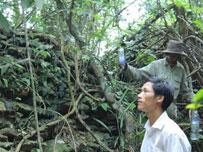 But Mountain Pass - Archaeologists in the central province of Ha Tinh said  they have discovered the remains of an ancient citadel dating back more than 1,600 years.  The 1km-long section of the citadel, built of stones, was found at the top of But Mountain Pass in Ky Anh District. The archaeologists said it the section was part of a 30km-long citadel built between 345 and 375 A.D. to protect the country from foreign forces. The citadel, which leaned on a mountain range and ran through three villages, was made of stones and earth, they said. A local official said the citadel used to be covered by trees until locals discovered and took stones from the citadel to build a dike several years ago. This practice was stopped by local authorities later. 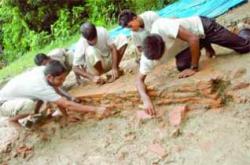 Bikrampur - Fund crisis would force the expert team to abandon excavation activities at the ancient archaeological site at Bikrampur in Munshiganj, members of the excavation team said. The excavation team has decided to stop their work on the project by June 30 due to fund shortage and high price of land in the area, said the project’s assistant director, Morshed Raihan. The team, however, ended its operation with successfully digging out a portion of regular brick structure and some broken stepped basalt [a kind of black stone]. Mostafizur Rahman said the bricks recovered could be of pre-medieval period. He said Bikrampur was the capital of four pre-medieval and medieval period dynasties — Chandra, Barma, Sen and Dev. ‘Though historians think the ancient capital was destroyed and washed away by the rivers Padma and Dhaleshwary, there is a possibility of finding its ruins under the earth,’ he said, adding that they were trying to unearth the facts of the glorious history of Bengal. ‘We have carried out excavations at Rampal and Bazrajogini unions under Sadar upazila in Munshiganj and have dug nine trenches at villages Sukhabaspur, Raghurampur, Bazrajogini, Guhapara and Khanka,’ he said while talking to reporters at a briefing at Munshiganj Youth Development Centre last Friday. The excavation team also took the reporters to the sites where they dug the trenches and showed their findings. The Bazrajogini trench measuring 4 metre deep, near Dewanbari, shows three layers of bricks and stones that could be sings of human habitation in the area in three different periods. A black basalt stone, measuring about 1x0.5x0.2 metres, was also found by a pond near this trench. ‘The age of the stones and pottery shreds could be confirmed through carbon-14 dating,’ said Morshed Raihan. He also said, ‘While digging, sometimes we felt like hopeless but later we got back out enthusiasm. We found a layer of a slab of concrete-like substances after digging 4 metres deep at Bazrajogini-3 trench. The students of Jahangirnagar University were with us in that sweating task.’ The Raghurampur-2 trench showed part of a T-shaped brick-made wall, 5-metre long and 1.45 metre wide. Clay was used as mortar between bricks, he said. The excavation project assistant director, Shamima Akhter, said their next task would be to categorise the artefacts they found in this year’s dig and about 79 idols that were in different museums across the country. ‘We are also collecting the pottery shreds and burnt clay images that the local people found during digging for household purposes earlier,’ she said. 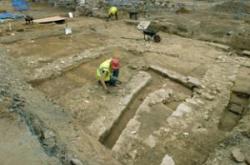 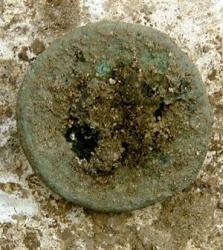 York - What did the Romans ever do for York?  Well, they certainly built some tremendous public baths – with hot and cold water – and archaeologists have now uncovered bathhouse foundations on the site of City of York Council’s new headquarters. Three phases of buildings, dating from the late 2nd to early 3rd Century AD, have been found in good condition on land just inside the City Walls where York’s first railway station was built in 1840. “In particular, one of these buildings has a curved or ‘apsidal’ end which we believe may be part of the caldarium or hot plunge,” said Nick Pearson, director of On Site Archaeology, which is carrying out the dig. He said Roman coins and pottery, and fragments of a life size Roman pot, had also been found 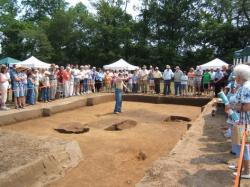 Berry - Burnt corn cobs are what archaeologists, students and volunteers have found at the Berry site as they continue to unearth what is possibly the earliest European settlement in the interior United States. In addition to small pits with corn cobs, field school workers at the site found two large trash pits. Students and volunteers are also working to uncover the corners of two burnt buildings. The trash pits are located between the two buildings. The Berry archaeological site dates to the 15th and 16th centuries and archaeologists believe it is the location of the Catawba Indian town of Joara. Spanish explorer Juan Pardo built Fort San Juan in 1567 by Joara and renamed the native settlement Quenca.

- ROYAUME UNI – Burrough Hill - An ancient Leicestershire hillfort will reveal some of its historic secrets over the next month, as archaeologists from the University of Leicester welcome the public to visit the second season of major excavation of the site. Situated on the Jurassic scarp with commanding views of the surrounding countryside, Burrough Hill near Melton Mowbray is one of the most striking and frequently visited prehistoric monuments in central Britain. Despite the site’s importance, relatively little is known about its ancient past. Last year a team from the University of Leicester began a five-year survey and excavation of the site. Trenches dug within the fort last summer revealed part of its stone defences, along with a cobbled road, a massive timber gateway and a ‘guard’ chamber built into the entrance rampart. This room remarkably still had surviving Iron Age floors, complete with its hearths an incredibly rare find. The most surprising discovery so far is evidence of a further large Iron Age settlement just outside the hillfort that was discovered by geophysical survey, suggesting that the hillfort community may have been even larger than thought. This year the team is revisiting the massive eastern entrance to expose the remainder of the chamber and reveal clues as to what it was used for.  Another area will target several roundhouses in the settlement outside in order to find out when and why so many people lived here.  The excavations will take place between 13th June and 15th July and will aim to add to results from a successful first season of excavation in 2010.