Jerusalem - Shimon Gibson marvels at a depth of irony that’s borderline mythological: While digging up Jerusalem’s past, he’s also digging up his own. The UNC Charlotte adjunct professor of archaeology has been co-directing an annual dig on Jerusalem’s Mount Zion that returns him to the historic, mysterious region he first explored as an 8-year-old. This summer his crew has continued to investigate a finished bathroom it discovered in 2013, on the lower levels of what it believes to be an early Roman mansion. The team also found another complete vaulted room, again easing decades of concerns by archaeologists that remains from first-century Jerusalem were poorly preserved. “These remains are extraordinarily well preserved,” Gibson said, “such that not only do we have the complete basements of houses with their rooms intact, but also the first story of these houses are also very well preserved. This is truly amazing.” Reasons for the buildings’ condition are twofold, he said: Occupying Romans destroyed the Jerusalem of Jesus’ era in AD 70. The city was deserted for 65 years, until the Roman emperor Hadrian rebuilt a city on the ruins. “Then, in the Byzantine period (AD 330-1453), the buildings were filled in so the area could be flattened in order to build houses and structures on the top.” Because of the elaborate nature of objects found in these buildings and their proximity to an excavated mansion in the nearby Jewish Quarter, “we surmise that the houses either belong to aristocrats, or probably to well-to-do priestly families,” Gibson said. If this can be verified – ideally via an inscription or document – the find may provide details about the lives of those who ruled Jerusalem at the time of Jesus.

USA - Cook County - Archaeologists and field technicians are spot-checking more than a thousand acres of Cook County forest preserves this year to learn about the people who lived on the land thousands of years ago. The Chicago Tribune reports (http://trib.in/1Opb6Xg ) that researchers are digging for hand-fashioned arrow points and tools used by early inhabitants. The county's forest acreage offers an unusual opportunity to study the past. Other sites have been destroyed by development. Less than 20 percent of the forest preserve land has been surveyed by archaeologists over the years. Now the forest preserve district has contracted with the Illinois State Archaeological Survey, part of the Prairie Research Institute at the University of Illinois, to do a more rigorous study. 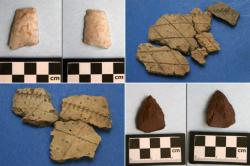 New York - A $2.9 million project to improve waterfront access in the Bronx unearthed a priceless find — more than 100 pieces of Native American artifacts dating back to 200 AD. Experts are calling the trove of ceramics, pottery, stone tools and other artifacts found in the southeastern section of Pelham Bay Park one of the most important archaeological finds in New York City history. Tests show the rare artifacts date back to between 200 AD and 1000 AD — centuries before European settlers made contact with Native Americans, she added.

ROYAUME UNI – Stockton - Archaeologists on Teesside say they have found evidence of medieval settlements in Stockton. Members of the Tees Archaeology group have been digging in Egglescliffe Village and have uncovered traces of buildings, pottery and animal bone. Gun flints from a later period have also been unearthed, archaeology officer Robin Daniels told BBC Tees. Royalist soldiers were based in the area during the 17th Century English Civil War. Gun flints were used to ignite and fire muskets
http://www.bbc.co.uk/news/uk-england-tees-33585714

EGYPTE - Queen Bernice port - The Polish Center for Mediterranean Archaeology excavated two Pharaonic-era paintings on the Red Sea according to the Antiquities Ministry, Mada Masr reported. One of the paintings dates back to Egypt’s Middle Kingdom (2134-1690 BC) and the second is from the Second Intermediate Period (1674-1549 BC). In partnership with the University of Warsaw, a team from the Polish Center for Mediterranean Archaeology uncovered the paintings at the Queen Bernice port on the Red Sea. Antiquities Minister Mandouh Al Damaty said in a news conference Sunday that the team had also successfully excavated a number of objects that go back to the Roman age and it had uncovered parts of the facade of the Bernice Temple. Founded by Ptolemy II, Bernice is an ancient port city located west of the Red Sea, approximately 800 kilometers south of the Suez Canal. Ptlomey II’s motive to create Bernice was to deploy a large number of expeditions to locate elephants to be used during wartime. The paintings were dug up as part of the remains of Bernice Temple and were discovered among objects from the Roman Era. This proves that the port remained active after Pharoanic era, Damaty said during the press conference. The Ministry of Antiquities have not disclosed any information on the conditions of the objects found as well as if or when they’ll be available for exhibitions and public view.

Keezhaiyur - The State Archaeology Department has recently taken up maintenance and upkeep of twin temples at Keezhaiyur on the Tiruchi-Ariyalur Highway. The village, though small, accommodates two temples – one on the north called Vadavayil Srikoil or Chozheecharam and the one on the south called Thenvayil Srikoil or Agatheeswararm. The temples were constructed by chieftains of Pazhuvettaraiyar – Kumaran Kandan and Kumaran Maravan of the 9{+t}{+h}century AD. According to sources of Tamil Nadu State Department of Archaeology, the temples were excellent examples of the early Chola architecture. “In fact, these temples had been constructed prior to the construction of the Big Temple in Thanjavur,” say the sources. The village has been popular as the capital of the Pazhuvettaraiyar. The State Archaeology Department has been taking special efforts for proper upkeep and maintenance of the temple which was built by the Avani Gandarvan. The temple accounts for a large number of inscriptions which are a storehouse of information of the hoary past. The temple has been the centre for promoting art and culture. “The temple has attached importance to music. This is evident from one of the idols on the Vimanam holding a musical instrument,” say the source.

Co Sligo - A number of significant historical artefacts have been recovered from the wrecks of a Spanish Armada off the coast of Co Sligo. The latest recoveries include six bronze cannons, one gun carriage wheel and a ship’s cauldron, along with a number of smaller items. Recovery efforts are currently focused around the wreck of a ship called the La Juliana, which was built in 1570. The ship - along with the La Lavia and Santa Maria de Vison - were wrecked at Streedagh on the 21st September 1588. More than 1,100 people died when the ships went down. The operation is focusing on the La Juliana amid fears of potential weather damage and illegal interference, after parts of the ship were exposed during recent storms.

COLOMBIE - Cartagena de Indias - Colombian archaeologists have discovered the remains of what could be an 18th-century merchant vessel sunk by Spanish naval commander Adm. Blas de Lezo in 1741 in an attempt to block an English invasion of the Caribbean port city of Cartagena de Indias, the researchers told EFE. The discovery consists of a cannon and several slabs of wood that form "a pattern indicating that all the wood and structures belonged to a single ship," the Universidad Externado de Colombia professor of archaeology and director of the Terra Firme Foundation, Carlos del Cairo, said. The newly discovered shipwreck was apparently one of four ships that Blas de Lezo, known for the many wounds he suffered in battle, sank in the Manzanillo channel during the siege of the city by English corsairs commanded by Adm. Edward Vernon. Adm. Blas de Lezo, as part of his strategy for defending the city, sank at least another six men-of-war in the channels of Bocachica and what today is known as Castillo Grande, so that the attackers' ships would be stranded on the sunken vessels when trying to invade the city. The shipwreck was found off Manzanillo island. 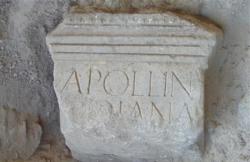 Novae - The archaeologists excavating the Ancient Roman city of Novae near the Bulgarian Danube town of Svishtov have discovered a pedestal with an inscription in Latin which is dedicated to ancient deities Apollo and Diana. The newly found inscription in Latin is the first instance of an inscription found in the Roman city ofNovae in which the names of Apollo and Diana appear together, says Assoc. Prof. Pavlina Vladkovafrom the Regional Museum of History in Bulgaria’s Veliko Tarnovo, who is one of the lead archaeologists of the excavations in Novae, as cited by the Trud daily. “The newly found Roman inscription on the pedestal is only partially preserved, and there is no information about thededicator, and their ethnicity and social status. The deep engraving of the Latin letters and their precise writing indicated that the monument dates to the 2nd century AD. The fragment also appears to have been used a second time forconstruction – in the wall of a building from the 4th century AD, which is located outside of the Roman military camp, near Novae’s western fortress gate,” explains Vladkova.