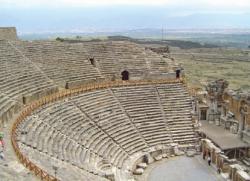 Hieropolis - Authorities have announced plans to begin restoration work on an 1,800-year-old stage at the ancient city of Hieropolis in the Aegean province of Denizli. The restoration is slated for completion in July 2012. [When complete,] the tunnels and entrances of the theater will become as they were when they were constructed. The first aim is to complete the first-story stage. After wall reinforcements, the bedplate, columns and reliefs will be handled and installed.” The construction of the stage was estimated to have begun in 60 A.D. and finished after 150 years. When a company won the tender initiated for the restoration works last year, it was announced that the stage would be the first ancient theater to be restored in Turkey. One of the three examples of ancient theaters in Anatolia, along with the theaters in the Aegean province of Aydın at Sultanhisar and the Mediterranean province of Antalya at Perge, Hieropolis’ ancient theater has a capacity for 12,000, situated close to the travertine pools of Pamukkale.

Tilantongo  -  The National Institute of Anthropology and History, or INAH, has published in Mexico a facsimile edition of the Codex Colombino, dating back to the 14th or early 15th century, to put it within reach of the public.The facsimile is complemented by research that sheds new light on the 11th-century Mixtec ruler Eight Deer Jaguar Claw, a central figure in this pictographic document, the only one of pre-Columbian origin preserved in Mexico, INAH said Friday in a communique. The Codex Colombino, made up of 24 pages - which placed end to end would be over 6 meters (20 feet) long - is kept at the National Library of Anthropology and History.The document chronicles the exploits of the ruler Eight Deer Jaguar Claw, who was born in 1063 A.D. in the town of Tilantongo in the Upper Mixtec area of what today is the southeastern state of Oaxaca, and who consolidated his power around 1101 A.D. Eight Deer Jaguar Claw has been identified as the architect and founder of the Tututepec Empire in the coastal Mixtec area that centuries later rivaled the Aztec Empire. 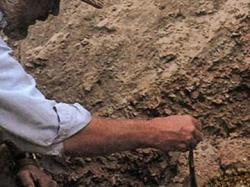 Chayrud - Azerbaijani archaeologists revealed an ancient settlement in Lerik district of Azerbaijan's south. The traces of the settlement were found in Chayrud village by a local resident as he was working in his farm. After studying the revealed samples of ceramic and metal, archaeologists defined that they are about three years of age. The Institute of Archaeology and Ethnography continues studies in Veri, Tuli, Jonikend, Stan, Mastail and other villages of Lerik. 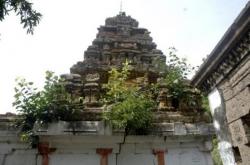 Kovalam - The Sri Kailasanathar Temple, tucked away in a quiet street branching off from the main road — hardly 300 metres from the seashore — dates back to the Eighth Century A.D., according to Archaeology Department sources. They say that there is proof in the form of inscriptions on the Aavudaiyar (Lingam) and on the surrounding walls to show that the temple was built centuries ago. Kovalam served as an important sea port for 600 years from the 10 th Century B.C. to 16 th Century B.C. It was during this period that the Kailasathanar Temple was built. There is proof in the form of inscriptions in the temple to show that the Lingam was installed in Eighth – Ninth Century. The Aavudiayar bars an inscription ‘Sri Satheruman Murthiper’. ‘Sat’ means a trade guild and ‘Satheruman’ refers to the Lord. This, along with other inscriptions engraved in the ‘Adishtanam’ (base) of the ‘Maha Mandapam (Inner Mandapam on the eastern side) were discovered by the State Department of Archaeology in 2000 during Epigraphical survey. the traders exported many items, including cotton and arecanut from Kovalam for which they levied tax. This revenue was gifted to the temple for worship and maintenance. Successive generations renovated, extended and modified the temple structure. This continued till the Vijayanagar Period (16th Century). Padmavathy A, who retired as a Senior Epigraphist in the Archaeology Department, and who had visited the temple during her tenure, says that the Aavudaiyar bears inscription in Palaeography Script that is very rare. “The inscription dates back to the Eighth Century A.D. and is proof that the Lingam was sculpted during that period.”  She says that the Sanctum Santorum and the Outer Mandapam were built in the 13th Century A.D. “In fact, an inscription dating to this period is found on the Dakshinamurthy idol. The inscription states the name of the merchant who installed the idol. There are also other stone sculptures and inscriptions belonging to the 16 th century in the temple,” she adds.  Besides the presiding deity, the temple has separate sannidhis for the Lord’s consort Kanaka Valli and Subramanya with his consorts Valli and Deivanai. A unique feature of the temple is the presence of thee Ganesa sannidhis — Kubera Ganapathi, Vijaya Ganapathi and Siva Sakthi Ganapathi.  The nearly 200 sq ft Mandapam on the northern side of the temple has deities of Lord Venkateswara flanked by Bhuma Devi and Surya, a huge Lingam, Kalikambal and Swarna Bhairavar. The pillars bear sculptures depicting scenes from the Ramayana. There is also one sculpture that shows Siva pushing Yama with his foot to save Markandeya. However, the temple gopuram, the walls of the sanctum sanctorum and the outer walls have developed cracks that show that the structure has withstood the ravages of time. The growth of weeds and plants on the gopuram, with their roots making their way inside the sanctum sanctorum through the roof is testimony to the neglect of the centuries-old place of worship and the threat to its very existence.

- VIET NAM – Lac Ba Be - Traces of prehistoric man have been found near Ba Be Lake, in the northern province of Bac Kan. Members of the Viet Nam Archaeological Institute and the Bac Kan Museum have been excavating the area for possible prehistoric remains since June. Numerous artefacts, dating from 20,000 BC to 10,000 BC, have been found in Tham Hau, Tham Coc Nghiu and Tham Mya villages in the Nang River valley. Trinh Nang Chung, from the Viet Nam Archaeology Institute, said Stone Age people inhabited the area for many thousands of years and were responsible for what has become known as the Hoa Binh culture (10,000 BC).

- ROYAUME UNI – Llanarthne – It was a mansion for the elite Middleton family in the early 17th century – but now it lies buried beneath the grounds of the National Botanic Garden of Wales. Not for much longer though. An archaeological dig by experts from Swansea and Trinity St David’s universities has begun. The Middletons were a Welsh family considered to be a major force in later Elizabethan times and beyond, and while it has been known for some time that their former residence was there, only now is it to be revealed. Project leader Professor David Austin, of Trinity St David, said: “We have known for some time that the Garden is home to a lost medieval mansion of significant historical importance. “Fragments of roof tile found on the site in the late 1990s confirm the presence of an elite dwelling place. Principal archaeological supervisor John Dollery said the key finds were those of building materials and what may be a lost garden from the 1640s.“We have found a lot of building material such as lime mortar and stone and also lots of nails, charcoal and a bit of brick,” said Mr Dollery. “A great deal of pottery has been uncovered dating from the late 1500s to late 1700s. “We have a rough estimate that the hall was built in around 1635, but there is a possibility that there could be earlier remains and structures on the site. The pottery certainly predates that.” He said rubble deposits that had been discovered were from the hall and, underneath that, walls and structure was expected to be found.