Kursi - Cohen said that due to the recent find, they were able to prove that the village which is known in the Talmud as Kursia, can be identified with the modern archaeological site of Kursi. Cohen said that the town likely remained Jewish until the Arab Conquest of Israel in the 7th century. Util know the leading theories believe that the area around the eastern section of the Kinneret was populated only with Pagan towns."In the world of archaeology, people believe that until you have facts in the ground, then a theory is unproven. So here we have proof that this area had Jewish inhabitants. Something which was refuted before. It was believed that this entire area was pagan. But moreover, it confirms passages from the Talmud that claim that this town was a Jewish town," said Cohen.  The find was a 1,600 hundred year old marble slab, that has a reference to the name of the Talmudic town, as well as a blessing with the word Amen at the end of it, thus leading archaeologists to believe that it was indeed a Jewish settlement. the find was a made on Tuesday during Hanukkah. 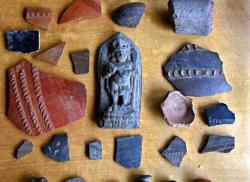 Vommili - A treasure trove of historical evidence of immense heritage value has been by found by archaeologists at the Vommili village of V. Madugula mandal in the district recently. The objects retrieved from a trial excavation on the surface include a standing image of the Vajrayana deity ‘Heruka’, a terracotta elephant head, conical mud bowls, thumb and finger print designs on pots, polished black ware, dull chocolate-coloured slipware and herringbone patterns. The site, located close to the hills at Vommili, was used for cultivation for a long time, causing damage to some of the historical evidence. The idol of ‘Heruka’ was found by the villagers and placed under a tree and was being worshipped. The discovery of some more earthen materials like potsherds and decoration pottery may have given rise to the suspicion that a treasure trove was lying buried under the ground. “We inspected the site on December 10. Trial excavations revealed rich historical materials. The retrieved objects indicate that the Buddhist site flourished between 3 century BC and 8 century AD. This is the first time that evidence of a Buddhist monastery of such an era has been discovered in Visakhapatnam district,” Assistant Director (Archaeology and Museums) K. Chitti Babu told The Hindu on Saturday. “Most of the Buddhist heritage sites found in the city and in Srikakulam, Vizianagaram and Visakhapatnam districts are located along the coast and had flourished between 3 century BC and 3 century AD. But this site is located in the hinterland, far from the coast, and it flourished for about a thousand years,” he said. A unique feature of the Buddhist heritage sites in north coastal Andhra Pradesh is that the objects found at the site indicate the presence of various architectural styles (south and north Indian styles as also styles from overseas) unlike in Amaravathi and other places, were only Andhra style architecture is found. 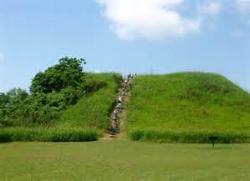 Winterville - One has only to travel to Greenville in the Mississippi Delta to see the remains of a civilization that thrived from about 1000 to 1450 A.D. The Winterville Mounds, named for a nearby community, is the site of a prehistoric ceremonial center built by a pre-historic civilization. The ceremonial center originally contained at least 23 mounds. Some of the mounds located outside the park boundaries have been leveled by highway construction and farming. Twelve of the site's largest mounds, including the 55-foot-high Temple Mound, are currently the focus of a long-range preservation plan being developed by the Mississippi Department of Archives and History and the University of Mississippi's Center for Archaeological Research. The Winterville mound group provides an example of the late prehistoric chiefdoms characteristic of the Mississippian Period culture. Unlike their Woodland predecessors, these societies were marked by centralized political control, an economy based on intensive agricultural production, and the emergence of an identifiable elite social stratum, many of whom resided in ceremonial and political centers marked by the building of groups of pyramidal mounds. The mounds that mark these centers were used as platforms for elite dwellings, temple structures, and other public buildings. Where the chronology of construction is well understood, such as the site of Moundville in Alabama, this construction often ensued at a rapid pace, with an apparently well conceived notion of site layout. Archaeological investigations at other Mississippian centers have documented the ritual, economic, and esoteric activities that occurred while they served as the central focus of complex chiefly polities. A similar range of cultural activities can be expected to have occurred at Winterville.The mounds, part of the Winterville society's religious system, were the site of sacred structures and ceremonies. Archaeological evidence indicates that the Winterville people lived away from the mound center on family farms in scattered settlement districts throughout the Yazoo-Mississippi River Delta basin. Only a few of the highest-ranking tribal officials lived at the mound center.