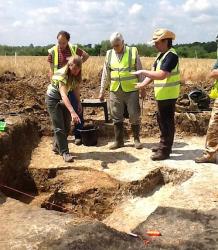 Bulmer - Stour Valley Community Archaeology will be participating in another excavation at Goldingham Hall, Bulmer, near Sudbury, taking place on Thursday to Sunday 28 - 31 May 2015. The aim of this dig is to find out new information regarding the size, shape, age and use of the structure near Trenches C and D where we have post-hole features and high-status, imported pottery and also to further examine features in both ends of Trench E. There is also some further work to be accomplished on the "subterranean" oven in Trench A. 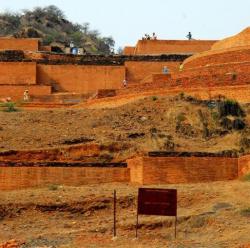 Chandavaram - The magnificent Buddhist stupa in this sleepy village, has been given a facelift by the State Government to woo national and international tourists in a big way. The stupa is the biggest in Andhra Pradesh. The remnants of the stupa overlooking the Gundalakamma river will not only floor the Buddhists but also nature lovers. It rivals the Sanchi stupa in grandeur. The ruins include a Maha Chaitya with a dome of 1.6 meters height and a drum of 60 cms wide, a three-winged vihara. The remote village has been a major Buddhist centre in the past attracting Buddhists from different parts of the country. Special size bricks of the size 52 x 26 x 7.5 cm were used then for building the marvellous religious structure which include a meditation hall, rest rooms and stairs from three sides. The events related to Buddha's life and teachings, including the great renunciation, Bodhi tree, throne, pillar of fire and Dharmachakra are found on the four sides of the stupa at Chandavaram, 70 km from Ongole. 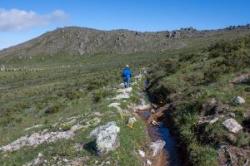 Lima -A revival of pre-Inca water technology in the mountains of the Andes is set to keep taps flowing in the drought-affected Peruvian capital, Lima. Grouting ancient canals, it turns out, is a far cheaper solution to the city's water crisis than building a new desalination plant. Lima is one of the world's largest desert cities and relies for water on rivers that flow out of the Andes. But those rivers diminish to a trickle during a long dry season, leaving the population of almost 9 million with intermittent water supplies. Now the city's water utility company, Sedapal, has decided to invest in conservation projects in the Andes to keep the rivers flowing and taps running. And researchers have discovered that the most cost-effective way is to revive a system of ancient stone canals, known locally as amunas, that were built in the Andes by the Wari culture between AD 500 and 1000, centuries before the rise of the Incas. The canals captured water from rivers in the mountains during the rainy season and took it to places where it could infiltrate rocks that fed year-round springs further down the mountains, so maintaining river flow during the dry season. The amunas fell into disrepair long ago and had been largely forgotten. In most places, their water now quickly returns to the rivers. But hydrologists such as Bert De Bièvre of Condesan, a Lima-based non-governmental organisation behind the project, say re-grouting the lined stretches of the canals with cement would allow them to resume their original purpose. 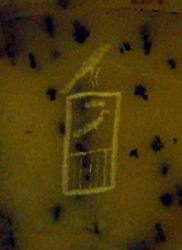 Quweissna- An excavation team from the Egypt Exploration Society, in collaboration with the Antiquities Ministry, discovered the tomb of King Khaba of the third dynasty at the Quweissna archaeological site. Antiquities Minister Mamdouh al-Damaty highlighted the importance of the excavation, as it is the first time an ancient tomb has been discovered in Quweissna, the location being better known for archaeological tombs that date back to the Roman era. “Discovering a tomb for this king is a new archaeological accomplishment as he is one of the kings we do not know a lot about. Much research and study will be necessary to reveal his age and unveil his history,” Damaty added. Discovering a tomb in the central Delta, according to Damaty, will allow researchers to understand the regional administration system of Egypt at that time.

Rome - Rome is getting old. Yesterday, in fact, it held a big party to celebrate its 2,768th birthday. Though celebrations were held this weekend, the city's official founding date is 21 April. Allegedly, on this date back in 753 BC, Romulus, fresh from killing his brother Remus in a dispute over the placing of their new city, chose a spot on the Palatine Hill, not far from the cave where the pair were brought up by a she-wolf. Obviously pleased with himself (and, apparently, his recent fraticide), he named the new city after himself. Archaeologists estimate that the area had actually been populated since about 1000 BC, but 753 BC symbolically and officially marks the beginning of the Rome we still see ruins of today. Since then, the city's had a fairly volatile trajectory: first a small Latin village, then capital of a giant Mediterranean empire, then a bit of a ghost town dominated by the Pope, before finally becoming capital once again of a reunited Italy in the 19th century.

CHINE - Jiangxi - The Great Shangqing Palace, a temple dedicated to a Chinese Taoist master, was excavated in east China's Jiangxi Province, said local sources Sunday evening. Zhang Daoling (34-156), who founded a sect of Taoism and was known as Celestial Master Zhang, is believed to have lived and practiced Taoism at Longhu Mountain in Jiangxi, where a temple was built during the Han Dynasty (202 B.C -220 A.D.) and renovated and expanded in the following centuries. "It was a very important Taoist site in history," said Xu Changqing, head of the Jiangxi provincial archaeological institute. The temple was destroyed in a fire in 1930. Excavation on the temple started last June. The ruins covered about 10,000 square meters (about one hectare), where pieces of pottery and porcelain as well as building components were unearthed, including some glazed tiles found in the temple's ancient paintings. "The items discovered suggest how the palace evolved from the Song Dynasty to the Qing," said Xin Lixian, a research fellow with the National Museum of China. He noted that only a small part of the palace was excavated. According to Xin, the palace's ruins were among the largest and best preserved in south China.;"It also provides scientific evidence for research on ancient Chinese royal architecture," he said. 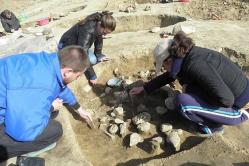 Mursalevo - A third child skeleton has been found in this 6th century BC Ancient Thracian ritual pit which is believed to have been the site of an Ancient Thracian child sacrifice. It is found at the site of a 8,000-year-old Early Neolithic city near Bulgaria’s Mursalevo.Inside the same Thracian ritual pit where the skeletons of the three sacrificed children have been discovered, the Bulgarian archaeologists have found several stones that are believed to have been used in the human sacrifice ritual.Some 20 such ritual pits in which the Ancient Thracians placed artifacts or food as sacrifice to their gods, or sacrificed animals or humans, have been found on top of the Early Neolithic city near Mursalevo.