TURQUIE –  Rhodiapolis - Rhodiapolis excavation leader and Akdeniz University archaeologist Dr. İsa Kızgut told that his team had uncovered what he believes to be a Lycian cemetery complex that dates to roughly 300 B.C.  The complex, explained Kızgut, was a series of tombs that surrounded a larger necropolis in ancient times. Today, although the necropolis and most of the tombs have been destroyed over the centuries, Kızgut says that the tombs they have so far uncovered will serve as key examples of the often elaborate style of tomb architecture found in Lycian Anatolia. Kızgut believes the tombs grew incrementally, expanding in width and height over multiple generations. “When another person was buried in the tomb, they were buried … on top [of other graves in] the tomb.” Kızgut said, explaining that the large two to three-story structures were often the result of such additions.  “The structures were made of brick and topped with arched roofs. We believe these characteristics are rooted in the cultural heritage of Pisidia,” Kızgut added, referring to a mountain region located north of Lycia in ancient times. 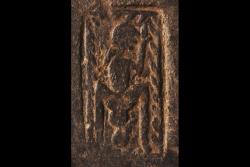 – Poggio Colla - An archaeological excavation at Poggio Colla, the site of a 2,700-year-old Etruscan settlement in Italy’s Mugello Valley, has turned up a surprising and unique find: two images of a woman giving birth to a child. Researchers from the Mugello Valley Archaeological Project, which oversees the Poggio Colla excavation site some 20 miles northeast of Florence, discovered the images on a small fragment from a ceramic vessel that is more than 2,600 years old. The images show the head and shoulders of a baby emerging from a mother represented with her knees raised and her face shown in profile, one arm raised, and a long ponytail running down her back. The identification of the scene was made by Dr. Phil Perkins, an authority on Etruscan bucchero and professor of archaeology at The Open University. “We were astounded to see this intimate scene; it must be the earliest representation of childbirth in western art,” said Dr. Perkins. “Etruscan women are usually represented feasting or participating in rituals, or they are goddesses. Now we have to solve the mystery of who she is and who her child is.”  “The birth scene is extraordinary, but what is also fascinating is what this image might mean on elite pottery at a sanctuary,” said Dr. Greg Warden, professor and associate dean for academic affairs at the Meadows School of the Arts at SMU and a director of the Mugello Valley Archaeological Project. “Might it have some connection to the cult, to the kind of worship that went on at the hilltop sanctuary of Poggio Colla?” The ceramic fragment is less than 1-3/4 x 1-1/4 inches (4 x 3 cm), from a vessel made of bucchero. Bucchero is a fine, black ceramic material, embellished with stamped and incised decorations, used to make eating and drinking vessels for Etruscan elites. Typically, stamped designs range from abstract geometric motifs to exotic and mythical animals. There are no known Greek or Roman representations of the moment of birth shown as clearly as the Poggio Colla example until more than 500 years later. The fragment dates to about 600 B.C.E. (Before the Common Era). Because the site at Poggio Colla has produced numerous votive deposits, scholars are certain that for some part of its history it was a sacred spot to a divinity or divinities. The abundance of weaving tools and a stunning deposit of gold jewelry discovered earlier have already suggested to some scholars that the patron divinity may have been female; the discovery of the childbirth scene, because of its uniqueness, adds another piece of evidence to the theory.

USA – Pierre - The U.S. Army Corps of Engineers recovered dozens of ancient bison skulls exposed by the receding Missouri River floodwater in South Dakota. The skulls, some of which are as much as 10,000 years old, were found on a sand bar near Pierre, the Rapid City (S.D.) Archaeologists from the Archaeological Research Center in Rapid City and the South Dakota School of Mines and Technology will travel to the site to search for more bones and fossils. "We're going to go out to the area where they were collected and see if we can identify other species that are relatively uncommon -- specifically Ice Age mammals, like ground sloth, camel [and] horse," said assistant state archaeologist Michael Fosha. It is unclear why all of the skulls washed up in one place, but it is possible the location was a natural gathering spot for bison or a village or hunting ground, Fosha said.

VUANATU –Uripiv -  Archeologists are excited about finding a second Lapita cemetery in Vanuatu. The Lapita people are believed to be the region’s first settlers, having arrived about 3,000 years ago. An Australian National University archeologist, Dr Stuart Bedford, has been studying Lapita sites in Vanuatu for over a decade, and says the find on Uripiv island near Malekula is significant.“Well this is the further discovery of another cemetery so hugely important. And interestingly slightly later, just a generation or two later so we are able to compare burial ritual and the health of the population several generations down the track so a truly wonderful find.”Dr Stuart Bedford.

TURQUIE – x  Hatay - Archaeological treasures, including a large mosaic, have been found during drilling at a construction site for a new hotel in the southern province of Hatay. The mosaic found during the drilling is 850 square meters and estimated to be the largest mosaic discovered in Turkey. An ancient glass artisan workshop, walls from the Hellenistic era and the largest mosaic have been found.
http://www.hurriyetdailynews.com/n.php?n=turkey8217s-largest-mosaic-discovered-on-the-med-2011-10-14