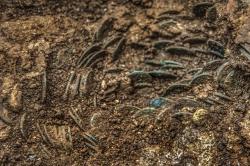 Ueken - A Swiss farmer has unearthed 4,000 bronze coins from the Roman period – one of the largest hoards ever excavated in Switzerland. Archaeologists say they date back to AD 295. The farmer noticed the green-tinged coins peeping out of a molehill in his cherry orchard in Ueken in canton Aargau. He alerted the local archaeological authorities, who launched a preliminary dig in September. “What we found within the first three days exceeded all expectations by far,” announced Aargau archaeologist Georg Matter on Thursday, noting that there have been very few such finds. The excellent condition of the coins suggests they were barely in circulation before being buried. By early November, the archaeology team had found 4,166 Roman coins within an area of just a few square metres. Some of them were stashed in cloth and leather bags. The valuable bronze coins contain about 5% silver and weigh some 15 kilogrammes altogether.Swiss numismatist Hugo Doppler has identified a number of emperors stamped onto the coins: Aurelian (270-275), Tacitus (275-276), Probus (276-282), Carus (283-285), Diocletian (284-305) and Maximian (286-305). The newest coins are from the year 294.“The owner must have deliberately chosen these coins in order to hoard them,” believes Doppler. “Their silver content would have guaranteed a certain value conservation in a time of economic uncertainty.” 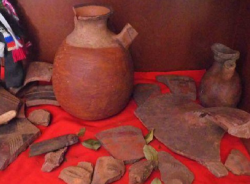 Ccorca - Cusco residents voluntarily turned in archaeological objects to local cultural authorities, after they had maintained them in their possession for an unknown period of time. Residents of Ccorca, Cusco, had been holding ceramic and stone fragments dating back to the Late Horizon period until they turned them in to the Office of Tourism and Culture of the Ccorca District Municipality. The residents came from different sectors of Ccorca and claimed they had collected the pieces themselves that date back to between 600-1000 AD. The contents include two ceramic bowls, 288 ceramic fragments and 4 stone artifacts. Among these objects are two pitchers with spheroidal shapes and features that correspond to the Late Horizon period (1476-1532 AD) and the Middle Horizon period (600-1000 AD) The ceramic fragments have been recognized as handles, edges and bases of domestic and ceremonial objects. Where as, the stone objects resemble a knife, hammer, flat objects, among other items. Ccorca is located just 21 km away from the city of Cusco 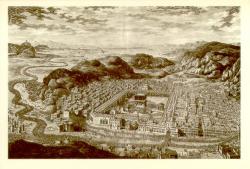 La Mecque - The systematic destruction of Saudi Arabia is under way—in silence. Historic mosques, tombs, mausoleums, monuments and houses: more than 90% of the old quarters of the holiest cities of Islam has been razed to make room for a new urban landscape of hotels, shopping centres and apartment blocks.  The urban planning has political and economic ends but it is also motivated by the religious ideology of Wahhabi Islam. Wahhabism is the dominant and official faith of Saudi Arabia and the reigning Saud family, the founders of the state. The father of the Wahhabist movement was Muhammad ibn ’Abd al-Wahhab (1703-92), who preached the return of Islam to its earliest origins. It was he who attacked the popular practices of worshiping saints and making pilgrimages to tombs and monuments in their memory, advocating the destruction of sacred sites as symbols of idolatry. These aspects of Wahhabist ideology (merged now with Salafism) lay at the root of the Taliban’s destruction of the Kabul Museum and the Bamiyan Buddhas in Afghanistan in 2001, among many other cases, not only in the Middle East. Irfan Al-Alawi, the director of the Islamic Heritage Research Foundation, a UK-based institution that has now moved to the US, has for years denounced the disastrous situation. Two years ago in Mecca the 1,300-year-old house of Hamza, the uncle of the prophet, was bulldozed to make way for a hotel. The house where Muhammad was believed to have been born in AD570 has also been demolished for a skyscraper. The litany of destruction includes the sites associated with the Prophet’s family: the house of Khadija, his first wife, and the tomb of his daughter Fatima, destroyed in Medina as early as the 1920s along with that of his nephew Hasan ibn Ali, the son of Fatima and Ali, the first imam of the Shi’ites. The Hilton hotel now stands on the ruins of the ancient house of Muhammad’s father-in-law. Five of the “Seven Mosques” built by Muhammad’s daughter were demolished 90 years ago. In 2002 Mecca’s Ajyad Fortress, built by the Ottomans in 1780 on a hill overlooking the Grand Mosque, was destroyed; in its place is one of the tallest buildings in the world, the Abraj Al-Bait. The Turkish government reacted with official protests against Saudi Arabia (rejected as undue interference) and a request for backing from Unesco. The transformation of the two holy cities, Mecca and Medina, is now complete. Few visual testaments—rare films and early photographs that escaped censorship—remain. Saudi Arabia may boast four Unesco world heritage sites, but none is an Islamic monument. In 2008 the organisation recognised the Nabataean ruins of Al-Hijr; in 2010 the desert settlement At-Turaif, the first capital of the Saudi dynasty from which Wahhabism spread; in 2014 the historic centre of Jeddah, with its Ottoman houses and the so-called Tomb of Eve which was sealed with concrete in 1975 to prevent pilgrims praying in front of it; and in 2015 the rocks of the Hail region, covered in prehistoric inscriptions.

Mbanza Congo -  National and foreign experts concluded Wednesday in Mbanza Congo, Zaire, a study of the archaeological material discovered during excavations carried out between 2013/2014, under the project of registration of this city on the UNESCO World Heritage list. In this first phase, which lasted eight days, the participants proceeded to the study of ceramics, pearls, metals and other archaeological material, in order to assess the chronology of the site of the city of Mbanza Congo. According to the director of the National Institute of Cultural Heritage, Maria da Piedade this study also aimed at discovering the chemical composition and type of archaeological collection, particularly pearls and ceramics, in order to define its composition, date of manufacture or introduction to the ancient capital of the Kingdom of Kongo.The director ensures that this was only a preliminary mission, which started in Luanda, where for two days the experts have developed secretarial work, stressing that the activity will continue in the near future.