York - An old train turntable has been excavated from the site and will be included in the new Hudson Quarter landscaping plans . The first railway station in York was a wooden structure on Queen Street and the first tracks went through the Hudson Quarter site. The station was superseded by the current railway station in 1877. Structural evidence of the old station's platforms, train turntables, auxiliary buildings and associated drainage systems were preserved amongst the piling and foundation beams belonging to Hudson House. Working alongside Squibb Demolition, LS Archaeology oversaw the removal of modern build up layers until the archaeological level was reached allowing the remains of this historic railway to be recorded and planned. The original station was devised by 'The Railway King' George Hudson designed by George Townsend Andrews and engineered by the 'Father of Railways' George Stephenson.

Uherské Hradište - More than eleven centuries after the fall of the Great Moravian Empire, there are still direct descendants from the Slavic noblemen living among us. A study of DNA samples, carried out recently by the Moravian Museum in Brno, found eleven men from the region of Uherské Hradiště who definitely have Great Moravian ancestors in their bloodlines. The Great Moravian Empire was the first west-Slavic state to emerge in the Central European area on what is now the territory of the Czech Republic, Slovakia, Poland, Hungary and Serbia. It was founded around the year 830 by the Slavic leader Mojmír and was the first joint state of the Slavonic tribes that became later known as Czechs and Slovaks.  The study compared the Y chromosome markers, that is DNA inherited from father to son, of more than 340 men with the DNA samples of 75 men buried between the 9th and 13th centuries near the town of Uherské Hradište.

Heddon-on-the-Wall - The remains of a section of Hadrian’s Wall have been unearthed at a building site in Heddon-on-the-Wall. Builders discovered a section of the Wall buried underneath the site while excavating for a new housing development located within the ancient monument’s World Heritage Site.

Tunnug Mound - The Russian Geographical Society (RGS) will carry out a second archaeological expedition to the Tunnug Mound that is located in the Tuva Valley of the Kings, this year, President of the Russian Geographical Society (RGS) Sergei Shoigu said in an interview with TASS, Rossiyskaya Gazeta and Komsomolskaya Pravda. "We are getting ready for a second archaeological expedition to the Tunnug Mound in Tuva. The mound is part of the Valley of the Kings, where a great number of "tsar" mounds from the Scythian era are located, said the geographical society’s president. Based on preliminary data, it dates back to the 9th-8th centuries BC. Shoigu said that the archaeologists hope to unearth artefacts belonging to the Pazyryk culture, inherent to the Altai Mountains, where an "Altai princess" mummy was found. "Here we hope to find something of that kind. And, possibly, something else, as there are fragments of permafrost in the mound, on the one hand, and, on the other hand, it is located in swampy terrain," he noted. The scientists also hope to find organic matter in the mound due to the permafrost.
http://tass.com/society/1049298

Bagosh  - Alexandria University’s Archaeological Mission unearthed several anchors on Monday while surveying the Bagosh area near Marsa Matrouh, under the supervision of the Central Department of Submerged Antiquities of the Ministry of Antiquities. Head of the Submerged Antiquities department Ihab Fahmy stated that the anchors were made of stones, irons and lead and dated from the Hellenistic era until the 20th century. He explained that marine activities were frequent through different ages and that ships had been anchoring at Bagosh port for 2000 years. The mission has also discovered several potteries in the North Africa area including Egypt, Greece, Italy, Spain and Palestine, Fahmy added.

Srirangapatna  - In an era of wearables and smartwatches, two sundials—time--keeping machines— installed by erstwhile Mysore ruler Tipu Sultan continue to enthral tourists and researchers even today at Srirangaptna in Mandya district. The researchers described the two sundials situated in Srirangapatna, one at Hyder Ali’s tomb (popularly known as Gumbaz) and another inside Jamia Masjid, as different from  most known sundials in design and concept. They said the sundials were originally designed to tell prayer times in mosques in the absence of a mechanical watch. 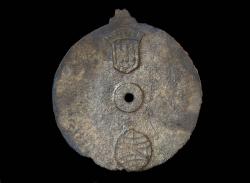 - In 1503, on the way back from a violent escapade in India, part of Vasco da Gama’s 4th Portuguese India Armada went down in a storm off the coast of what is now Oman. The wreck was discovered more than 20 years ago, but is now being newly recognized for its exceptional assets. Guinness World Records, ever the archaeological authority, has now confirmed that the wreck’s astrolabe and bell—retrieved in 2013 and 2014—are the oldest known examples of either nautical device, after research published yesterday in the International Journal of Nautical Archaeology explained the science behind the analysis. Though astrolabes are known from written sources to date to the 6th century—predating da Gama’s Armada by roughly a millenium—few have ultimately survived. “It’s a dream” to recover an astrolabe, especially the oldest ever found, says David L. Mearns, one of the study’s authors and the project director for the wreck’s recovery. The rare artifacts went out of production in the 18th century, he says, and those that were not lost to shipwrecks were likely melted down and repurposed. Astrolabes are used to measure the altitude of an object with respect to the horizon. With a chart of bright stars, it can be used to calculate latitude, or it can be used to measure the height of a mountain. This oldest astrolabe was likely made between 1496 and 1501. The portion recovered from the wreck measures less than seven inches in diameter and weighs less than one pound, and carries Portugal’s royal coat of arms. In a press release, the researchers explained that the object dates to a transitional moment in the tool’s history, and that it combines aspects of the older “planispheric” astrolabes with features of the “open-wheel” astrolabes that were not yet in use.