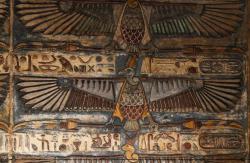 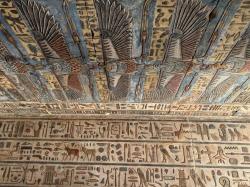 Esna - A joint German/Egyptian archaeological mission at the Esna Temple in Egypt has revealed some of the original colour and patterns within part of the temple complex during restoration works. The Esna Temple is dedicated to the Ancient Egyptian god, Khnum, and his consorts Menhit and Nebtu, their son, Heka, and the goddess Neith. The restoration project found the original colours and patterns under the middle ceiling above the entrance to the temple. A careful process of cleaning revealed a painting that depicts 46 eagles in a row, 20 of which have an eagle’s head (representing Upper Egypt), whilst the remainder the head of a cobra (representing Lower Egypt). Whilst cleaning the western wall of the temple, the researchers also found Greek inscriptions drawn in red ink that dates from the Roman period during the reign of Emperor Domitian (AD 81-96). The inscription records the day and eleventh month of the ancient Egyptian and Coptic calendars – “EPIPHI 5” which corresponds to around the time the temple was likely completed.

MEXIQUE - Chichen Itza - Tne of the most iconic spaces in the Chichen Itza archaeological zone is the Great Plaza, a meeting place from which you can see the main buildings of the ancient city: The Castle, the Ball Court, and the Temple of the Warriors, among others. In pre-Hispanic times, this esplanade was the axis of the ritual and political life of the Mayan city. Since May 10, the investigation works use two GPR teams or ground penetrating radar (by its English translation), to explore the square, from surface level and in a non-intrusive way.  The esplanade does not have a precise quadrangular or rectangular shape, it measures approximately 9 thousand square meters. In pre-Hispanic times, the Great Plaza of Chichén Itzá added at least 500 years of continuous use, between the Late Classic and the Early Postclassic periods (between 650 and 1150 AD), therefore, the prospecting will optimize the probabilities for the registration of elements of archaeological interest, which may include construction stages of the square itself, or stone walls, human burials, tunnels, cavities, old drains, paths, and even watercourses.

Papum Pare -  The remains of a 13th century settlement have been found inside a forest of Papum Pare district in Arunachal Pradesh. A 226-metre-long rampart made of stone blocks, burnt bricks and stone boulders along with a gate was found there. Symbols resembling bow and arrow and trident were inscribed on the stone blocks. A broken Shivalinga, sealing ball and potsherds were also found at the settlement where stone pillars were in use. Stone blocks of different shapes and sizes and 31 burnt bricks have been used to build the fortification. Prusias ad Hypium - Archaeologists have unearthed a unique architecture in the ancient city of Prusias ad Hypium,  the history of which dates back to the 3rd century B.C. Declared an Urban Archaeological Site by the Kocaeli Cultural Heritage Preservation Board, Konuralp’s Prusias ad Hypium is expected to become a frequented destination for people after the excavations are over. In the region, there are structures such as the ancient theater, city walls, aqueducts and Roman bridge.

Odessa - Members of the Ukrainian 126th Territorial Defense unearthed amphorae, or ancient containers used to store and transport liquid and dry goods which first reported the news. The tall, bottle-necked shape was common in Ancient Greek, Roman, and Byzantine pottery, however the earliest examples of the form date to the Neolithic period. The containers date from between the 3rd and 4th centuries B.C., when Odessa was a Roman settlement called Odessus  that developed from a Greek colony.

Letti - Cattle may have been domesticated in the Letti Basin of what is now Sudan some 10,000 years ago,. It had been previously thought that cattle were first domesticated from the wild aurochs in Turkey and Iraq, and then arrived in East Africa in the fifth millennium B.C. But Piotr Osypiński of the Polish Academy of Sciences and Marta Osypiński of the University of Wrocław said that they have found the remains of domesticated cattle with “aurochs-like” features in the Letti Basin, along with the bones of other wild species. The researchers are waiting for precise dating results of samples to confirm the age of the bones. “That group of people already knew ceramic vessels, used quern-stones to grind cereal grains (wild varieties of millet), so they can be called early-Neolithic communities,” Marta Osypiński said. “They still hunted wild savannah animals, with one only exception—cattle at an early stage of domestication.” 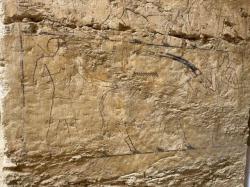 Saqqara - A 4,300-year-old tomb has been found in the Saqqara necropolis next to the Step Pyramid of Djoser, Egypt’s first pyramid, which had been built about 400 years earlier. Hieroglyphs on the tomb indicate that Mehtjetju, the high-status official buried there, served as inspector of the royal estate, a priest of the mortuary cult of the pharaoh Teti (r. 2323–2291 B.C.), and had access to sealed royal documents, explained Kamil Kuraszkiewicz of the University of Warsaw. Mehtjetju may have also served the pharaohs Userkare (r. 2291–2289 B.C.) and Pepi I (r. 2289–2255 B.C.). The tomb of Mehtjetju may be part of a larger complex of tombs holding the remains of his family, Kuraszkiewicz added. The researchers plan to return to the site in the fall. Castilly Henge - A rare stone circle has been found at a prehistoric ritual site in Cornwall, with seven regularly spaced pits mapped by a team of archaeologists. Bracken and scrub were cleared over the winter at Castilly Henge near Bodmin to allow archaeologists to survey the site. They found the pits lying in a crooked horseshoe formation. Experts believe the pits may once have formed a complete ring but ground conditions at the time of the survey left archaeologists unable to gather clear data on the northern part of the henge interior. Some stones had been removed and taken elsewhere, while others were probably pushed face down into the pits in which they once stood upright. Castilly Henge is believed to have been built during the late Neolithic period, about 3,000–2,500BC. Defined by an external bank and an internal ditch, the henge formed an amphitheatre-style setting for gatherings and ritual activities. Not all henges contain a stone circle, and there is only one other in Cornwall – Stripple stones on the slopes of Hawk’s Tor on Bodmin Moor. Archaeologists believe henge sites would have been used for gatherings and rituals.

USA – Wyoming - An analysis of archaeological research focusing on the mass amounts of Native American artifacts in the northern end of the Wind River Range was presented to the public for the first time Tuesday night, May 17, in Pinedale. Vlcek said the vast majority of material is about 1,000 years old, but some of it is up to 5,000 years old. The artifacts tell the story of prehistoric campsites, hunting sites and quarries for mining tools. He also found ancient bison bones that are eroding out of ice patches.