CHINE - Yuncheng. - Archaeologists found a stone carving chrysalis dating back to at least 5,200 years. The stone carving chrysalis, which is 2.8 cm long with the maximum abdominal diameter measuring 1.2 cm, was found in a semi-crypt house at the Shangguo Site in Wenxi County in the city of Yuncheng. Based on the unearthed pottery pieces, archaeologists speculated that this house belongs to the early stage of the late Yangshao Culture period, about 5,200 years ago. The Yangshao Culture, dating back 5,000 to 7,000 years, originated in the middle reaches of the Yellow River and is considered an important stream of Chinese civilization. Over the past 100 years, relics related to the silkworm culture have been unearthed in many places in Yuncheng City, said Tian Jianwen, a researcher with the provincial archaeology research institute. "At present, many silkworm cocoons and chrysalises discovered in Yuncheng City have been found in good condition, indicating that the ancestors of Yangshao Culture in southern Shanxi had raised silkworms," said Tian. The discovery of stone carving chrysalises provided important clues for the study of the origin and spread of silk, according to Tian.

Abou Qir - The Egyptian-French archaeological mission of the European Institute of Underwater Archeology (IEASM), working in Alexandria, discovered the wreck of a warship from the Ptolemaic period, and the remains of a Greek funerary area dating back to the beginning of the fourth centuryBC. 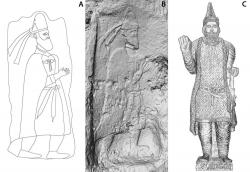 Rabana-Merquly  - A 2,000-year-old fortress built on a mountainside in what's now Iraqi Kurdistan could be part of a lost royal city called Natounia. With the help of drone photography, archaeologists excavated and cataloged the site during a series of digs between 2009 and 2022. Situated in the Zagros Mountains, the stone fortress of Rabana-Merquly comprises fortifications nearly 2.5 miles (4 kilometers) long, two smaller settlements, carved rock reliefs and a religious complex. The fortress was on the border of Adiabene, a minor kingdom governed by the kings of a local dynasty. These rulers would have paid tribute to the neighboring Parthian Empire, which extended over parts of Iran and Mesopotamia approximately 2,000 years ago. Carvings at the entrance to the fortress depict a king of Adiabene, based on the dress of the figure, in particular his hat, Brown said. The carving resembles other likenesses of Adiabene kings, particularly one found 143 miles (230 kilometers) away at the site of an ancient city called Hatra. While it's matter of speculation, Brown believes the fort was the royal city known as Natounia, or alternatively Natounissarokerta, that was part of the kingdom of Adiabene. The journal Antiquity published the research on Tuesday. 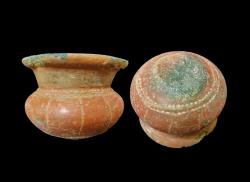 Cueva de la Cruz - Archaeologists have recovered a Maya chocolate-type vessel from the Cueva de la Cruz, near the coastal resort of Playa del Carmen, in Mexico’s Yucatán. Researchers from the National Institute of Anthropology and History (INAH) recovered the 13cm tall vessel after being notified by the Cenotes Urbanos project. It has a reddish colour on the outside and a black slip on the inside, partially covered by calcium carbonates. The decoration seems to provide a phytomorphic image, similar to a pumpkin. The vessel dates from the Late Preclassic period (300 BC to AD 250), and although lacking a spout, archaeologists suggest that the vessel was used for drinking chocolate. Maya chocolate was consumed as a hot liquid beverage, seasoned by mixing the roasted cacao seed paste into a drink with water, chilli peppers and cornmeal, and then transferring the mixture repeatedly between pots until the top was covered with a thick foam. The drink was used in official ceremonies and religious rituals, as funerary offerings, as a tribute, and for medicinal purposes.

Handan - The ruins of a heated kang dating back to the Shang Dynasty (1600-1046 BC) have been found at the Zhaoyao excavations in Handan City, Hebei Province. Kang, or heated peasant couch, is a living and sleeping platform with a heating system for residents of northern China. Since October 2021, 340 square meters have been excavated at the Zhaoyao site, partially revealing Shang Dynasty settlements. To date, the ruins of nine houses have been discovered at this site, and a heated kan has been found in house No. 5. The excavations at the Zhaoyao site are of great importance for studying the layout of the settlements of the early Yangshao culture, which is considered an important source of Chinese civilization and is widely known for its advanced pottery technology.

Brestovany - Builders found human bones when doing reconstruction on a kindergarten in Brestovany, a village near Trnava. They called archaeologists . More detailed research showed that it is a 4,000-year-old grave from the Early Bronze Age containing women’s jewels, such as bone beads, a copper bracelet and two willow-shaped earrings, the Monuments Board Trnava informed. The skeleton belonged to a woman buried in a curled position on her left side. Based on the found objects and the character of the grave, archaeologists were able to classify the discovery as from the Early Bronze Age, specifically to the bearers of the so-called Nitra culture. It belongs to the oldest cultures of the Bronze Age in Slovakia and its representatives are characterised by the gradual introduction of bronze production, an alloy of already used copper with tin, which resulted in a metal of better strength and hardness. 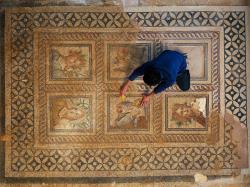 Metropolis - The 2022 season of archaeological digs will focus on the historical site's acropolis, agora, Araplıtepe Church and water wells. The digs aim to restore the eastern gate of the Hellenistic acropolis of Metropolis, to completely unearth the agora (city square), to reveal the entire plan of the Araplıtepe church as well as to investigate the water wells that have preserved their function from the Roman period to the present day. The monumental cistern structure, which started to be excavated in 2019, will be fully unearthed. At the same time, conservation and restoration work will begin on the 435-meter-long (1,427-foot-long) monumental fortification walls surrounding the acropolis. In addition, the mosaics discovered in 2021 in the Metropolis agora will be completely unveiled. Archaeological excavations to be carried out this year in the Araplıtepe Church, which is of great importance to the Christian world, will be completed as well. Moreover, hundreds of ceramic pieces and jugs were discovered in the bottom of a well in the praefurnium (furnace) of the balneum (bathing section) in Metropolis. It is estimated that water supplied from the well with a depth of approximately 11 meters was used in the balneum during the Roman period. Numerous finds found at the bottom of the well show that the well was last used about 1,800 years ago. The recent works in this area will also provide a deeper understanding for balneum. 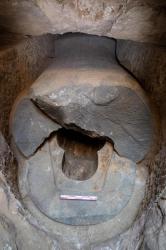 Abusir -  A tomb holding the remains of Wahibre-mery-Neith, an Egyptian military official who commanded battalions made up of foreign soldiers, has been unearthed in Giza’s Abusir necropolis by a team of researchers led by Miroslav Bárta of Charles University in Prague. Mostafa Waziri of the Supreme Council of Antiquities said that the shaft tomb, which has been dated to around 500 B.C., is about 20 feet deep and 46 feet square. A double sarcophagus was found on a bed of sand at the bottom of a second shaft cut into the bedrock of the main shaft. The outer sarcophagus is made of white limestone, while the inner is made of basalt. The damaged inner coffin was inscribed with passages from the Egyptian Book of the Dead describing the resurrection of the deceased and the journey to the afterlife. No mummy was found. Barta thinks the tomb was looted around the fourth or fifth centuries A.D., based on pottery that had been left behind by the intruders. A scarab, some 400 ushabti figurines made of faience, and two alabaster canopic jars were also recovered.

JORDANIE - A team of Jordanian and French archaeologists said Tuesday that it had found a roughly 9,000-year-old shrine at a remote Neolithic site in Jordan’s eastern desert. The ritual complex was found in a Neolithic campsite near large structures known as “desert kites,” or mass traps that are believed to have been used to corral wild gazelles for slaughter. Such traps consist of two or more long stone walls converging toward an enclosure and are found scattered across the deserts of the Middle East. Within the shrine were two carved standing stones bearing anthropomorphic figures, one accompanied by a representation of the “desert kite,” as well as an altar, hearth, marine shells and miniature model of the gazelle trap.The researchers said in a statement that the shrine “sheds an entire new light on the symbolism, artistic expression as well as spiritual culture of these hitherto unknown Neolithic populations.” The proximity of the site to the traps suggests the inhabitants were specialized hunters and that the traps were “the center of their cultural, economic and even symbolic life in this marginal zone,” the statement said.