EGYPTE- Saqqara -The Secretary-General of the Supreme Council of Antiquities, Mostafa Waziri, announced Monday that a 16-meter long papyrus scroll has been located in the Saqqara archeological area, the first finding of this sort in a century. He said that the papyrus was fully translated and contains texts from the Pharaonic Book of the Dead. This marks the first time a complete papyrus document has been uncovered in a century, 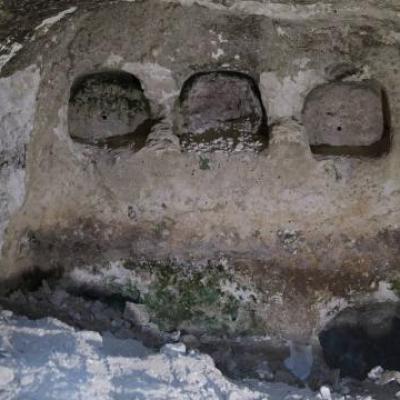 Erciş - A three-room Urartian tomb with a rock-cut libation (liquid offering area) to offer gifts to the gods was unearthed in the Erciş district of Van, in eastern Turkey. During this study, it was determined that there was an Urartian tomb with 3 rooms in the area close to the area where the Urartian worship area emerged as a result of the withdrawal of Lake Van. There are two small burial chambers to the right and left of the main chamber. The chamber tomb dug into the calcareous rock, reflects the Urartians’ classical characteristics. According to researchers, treasure hunters caused minor damage to the tomb. Emphasizing that the tomb is an important remnant in terms of Urartian architecture, Çavuşoğlu said, “The three-room chamber tomb is entered through an oval arched door. Then there is a small chamber on the left and right. It is not a well-known practice, but a channel for liquid libation was opened just above the entrance. “It is a chamber tomb we have seen for the first time. The important thing for us is that the tomb consists of 3 rooms, two rectangular openings above the entrance, and liquid libation were made here,” he said. A libation is a ritual pouring of a liquid, or grains such as rice, as an offering to a deity or spirit, or in memory of the dead. The libation could be poured onto something of religious significance, such as an altar, or into the earth. 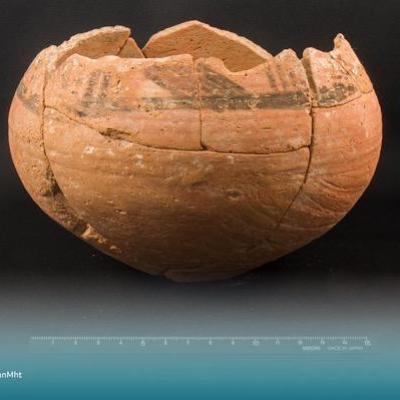 Tanuf - A new human settlement was documented in the Wilayat of Nizwa, Al Dakhiliyah Governorate. Archaeological remnants was found proving the existence of human settlement in a cave in the Tanuf area in the Wilayat of Nizwa dating back to the Wadi Suq era. A number of items were found, most notably a well-preserved pottery vessel. The Ministry added that many nearby archaeological sites have been documented, most notably the Bronze Age towers and tower tombs dating back to the Hafeet era, dating back 5,000 years. Scarborough - Finds discovered at a Stone Age settlement unearthed in North Yorkshire have helped shed new light on the lives of hunter-gatherers living around 10,500 years ago. Archaeologists uncovered animal bones, tools and weapons, along with rare evidence of woodworking, during excavations at the site near Scarborough. Experts said the items suggested their owners were far from "struggling to survive", as many may imagine of people alive at the time. Dr Nick Overton, from the University of Manchester, said the excavation had enabled them to learn more about "these early prehistoric communities". The site originally lay on the shore of an island in an ancient lake and dates to the Mesolithic period, according to the team from the universities of Manchester and Chester, with thick deposits of peat gradually burying and preserving the site over thousands of years. The team said the dig uncovered evidence of a wide range of animals being hunted, including elk and red deer, and smaller mammals such as beavers and water birds. The bodies of hunted animals were also butchered and parts of them intentionally deposited into the wetlands at the island site, they said. Hunting weapons made of animal bone and antler had also been decorated and taken apart before being deposited on the island's shore. This, the archaeologists believed, showed that Mesolithic people had strict rules about how the remains of animals and objects used to kill them were disposed of. Minya - Archaeologists have discovered the body of an eight-year-old child and 142 dogs buried together in Egypt. The discovery, made near Cairo, was dated between 1st century BCE and 1st century CE. During this time, the Romans assumed control over Egypt. The buried dogs, 87% of which were puppies, are thought to have died as a result of flooding. The Archaeologists were able to assess that they died simultaneously, with no violence involved. They also found blue clay on the dogs, which was found in reservoirs during that period, supporting the theory that the dogs had drowned. Despite ancient Egyptians worshipping numerous animals, dogs were not generally believed to be sacred. They were used as pets and for labor. However, some dogs were mummified and buried with their owners. The ancient Egyptians believed that the dog-headed gods Anubis and Upuat were with the souls of the dead in the afterlife. Some dogs were sacrificed to play the role of an amulet in a burial.  The only case to which similarities can be drawn is the discovery of a child's body with 12 dogs in a cemetery in Hierakonpolis.It is unknown why the boy was buried there. The researchers' working theory is that the boy died while caring for the dogs and was buried with them.  It is unlikely that the boy and his dogs were executed. According to Egypt Today, children in ancient Egypt were treated well with access to education and were forbidden to learn a trade. Adding to the mystery, the boy was found with a linen bag over his head. The only other time a body was found with a linen bag covering the head, the person had been executed by an arrow. Nahal Darga - An ancient Hebrew coin minted during a Jewish rebellion against Roman rule in Judea has been found during an excavation of caves by the Dead Sea, the Israel Antiquities Authority recently announced. The bronze coin was discovered at the Nahal Darga Nature Reserve. It is dated to the second year of the Bar Kokhba revolt, a failed Jewish uprising against Roman rule in Judea that broke out in 132 CE, following Roman repression of Jewish practice. The rebellion lasted until 135 CE, ending with the widespread killing and enslavement of the Jewish population, their exile from Jerusalem, and the renaming of the province of Judea to Syria Palaestina. One side of the coin includes a depiction of a date palm with the name “Shimon” in ancient Hebrew, an apparent reference to Shimon Bar Kokhba, the leader of the eponymous revolt. The other side features a vine leaf with a surrounding inscription reading, “Year Two of the Freedom of Israel.”