Qiuxian- An ancient tomb believed to date back to the Ming Dynasty (1368-1644) has been unearthed at a construction site in Qiuxian County, north China's Hebei Province. This was reported by The Xinhua News Agency. According to the local cultural relic protection department, the octagonal-shaped tomb was found earlier this month. It is well preserved with delicate brick carvings. Two coffins are side by side at the bottom, each with a skeleton inside. Four well-preserved white glaze plates and a blue and white porcelain bowl were also unearthed, believed to belong to the mid-Ming Dynasty.

Haida Gwaii - Archaeologists found the tooth in a cave in Haida Gwaii, which is an archipelago off British Columbia's north coast. DNA analysis and radiocarbon dating shows it belonged to a domesticated dog that lived 13,100 years ago. The DNA analysis shows the dog was related to the grey wolf that was native to Asia at the time, which means it came across the Bering Strait with humans. Prior to this discovery, the earliest evidence of dog domestication in the Americas was the 10,190 to 9,630-year-old domestic dog remains found in Illinois. The Canadian caves also held ancient human artifacts, including stone tools and spearpoints, which suggests humans occupied this region 200 years than previously believed and likely used the dog for hunting.The team found bones from bears, deer, canids, salmon and other animals that range from 13,400 to 11,200 years old, along with the 13,100-year-old canine tooth.  The study, published in Quaternary Science Reviews, highlights three karst caves in the south of Haida Gwaii: K1, Gaadu Din 1 and Gaadu Din 2.

Sheikh Hamad - The joint Egyptian-German archaeological mission discovered a more than 13,000 ostraca dating back to the Ptolemaic era, the beginning of the Roman era, the Coptic era and the Islamic era, during excavations in the archaeological area of ​​Sheikh Hamad near the Temple of Atribes, west of Sohag Governorate.  Mostafa Waziry said that these ostraca (fractures of pottery pots) have inscriptions in the ancient Egyptian language in the form of demotic, hieratic and hieroglyphic scripts, or in the form of Greek, Coptic and Arabic writing. These writings refer to the financial transactions that took place during this period, related to buying wheat and bread. It also contains lists of the names of a number of people and their families. the members of the mission are examining and studying the ostraca carefully to get to know the community and its activities in that important period in the history of Egypt, as the writings on some ostraca showed it possibly belonged to a school for teaching demotic, hieratic and hieroglyphics and Greek language. Mohamed Abdel Badei said that the mission also reached a number of Greek ostraca dating back to the end of the Roman era or the Byzantine era (the period from the third until the sixth century AD).

El Bahnasa - Archaeologists have discovered the mummified remains of a man and woman who died about 2,500 years ago in El Bahnasa, about 136 miles south of Cairo. Three gold foil amulets in the shape of tongues were found buried with the mummies. Two of the foils were larger, and one was for a 3-year-old child. They date to the Roman period in Egypt, starting in 30BC . Ancient Egyptians occasionally placed gold-foil tongues inside the mouths of the dead to enable them to speak to the god of the underworld, Osiris, in the afterlife. In a rare find, one of the tombs, which dated back to the Saite dynasty, which ruled between 664–525 BC, was completely sealed. Inside, archaeologists discovered a limestone sarcophagus containing a well-preserved male mummy with a golden tongue in its mouth. Other grave goods of the tomb included a scarab amulet, four canopic jars in which mummified organs were stored, and 400 funerary figurines made of glazed pottery. The second tomb of the woman had been opened in ancient times and the remains were not in a poor condition. Inside the tomb were several pottery beads, a stone amulet, and a figure of the falcon-headed god Horus.

Blaundus - Archeologists have discovered two statues dating back 2,000 years in excavations of the ancient Roman city of Blaundus. Blaundus, also known as Blaundos, was first built by Macedonians that came to Anatolia following the military campaign of Alexander the Great. The ruins of the ancient city, located in what is now the Ulubey district of Usak province, was later occupied by the Romans. Dig work to unearth the city, which started in 2018, are currently focused on the area where a temple to the Greek mythological goddess Demeter is located. The team had discovered two statues in the courtyard of the temple located in the center of the city. Can, who is leading the excavations, said one of the discovered statues was 185 centimeters (over 6 feet) tall with no head, while the other was missing its head, right arm, and both legs. "We don't know yet whether the statues are from the temple site or from street-side honorifics," he said, adding that further research on the finds was ongoing. "Both finds are male marble statues. We have not yet determined who they are -- whether they are gods, emperors, or statesmen," Can said. Noting that the statues may have been inspired and created in the Roman-era style, he said: "We can say that the art of sculpture has been at its peak since the second half of the 4th century BC." 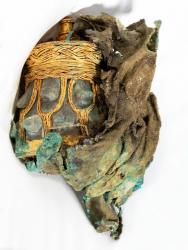 Galloway – A stunning gold-wrapped jar crafted out of rock crystal has finally been uncovered in its entirety, revealing a Latin inscription that might provide new clues about its mysterious origins. Researchers at National Museums Scotland, where the Viking-Age vessel is being conserved, think the receptacle was probably used for religious purposes. And one expert believes it may have been a diplomatic gift from the Roman Empire to an Anglo-Saxon kingdom in Britain. The treasure was discovered in southwest Scotland in 2014 and is part of the Galloway Hoard - Around 5 centimeters (2 inches) in height and resembling a perfume bottle, the jar's inscription states "Bishop Hygauld had me made." Researchers believe this is an indication it was made in the powerful Anglo-Saxon kingdom of Northumbria, in current-day northern England and southern Scotland. Although the Galloway Hoard dates back to around 900 AD, this object is believed to be much older -- and Goldberg's theory is that a notable individual from the Roman Empire gifted it to the Anglo-Saxons in the form of a Corinthian-style crystal column used for holding perfume or a liquid "of great value" -- before it was then converted into a jar and plated with gold. The textiles the jar was wrapped in are currently being examined too -- so Goldberg hopes there will be more exciting discoveries to follow in the next two years. Tel Tsaf - round 7,000 years ago, beer was produced in the area of modern Israel and likely consumed on convivial occasions. The researchers analyzed two pottery strainers unearthed in two archaeological sites and were able to confirm that they were indeed used to strain beer. The finds, published in the December issue of the Journal of Anthropological Archaeology, also suggest a higher level of complexity in terms of social relations in the region during the period known as Chalcolithic than previously thought. The earliest evidence for the production of cereal-based (wheat/barley) fermented beverages in the southern Levant was documented in the context of complex hunter-gatherers. The strainer vessels – clay colanders used for filtering liquids or sifting through other materials – first appeared in the early Chalcolithic period. The team analyzed one artifact dating back to around 7,000 years ago found in Tel Tsaf – a prehistoric site in the Jordan Valley – and the second one uncovered in the village of Peqi‘in in the Upper Galilee (a site dating back to 4500 to 3900 BCE). In the first case, the strainer was retrieved in an area where cooking facilities and silos stood. The Peqi‘in vessel was found near the entrance of a cave used as a burial site. On both, the researchers found traces of cereals and yeast, confirming that the tools were used to strain beer. The contexts where the strainers were found suggest a connection between drinking and convivial moments within the communities. “In the case of the Tel Tsaf finds it might be possible to see this drinking in connection with communal storage units and ritual activity, and it is tempting to suggest that the filling of the silos was connected with extensive drinking,” they further wrote. “The Peqi‘in finds point to a sepulchral context and fit well with other evidence of ritual drinking associated with burials.”After being filtered in the large communal bowl, the beer was likely poured into individual cups. 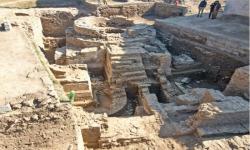 Bazira - The archaeologists have discovered the most ancient Buddhist apsidal temple of Pakistan in Bazira area of Barikot tehsil in Swat. According to Prof Luca M Olivieri, it is possible to date the foundation of the Buddhist sacred structure to the Mauryan period, certainly to the 3rd century BC. This was followed by a major reconstruction undertaken in the 2nd century BC.  After the rule of King Menander in the mid-second century, the monument was enhanced and kept in function for centuries till the third and fourth century when it was eventually abandoned, as the Kushan city of Bazira was razed by an earthquake. The archaeologists unearthed not only a well-preserved four-metre high monument, the apsidal temple, but also one of the main streets of the ancient city leading eventually to the discovery of one of the gates of the city. “We have found coins, among which a silver specimen issued by King Menander, an onyx-made seal decorated with a Hellenistic intaglio depicting the image of a youth in Greek attire with a Kharosthi inscription, a monumental Kharosthi epigraph, many other Kharosthi inscriptions on pots, and potsherds belonging to the Indo-Greek cultural horizon such as fish plates and polished black pottery that imitates Attic models,” said Dr Michele Minardi.