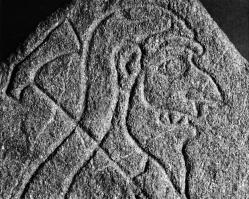 Rhynie - Archaeologists have launched a bid to find out the origins of a mysterious six-foot high Pictish stone carving uncovered in a field 37 years ago. The slab, inscribed with a distinctive figure carrying an axe, has been dubbed the ‘Rhyine Man’ after the Aberdeenshire village in which it was found by a farmer ploughing his field. But in the decades since its discovery, little more is known about the figure the stone depicts, or why it was created. Now a team of archaeologists from the University of Aberdeen are leading a dig which they hope will yield answers to the mystery of Aberdeenshire’s ‘oldest man’. Believed to date from the fifth or sixth century, the Rhynie Man carries an axe upon his shoulder, has a large pointed nose and wears a headdress. The area where he was found is thought to have been a home to high-status Picts, and the carving could be tied into their long-vanished religion. Previous work at the site uncovered pottery from the Mediterranean, glass from France and Anglo-Saxon metal work, suggesting that the area was a hub for international trade and high-value goods and could have been the fortified base of a royal family. Dr Gordon Noble, Senior Lecturer in archaeology at the University of Aberdeen, said the excavations would focus on where the Rhynie Man was first found by local farmer Kevin Alston at Barfla, and around another Pictish standing stone called the Craw Stane, to the south of the village. 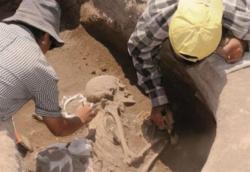 Oylum - Two 3,900-year-old female skeletons from the Bronze Age have been unearthed at Oylum Mound in the southeastern province of Kilis.  Oylum is located three kilometers away from the Syrian border and is one of the largest mounds in the southeastern Anatolian region in terms of its size. Excavations head Associated Professor Atilla Engin said they were almost done with the excavations this year. He said they compiled important data during the work, and added, “We worked particularly in the layers of the Mid Bronze Age. We can say that the big monumental structure that was unearthed in previous years was a palace.” Engin said the structure had at least three floors, and continued: “The most important part of the palace is the area where the king lived with his family and was called seraglio. The structure was exposed to a severe fire. We think that the fire was caused by an attack. We unearthed some parts of the palace and found 3,900-year-old female skeletons. We think they burned to death in the palace.” Engin said a large portion of the palace was still underground.  He said they would begin a new project to protect the palace, and Oylum Mound could become an open-air museum in future.  “We have found housings and narrow streets here. The dead people were buried inside the houses,” he said. 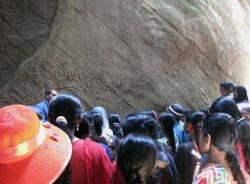 Edakkal Cave - The pre-historic rock art site at the Edakkal Cave on the Ambukuthy Hills in Wayanad district is facing neglect and ruin. Unrestricted entry of tourists and granite quarrying activities near the monument are the major threats to the neolithic monument. A national workshop held at Sulthan Bathery on ‘Conservation of Edakkal Petroglyphs’ in 2013, as part of securing the UNESCO World Heritage status for the monument, had discussed potential threats to the rock carvings and scientific measures to conserve the monument. It had identified seepage of rainwater from the Ambukuthy Hills as a threat to the wall engravings and had recommended the formation of a core committee to suggest measures to divert surface run of water. It said necessary measures should be taken to prevent wedging due to the growth of vegetation along the cracks, another threat to the engravings. Since huge blocks of rocks near the cave faced the threat of collapse due to the impact of blasts at the nearby granite quarries, experts had recommended that it be bolted properly instead of removing it. Vibrations from the granite quarries should be studied and necessary action should be taken to conserve the monument.

Denizli - During recent excavations at the Beycesultan Tumulus in Denizli's Çivril district, archaeologists have discovered a total of 40 cultural layers that continue uninterrupted from the late Chalcolithic period to the Late Bronze Age. Professor Eşref Abay said that the Beycesultan Tumulus, which is located in the Upper Menderes Basin, is in a prime strategic location, as it is situated on the natural routes that connect the Aegean coast and the highlands along with central Anatolia and the southern regions. He said they discovered settlements that have not yet entered into the archaeological literature. "Beycesultan Tumulus sheds light on a history going back 5,000 years," Abay said. During the excavations on the tumulus, the archaeologists found human bones and pottery sherds. Moreover, most parts of the "Burned Palace," which is a huge building dating back to the middle of the Bronze Age, was unearthed. The artifacts unearthed in the tumulus, which harbored various settlements from the early Bronze Age to the Seljuks, have been handed over to the Directorate of Denizli Museum to be displayed. The residential areas, which offer insight into the settlements built in the tumulus, will be covered by a roof. Abay said that more than 100 different settlements that were previously unknown to archaeological literature were discovered during the extensive surface survey conducted between 2003 and 2010.

ROYAUME UNI – Bridport – Archaeologists investigating an ancient burial site discovered near Bridport have dated the remains back to the Bronze Age. Experts stumbled upon the site two years ago and have been working to establish its significance. The remains of three people aged between 18 and 25 were uncovered at the site, in Long Bredy, in July 2013. And after hours of painstaking analysis, archaeologists have now determined that the bodies can be dated back to between 800 and 600 BC. Martin Papworth, an archaeologist working with the National Trust to examine the site, said no other burial from this period had ever been discovered in Dorset. “It’s a very significant find from a period with little evidence for the disposal of the dead,” he said. “It’s an important window into the past – the first clues of the people who lived in Dorset at that time.” Archaeological sites in West Dorset are often buried so deeply that they are rarely unearthed – unless by accident. Fortunately, National Trust experts who were following routine drainage and sewage works at Golly Knapp – a 17th century cottage in the village – were able to step in and call a halt to the digging when the site was inadvertently discovered. The ancient grave, which turned out to contain the remains of three people found in a crouched position, was then carefully excavated with several bones removed for detailed analysis. Archaeologists working on the site have now been able to trace the remains back through the centuries using radiocarbon dating, placing the bodies somewhere between the Bronze and Iron ages.