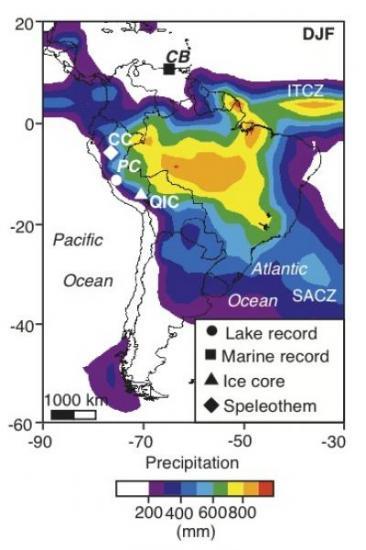 The study compared the record in the Pumacocha sediment core (PC) to various geological records from South America -- Cascayunga Cave (CC), the Quelccaya ice Cap (QIC), and the Cariaco Basin (CB) -- as well as the annual position of the Intertropical Convergence Zone (ITCZ). Credit: U. of Pittsburgh

A 2,300-year climate record University of Pittsburgh researchers recovered from an Andes Mountains lake reveals that as temperatures in the Northern Hemisphere rise, the planet's densely populated tropical regions will most likely experience severe water shortages as the crucial summer monsoons become drier. The Pitt team found that equatorial regions of South America already are receiving less rainfall than at any point in the past millennium.

The researchers report in the Proceedings of the National Academy of Sciences (PNAS) that a nearly 6-foot-long sediment core from Laguna Pumacocha in Peru contains the most detailed geochemical record of tropical climate fluctuations yet uncovered. The core shows pronounced dry and wet phases of the South American summer monsoons and corresponds with existing geological data of precipitation changes in the surrounding regions.

Paired with these sources, the sediment record illustrated that rainfall during the South American summer monsoon has dropped sharply since 1900—exhibiting the greatest shift in precipitation since around 300 BCE—while the Northern Hemisphere has experienced warmer temperatures.

Study coauthor Mark Abbott, a professor of geology and planetary science in Pitt's School of Arts and Sciences who also codesigned the project, said that he and his colleagues did not anticipate the rapid decrease in 20th-century rainfall that they observed. Abbott worked with lead author and recent Pitt graduate Broxton Bird; Don Rodbell, study codesigner and a geology professor at Union College in Schenectady, N.Y.; recent Pitt graduate Nathan Stansell; Pitt professor of geology and planetary science Mike Rosenmeier; and Mathias Vuille, a professor of atmospheric and environmental science at the State University of New York at Albany. Both Bird and Stansell received their PhD degrees in geology from Pitt in 2009.

"This model suggests that tropical regions are dry to a point we would not have predicted," Abbott said. "If the monsoons that are so critical to the water supply in tropical areas continue to diminish at this pace, it will have devastating implications for the water resources of a huge swath of the planet." 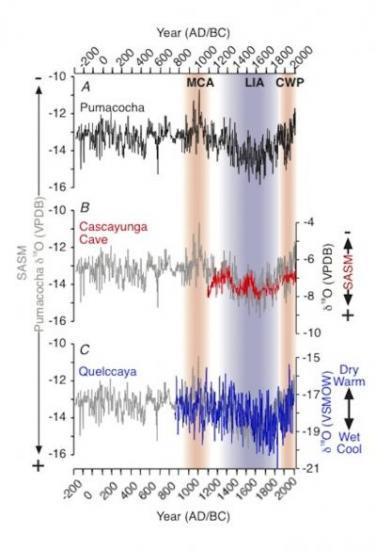 This shows levels of the oxygen isotope delta-O-18 from Pumacocha overlaid with corresponding levels from Cascayunga Cave (red) and Quelccaya Ice Cap (blue). Credit: U. of Pittsburgh

The sediment core shows regular fluctuations in rainfall from 300 BCE to 900 CE, with notably heavy precipitation around 550. Beginning in 900, however, a severe drought set in for the next three centuries, with the driest period falling between 1000 and 1040. This period correlates with the well-known demise of regional Native American populations, Abbott explained, including the Tiwanaku and Wari that inhabited present-day Boliva, Chile, and Peru.

After 1300, monsoons increasingly drenched the South American tropics. The wettest period of the past 2,300 years lasted from roughly 1500 to the 1750s during the time span known as the Little Ice Age, a period of cooler global temperatures. Around 1820, a dry cycle crept in briefly, but quickly gave way to a wet phase before the rain began waning again in 1900. By July 2007, when the sediment core was collected, there had been a steep, steady increase in dry conditions to a high point not surpassed since 1000.

To create a climate record from the sediment core, the team analyzed the ratio of the oxygen isotope delta-O-18 in each annual layer of lake-bed mud. This ratio has a negative relationship with rainfall: Levels of delta-O-18 are low during the wetter seasons and high when monsoon rain is light. The team found that the rainfall history suggested by the lake core matched that established by delta-O-18 analyses from Cascayunga Cave in the Peruvian lowlands and the Quelccaya Ice Cap located high in the Andes. The Pumacocha core followed the climatological narrative of these sources between the years 980 and 2006, but provided much more detail, Abbott said. 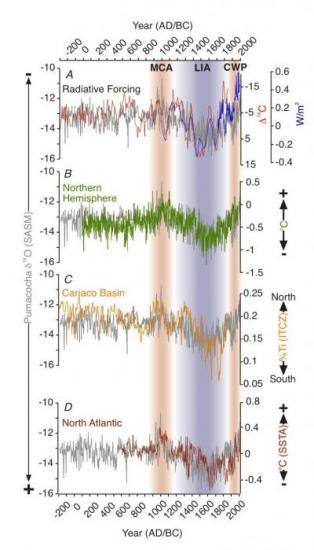 Delta-O-18 levels from Pumacocha correlate with geological temperature records, including solar radiation levels, titanium concentration at Cariaco Basin, and annual temperatures in the Northern Hemisphere and North Atlantic. Credit: U. of Pittsburgh

The team then established a connection between rainfall and Northern Hemisphere temperatures by comparing their core to the movement of the Intertropical Convergence Zone (ITCZ), a balmy strip of thunderstorms near the equator where winds from the Northern and Southern Hemispheres meet. Abbott and his colleagues concluded that warm Northern temperatures such as those currently recorded lure the ITCZ—the main source of monsoons—north and ultimately reduce the rainfall on which tropical areas rely.

The historical presence of the ITCZ has been gauged by measuring the titanium concentrations of sea sediment, according to the PNAS report. High levels of titanium in the Cariaco Basin north of Venezuela show that the ITCZ lingered in the upper climes at the same time the South American monsoon was at its driest, between 900 and 1100. On the other hand, the wettest period at Pumacocha—between 1400 and 1820, which coincided with the Little Ice Age—correlates with the ITCZ's sojourn to far south of the equator as Northern Hemisphere temperatures cooled.

Provided by University of Pittsburgh