New research suggests that this coin marks an eclipse of Jupiter by the moon.
It happened on January 17, 121 BC and was visible in Antioch, the capital of the Seleucid Empire. The coin itself show Zeus with a crescent moon above his head and a star like object hovering above the palm of his right hand. 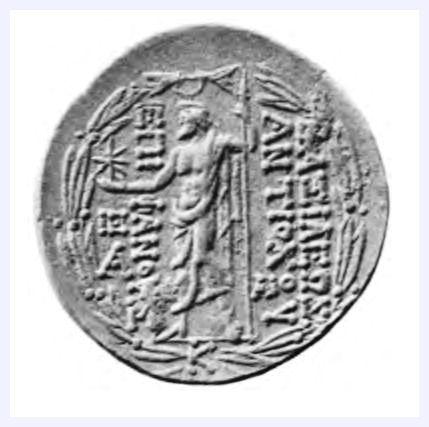 An unusual Greek coin, minted around 120 BC, may have marked a moment in time when people in ancient Syria saw Jupiter being blocked out by the moon.
On one side is a portrait of Antiochos VIII, the king who minted it. On the reverse is a depiction of Zeus, either nude or half-draped, holding a sceptre in his left hand. Above the god's head is the crescent of the moon, and his right arm is outreached with a star like figure (that may in fact be Jupiter) hovering just above his palm.
"Nobody ever re-used this iconography again - it was a one off," said Professor Robert Weir, of the University of Windsor in Canada, who presented his research recently at the annual meetingof the Archaeological Institute of America.

Antiochos VIII was ruler of the Seleucid Empire, a kingdom created by one of Alexander the Great's officers, after the great conqueror died in 323 BC. By the time of Antiochos this realm was composed of a rump of territory centred on the city of Antioch, in south-eastern Turkey.

The empire had been in decline for some time, with the Parthians gaining territory in the east, the Romans in the west and the Hasmoneans, a dynasty of Jewish kings, coming to power in the south.

Antiochos's rise to the throne was brutal to say the least. His mother was a woman named Cleopatra Thea, and he started his rule having to share the throne with her. "She was a very oppressive, domineering sort of woman as far as we can gather," said Professor Weir. "She had just killed his brother for no good reason."

Perhaps fearing for his own life Antiochos VIII had her put to death in 121 BC, making him sole ruler of what was left of the Seleucid kingdom.

Why the cosmic iconography?

Weir is a Classics professor with an interest in astronomy and ancient coins. He was curious why Antiochos VIII would mint a piece of currency with such an unusual drawing - could there have been something going on in the night sky?
"I did some calculations to see what was visible from Antioch, the capital of the Seleucid Empire - I came up with some interesting patterns." Weir found that on January 17, 121 BC, the city's residents would have seen Jupiter blocked out by the moon, an event modern day astronomers call an "occultation."

Also "Jupiter, when it was eclipsed by the moon, was in the constellation of Cancer, which is a very significant constellation," he said. "This means that there might be a great king coming, or being born - in Syria, because Cancer governs that part of the world the ancient astrologers believed."

That wasn't all that was going on in the night sky.

"I noticed that there were other favourable occultations happening at the same time. There was another occultation of Jupiter within the year and just a week after the first one there was an occultation of Venus which is also a very good omen," he said.

Antiochos VIII, a king ruling a shrinking empire alongside his murderous mother, may have felt that the heavens were finally with him. "It was significant in a good way - an occultation of Jupiter has to do with omens for kings."

Weir pointed out that astrologers were powerful figures in the ancient world and the discipline they practiced was influential. "These people were everywhere and we know they were influential in influencing emperors in Rome for instance," he said.

"I think it's fair to say they probably had a foot in the door in the court of the Seleucids."
The heavens turn against him.

Unfortunately for Antiochos VIII his rule would be anything but great. In the years that followed his empire would endure conflict, with one of his brothers, Antiochos IX, disputing his right to the throne. Eventually the two had to agree to divide what was left of the Seleucid kingdom.

In the meantime the king's run of cosmic good luck had come to an end. Weir said that "a few years after he killed his mum, there were (all) sorts of really bad luck eclipses of Mars and Saturn."

Even worse, shortly before the coin stopped being minted, around 114 BC, "something happened in the heavens that happens only once every 2,000 years or so," he said. "The moon eclipsed Mars and Saturn at the very same time." An event "that's about the worst omen you can get."

The heavens, it seemed, had turned against the king.