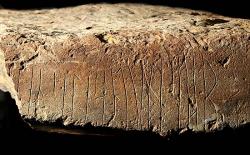 Naversdale - A viking runestone with a religious inscription has been discovered on a farm owned by archaeologist Dr Sarah Jane Gibbon, an expert on Norse church history. Found by Dr Gibbon’s father, Donnie Grieve, a retired teacher from Harray, the runes on the broken stone are a 19-character Latin passage of part the Lord’s Prayer — “who art in heaven hallowed”. Measuring approximately 8cm by 24cm, it was discovered by Mr Grieve at Naversdale farm in Orphir while he was gathering building stone from a field on September 26. He said: “I recognised it right away as being runes. It’s very recognisable and very clear.“It’s unusual, because it’s a Latin inscription — part of the Lord’s Prayer. I don’t think there’s any record of any inscription like that in Orkney or Shetland, so it’s unusual. “There are plenty of runes, but they are mostly viking graffiti. This is something a bit different.”Dr Gibbon said it was not known how or when the runestone came to Naversdale, but there were a number of possible scenarios.“Was the inscription carved on a stone in a medieval structure on the farm, or was it brought here at a later date from somewhere else, perhaps from elsewhere on the Swanbister Estate?” she said.“It would be fascinating to find out more about the history of our farm and the buildings on it, and we would be delighted to hear from anyone with information.”Dr Gibbon added: “I am looking forward to discovering as much as I can about the runestone, especially as the preliminary findings indicate it is from a medieval Christian context, which is my main area of interest. The fact it was found where I live, by my dad, just makes this even more fascinating.” 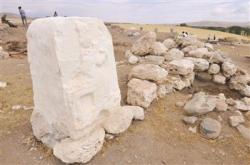 Kayalıpınar - A grand piece of Hittite legacy has been uncovered in Sivas’ Yıldızeli district, with a palace being the latest discovery at the “Kayalıpınar Excavation Site”. The palace, estimated to have been built in 1500 B.C., has been classified as a protected site by local authorities. Archeologists will further excavate the site immediately where the palace was discovered to reveal detail that could further shed light on the palace.German-based Academic Vuslat Müller Karpe said this year the Kayalıpınar excavations ceased ended relatively quick as the team assigned to the excavation had completed all necessary excavation work. Noting that Kayalıpınar was home to four different civilizations in the past, Karpe said the palace has unearthed many artifacts from the Hittite era, found from among the 40-plus room palace.“We have unearthed more than 100 pieces of military equipment in the palace’s storage area,” she said.Tablets with Hittite script were also part of the discovery, Karpe added, with the tablets depicting prophecies, religious festivals as well as bird fortune-telling, among other scenes.Karpe advised that the palace had been completely burned down once only to be reconstructed again, with the Hittite empire, ruling over most of the Anatolian Peninsula, disintegrating in 1178 B.C.

Rome - At 4 p.m. Tuesday, in the Basilica of San Silvestro at the catacombs of Priscilla, the Pontifical Commission for Sacred Archaeology will present the results of the work carried out there during the last five years. The speakers at the presentation will be Fr. Ciro Benedettini C.P., vice director of the Holy See Press Office; Cardinal Gianfranco Ravasi, president of the Pontifical Commission for Sacred Archaeology (PCAS); Msgr. Giovanni Carrù, secretary of the same Commission, Fabrizio Bisconti, superintendent; Giorgia Abeltino, head of public policy at Google; and Barbara Mazzei and Raffaella Giuliani, both members of PCAS. During the last five years, archaeological excavation works have been carried out, along with the conservational restoration of the paintings inside the catacombs and the renovation and reorganisation of one of the most evocative spaces, the basilica in which Pope Silvestro was buried. Of particular note is the restoration of the cubiculum of Lazzarus, in the subterranean cemetery close to the papal basilica, which was the last in a long series of conservational procedures carried out in the cemetery of Priscilla. The basilica of San Silvestro is composed of two spaces, one dedicated to worship and the other used in the past as a deposit for ancient sculptural material unearthed during the excavations. These include over 700 fragments of sarcophagi, meticulously restored, from the necropolises which during the late imperial age extended along this part of the Via Salaria Nova. The result is an important body of late-ancient funerary sculptural works, arranged and presented to the public as a museum exhibit. This valuable example of sculptural heritage may be viewed on-line at the site mupris.net; the complex of the catacombs of Priscilla
http://en.radiovaticana.va/news/2013/11/19/catacombs_restored_in_rome/en1-748089 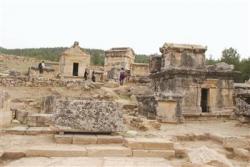 Hierapolis - Turkey’s largest ancient graveyard, dating back 2,500 years ago, is being unearthed in the ancient city Hierapolis in the western province Denizli’s Pamukkale.Excavations have been on going in the ancient city and its necropolis by an Italian team since 1957.Tasks are continuing in Plutonium Inn, Gate to Hel, St. Philippus Church, the ancient theater, necropolis, bath and basilica this year and artifacts from underground are being unearthed. Denizli Mayor Abdülkadir Demir said they were celebrating the 25th anniversary of Pamukkale’s inclusion in the UNESCO World Heritage List.Demir said, “2,500 years ago people came to this thermal source to recover their health. After a certain age, they began living here and were buried here when they died. Each grave is a different size, depending on people’s income. The restoration of the big and important graves here will be finished by the end of this year. The goal of the task is to increase the number of tourists. We will also establish a thermal tourism center in Karahayıt.” The Denizli Museum Director Hasan Hüseyin Baysal said the graves in the Hierapolis necropolis dated back to the 1st century A.D.