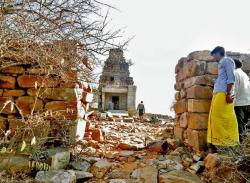 Dwaraka Nagar - The Archaeology and Museums Department has discovered an ancient Sri Venkateswara Swamy Temple at Dwaraka Nagar of Chandarlapadu mandal in Krishna district. The temple, dating to the 16th century A.D., was found when a team led by Assistant Director of Archaeology and Museums Department S. Bangaraiah went to inspect Sri Someswara Swamy temple atop a hill abutting Krishna River at Gudimetla village of Chandarlapadu in Nandigama. “While visiting the Sri Someswara Swamy temple, we noticed a small structure on a hillock and went there only to find an ancient Sri Venkateswara Swamy Temple,” said Mr. Bangaraiah. Unidentified persons had partially damaged statues of ‘Dwarapalakulu’ at the entrance of the main shrine. The lintel beam and ‘kalasa’ portion of the temple were also found broken, while the rest of the structure remained intact. Hanging lotus buds, ‘makaras’ (crocodiles) and floral designs reflect the style of Vijayanagara regime, according to Mr. Bangaraiah. It’s an 80-km drive to the temple from Vijayawada. 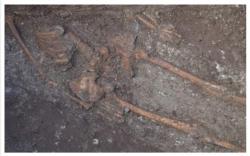 Varna - Archaeologists have found what they describe as the remains of "a huge skeleton" in the Black Sea city of Varna's downtown area.Initial reports suggest the man lived late in the 4th or early in the 5th century.It is "easy" to see that the size of bones is "impressive" and that they belonged to "a very tall man", Valeri Yotov, who is part of the team carrying out excavations there, is reported as telling local news websites. Yotov, however, has stopped short of giving details.The skeletonwas stumbled upon in the area of the wall of the ancient city of Odesos. Yotov suggests the man might have died during while working or during a ceremony held by the walls. His posture, with hands laid on his waist and his body pointing to the east (head) and west (feet) is a clear indication for archaeologists he was buried. Reconstruction works are being carried out in the central area of Varna, Bulgaria's third-largest city dubbed the "Black Sea capital".

Gaochang - A Chinese archeological research institute is about to start work on restoring a pair of 1,400-year-old leather shoes unearthed from the Astana Tombs, the ancient cemetery site in northwest China's Xinjiang Uygur Autonomous Region.Xu Dongliang of Academia Turfanica said the shoes, plucked from the large archive of items excavated from the Astana Tombs since the 1950s, are 24 cm long, with the vamps, uppers and soles separately tailored. They were made of goat skin and the parts sewed together using animal sinew. Academia Turfanica has invited experts from Germany to supervise the restoration work, which is expected to take 20 days. Xu said technicians would use specialist microscopes to analyze the shoes. Using precision techniques, the restoration will remove dirt and mould, and reshape and reinforce the shoes to make them more sturdy. Over 300 leather relics have been discovered in the tombs in present-day Turpan. Academia Turfanica has been heavily involved in restoring the items, most of which are charred, damaged or in a state of deterioration. Archeologists regard the Astana Tombs as a treasure trove of history. The site used to be a public burial place for officials and ordinary people of different ethnic groups in the ancient city of Gaochang. Since the 1950s, the tombs have been officially excavated 14 times. Some 456 tombs and 10,000 valuable relics have been discovered. 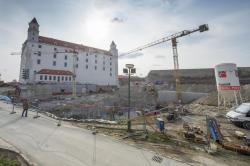 Bratislava - Some 12 hours of discussion on March 17 failed to resolve the future of excavation and construction plans around Bratislava Castle.  Though the expert commission agreed it is important to protect the site and ban construction equipment from the area, what will come of the Celtic architecture found on the site as work on a planned parking garage got underway is still unclear. Parliament, which initiated the construction of the garages, says a final decision will be made after further talks. Experts consider the archaeological site on the northern terrace of Bratislava Castle to be of high quality, and they called for better protection via fencing around the site. They also agreed that the excavations should be exhibited on the site where they were found. The commission subsequently recommended renovating the findings under the castle courtyard and the northern terrace, the SITA newswire reported.

Vat Phou complex - A large 7th century artifact described as one of the most significant archaeological items ever found in Laos has been unearthed at a world heritage site in the country's south, local media reported Wednesday. The discovery was made during archaeological excavations at Phou Kao, a mountain site associated with the UNESCO World Heritage Listed Vat Phou complex in the southern province of Champassak, state-run media Vientiane Times reported. The piece, featuring carvings of figures from Hindu mythology, measures 2.2 meters by 90 centimeters wide. The 22-cm-thick sculpture was located under a 20-cm layer of debris. Sivone Vangkhonevilay, Deputy Director of Champassak Provincial Department of Information, Culture and Tourism, hailed the discovery of the piece, which was likely attached to a shrine gate. "This is considered to be the most special and rare discovery in our country that archeologists have ever made, particularly regarding the historical value of the sculpture." Other smaller items have also been located nearby. Preparations are being made to put the sculpture on public display at the Vat Phou site. According to UNESCO, the Vat Phou Temple complex and surrounding landscape represents a development ranging from the 5th to 15th centuries, mainly associated with the Khmer Empire that later centered on Angkor Wat, near Siem Reap in present-day Cambodia. The site incorporates geometric pattern of temples, shrines and waterworks extending over some 10 km to the banks of the Mekong River and includes Phou Kao mountain and its surroundings. 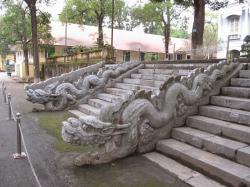 Hanoi - The Ha Noi People's Committee approved the restoration of Thang Long Citadel Complex's Kinh Thien Palace in Ha Noi, which was used for royal meetings under the reigns of the Ly (1009-1225), Tran (1226-1400), Le (1428-1789) and Nguyen (1802-1945) dynastries. The Thang Long-Ha Noi Heritage Preservation Centre and the Viet Nam Archaeology Institute started excavating the Kinh Thien Palace site last February. In recent years researchers have suggested restoring the palace, but they don't have enough information on the building's original architecture and measurements. Most of it was destroyed by the French in 1886. They left behind only the floor and a staircase bordered by two stone dragons. Scientists said that if they received enough support from concerned agencies, the rebuilding could be started within five years, once enough information on the palace's architecture was gathered. Under the recently approved project, scientists will do more research, design a 3D building plan and submit it to the authority by 2016. According to Dai Viet Su Ky Toan Thu (Complete Annals of Dai Viet), construction on Kinh Thien Palace began in 1428 under the reign of King Le Thai To and was completed under the reign of King Le Thanh Tong. The palace is among the most important buildings in the citadel complex and was often used for Le kings' big diplomatic or political events. After October 10, 1954, when anti-French resistance troops took over the city, the site was used as an office for the Ministry of Defence. Last year the ministry gave part of the site to the city's administration. The Kinh Thien Palace relic is an essential part of the citadel. Doan Mon (South Gate) and Ha Noi Flag Pole are positioned in front of the palace. Behind the palace is the Hau Lau Building and Cua Bac (North Gate). The eastern and western sides of the palace are also bordered with walls and smaller gates. The stone dragons at the palace's staircase are considered a special piece of architectural heritage, representing sculpture art of the Early Le period.