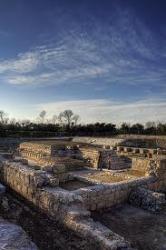 Jinna Wali Dheri - The department of archaeology and museums of Khyber Pakhtunkhwa (KPK) has initiated the final phase for the restoration of the ancient Buddhist stupa and monastery, locally called Jinna Wali Dheri, dating back to the third and the fifth century AD.  The archaeologists, accompanied by PhD scholars from various universities, have begun the excavation to preserve the site and to provide on-the-field training and research facilities at this ancient stupa and monastery, located about 13 kilometres north of the Taxila museum, on the left bank of river Haro.  The most remarkable discovery from the site were the Buddhist mural paintings. This is the site where a hand-made painting on stucco plaster was recovered for the first time in Pakistan’s history.  Dr Naseem Khan, director of the department of archaeology, explained that the excavation of this monastery, spread across 180 square metres, started between the years 2002-2004. Later, this site was excavated and preserved between the years 2007-2010, during which the site was preserved. He said that, however, an area of 90 square metres was left unexcavated. In-charge of the excavation team, Maseehullah Khan Bacha, while talking to Dawn said that although the previous two excavations led to the discovery of a fair quantity of antiquities, like coins of the Kushan dynasty and the White Huns; glass and shell bangles; stones and terracotta beads; earthenware storage jars, bowls and small pots; metal objects including weapons; stucco heads of Buddha and Bodhisattva; along with the remarkable discovery of the Buddhist mural painting, he was confident to discover more antiquities.  He added that the main purpose of the excavation was to completely expose the historical site and preserve it.

ROYAUME UNI – Lunt - The 8,000-year-old secrets of an ancient coastal settlement in Sefton have been revealed. 18 months ago, on a low sandy promontory in the valley of the River Alt, archaeologists led by Ron Cowell, Curator of Prehistoric Archaeology at the Museum of Liverpool, found traces of two substantial buildings measuring between 4m and 6m across. A radiocarbon date from burnt timbers from one of them gave a date of about 5800 BC. Ron Cowell said: ‘What is surprising about the buildings at Lunt is that they use small sand ridges and banks in the landscape as part of the structure, which then extend outwards in curves of post-holes and stake holes. “This makes them appear much more architecturally sophisticated than the more usually found Mesolithic sites which are mostly interpreted as small, ephemeral, temporary camp sites. “Also the Lunt buildings both seem to have multiple phases of use, perhaps at least three. We have not established dates for each of the buildings yet, but it is possible that this site was occupied for quite some time on a repeated perhaps semi-permanent basis. “This could give us some idea of how large some hunter-gatherer groups were. It is suspected that we are probably dealing with only a very small population in the region, in perhaps the low hundreds, who may have been organised in family-based groups and bands. But this gives us our first opportunity to test such ideas against firm evidence.” He added: “We don’t yet know when the site was abandoned but, quite topically, it appears to have been flooded by about 5000 BC and it became too wet to continue living there. After having lain at the bottom of a shallow lake for several hundred years the site was then inundated by the sea as the estuary of the River Alt spread almost as far as Sefton village. The investigations also recovered coarse stone tools and finer worked flint from inside the structures, as well as large amounts of chert stone – not a local material, but one which is likely to have been specially imported from other settlements. “Flint seems to have been hard to come by locally, and the nearest source for chert would have been at least 30 miles away in North Wales or even further away if it came from Derbyshire,’ said Ron Cowell. “Sites like these give us new and surprising ideas that in the world of prehistoric hunter-gatherers, there were places in the landscape that people kept coming back to and perhaps spent much of their lives there.

St Piran - A bottle of beer believed to be more than 100-years-old has been found at an ancient church in Cornwall.  The bottle, still containing some of the beer, was found at St Piran's Oratory, near Perranporth, which is believed to be among the oldest places of Christian worship in Britain. St Piran is the patron saint of tin miners and the phrase 'drunk as a Perraner' also comes from the legend. The beer will be analysed to see what brew was used. A spokesman from St Austell Brewery said it was believed the bottle dated back to 1910 and was found in an "immaculate condition". He added the bottle also had a swastika logo on the cap, a popular brewing symbol at the time.  Archaeologist James Gossip said the bottle was believed to have been left in the sand by a worker in 1910 when the oratory was encased in a concrete structure in an attempt to protect it from the encroaching sand and waves.  The 6th Century remains of St Piran's Oratory are being uncovered in a major archaeological project by the St Piran Trust.  According to legend, St Piran was flung into the sea in the 6th Century by the kings of Ireland who were jealous of his healing powers. Despite having a millstone around his neck, he did not drown - but "floated" across the sea and landed in Cornwall. Each year, St Piran's story is retold in a drama on the dunes near the oratory on the Sunday nearest to 5 March.

- West Knoyle - A skeleton of an Iron Age woman with her feet chopped off has been discovered in a field in Wiltshire.  The remains were found along the A303, near West Knoyle, by archaeologists ahead of a new water main being laid.  Wessex Water said the woman's feet were found "reburied alongside her" along with the carcasses of at least two sheep or goats "on her head".  Peter Cox, from AC Archaeology, said: "We're unsure why - but it must have some link to beliefs at the time." The female skeleton was found alongside the remains of a child aged about 10 and two males with sword wounds to their hips. It was during a pre-work survey of the West Knoyle area that AC Archaeology unearthed the Iron Age burial site. "Human remains from these periods are very rare and indicate the long period of settlement that has occurred in the area," said Mr Cox."But we're unsure why the female skeleton has been found without her feet or why she may have been buried with sheep, but perhaps it was to protect her soul from bad spirits." The bones have been removed from the site and will undergo radiocarbon dating to determine their age. 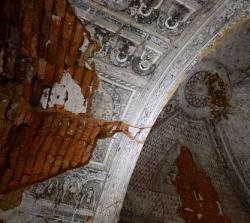 Bagan - Japanese specialists who helped restore murals in ancient Japanese tombs are working with Myanmar to preserve centuries-old Buddhist images at the sprawling Bagan temple complex here.  The site ranks alongside the grandeurs of Angkor Wat in Cambodia and Borobudur in Indonesia.  Of the many thousands of Buddhist temples, pagodas and monasteries constructed between the 11th and 13th centuries, more than 3,000 survive in Bagan. Richly colored murals have deteriorated in many places due to rain seeping into cracks in walls caused by earthquakes and weathering. This has damaged the plaster on which the works were painted. Abeyadana Temple stands in Myinkaba village, a southern neighbor of so-called Old Bagan, the central area of the Bagan archaeological site. Built in the 11th century, the temple is known for its murals themed on India’s Hinduism. A calcium-like white liquid oozing from the ceiling covered parts of the murals. The problem was blamed on past slipshod preservation efforts. 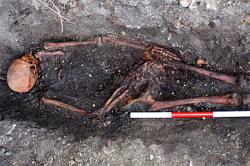 Rat Island - The bodies of four 19th century prisoners have been rescued off the coast of Portsmouth. A team of soldiers injured in Afghanistan, working on the foreshore of an area known as Burrow Island, responded to an emergency call when a member of the public alerted police to human remains exposed by severe weather conditions.  Better known locally as Rat Island, the site has not been used by the armed forces for more than 40 years, despite its position near Her Majesty's Naval Base and the mighty warships of HMS Victory and HMS Excellent. Experts from Wessex Archaeology hope to reveal the age, sex, stature and physical health of the figures, who are thought to have been held by the floating prisons moored in the harbour. 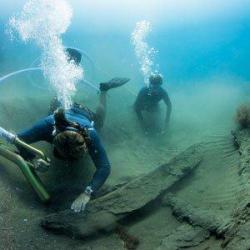 East Sea - Vietnam has not paid appropriate attention to the underwater archaeology at the East Sea. The exploration projects in the area so far just aim to discover sunken ships or arms depots. Prof. Dr. of Science Nguyen Tac An, former Head of the Nha Trang Institute of Oceanography, said in 1992, when he was at work, the institute carried out a lot of contracts on salvaging ships on the East Sea. Some scientific discoveries were made during the process, but they have never been made public.  According to An, Vietnam still does not think of developing the underwater archeology science. This explains other countries are prevailing over Vietnam in the field. There are two main reasons behind this – the limited long term vision, the lack of modern equipments and trained workforce. China has recently announced that its first underwater archaeology ship would be put into operation on the territorial waters around the Vietnamese Hoang Sa archipelago in May 2014. Meanwhile, Vietnam’s underwater archaeology is still in the 3-nos conditions: no workforce, no money and no technical foundation.  In fact, Vietnam carried out the first field work in 1987 already with the river boat at the Bach Dang relic site in Quang Ninh province. However, a specific division on underwater archaeology under the Archaeology Institute has just been set up. According to the Head of the Archaeology Institute Tong Trung Tin, the establishment of the division could be seen as a milestone in the development of the science. From now on, Vietnam would continue its research and training works with an aim to clarify the priceless treasure hidden deep under the rivers and the sea.