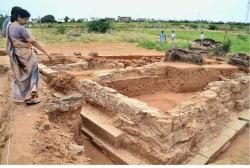 Ukkirankottai - A team of experts from the Department of Archaeology has unearthed a badly damaged portion of a temple and a fort constructed by a famous king of Pandya dynasty at Ukkirankottai near here 1,250 years ago. After stumbling upon a few granite ‘Nandhis’ and a damaged dome of a temple strewn all over a barren land at Ukkirankottai, 26 km from here, a team of experts from Department of Archaeology, led by Deputy Superintendent Vasanthi, camped at the site for about two months and discovered the buried structure by digging a 15-foot-long and five-foot-deep trenches at five places. “The unearthed constructions have proved the presence of a temple, a fort and a few more structures where commanders of Pandya King Paraakrama Veera Naarayanan, popularly known as Ukkirapandian, had stored their weapons and the king’s soldiers were staying,” said J. Ranjit, curator of the department and director of this project. Apart from collecting the proof for the presence of a fort at Ukkirankottai, the team had gathered broken conch and glass bangles, terracotta dolls, floor tiles, granite Nandhis, damaged portion of a Siva temple, pots used for melting metals, etc. “Since melting of metal had been done here, we believe that the weapons could have been prepared here with the molten metals,” Mr. Ranjit said. 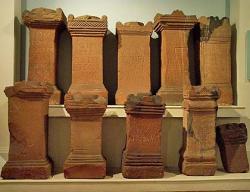 Maryport - This will be the final year of a five-year project which has done much to deepen understanding of “one of the most important Roman cult complexes” at Hadrian's Wall. The eight-week dig aims to explore Roman Maryport’s complex religious landscape and to learn more about the famous altars found at the site, on display in nearby Senhouse Roman Museum.  The majority of the altars, dedicated annually by the commanders of the Roman fort, were found in an 1870 excavation by Humphrey Senhouse. Since then, the five year project, commissioned by the Senhouse Museum Trust and supported by Newcastle University, has done much to develop understanding of the altars. In 2011 the project team discovered that the altars were re-used as the foundations for a Roman timber building or buildings and had not been buried as part of a religious ceremony.  Another complete altar was unearthed in the 2012 excavation, with an inscription by T Attius Tutor, commander of the Maryport garrison, known to have served in Austria, Hungary and Romania during his career. A late Roman/early Medieval cemetery was also found.   In 2013 the team excavated a second century classical temple, the north-westernmost such temple in the Roman world. “By the end of the season we hope to have a detailed understanding of one of the most important Roman cult complexes ever to have been explored in Britain,” added Professor Hayes. Part of the Frontiers of the Roman Empire World Heritage Site, for more than 300 years the Roman fort and settlement at Maryport were a significant element of the Roman Empire’s coastal defences along its north western boundary.

Dun Deardail - Archaeology are to begin excavations at iron-age fort Dun Deardail in Glen Nevis in August. The ambitious Dun Deardail projects aims, over the next three years, to uncover the mystery surrounding the process of vitrification and explore the rich cultural heritage of Glen Nevis by digging deep to uncover the past. The fort of Dun Deardail was probably built in the first millennium BC or first millennium AD, but the fort has not been archaeologically excavated or securely dated. It may have been occupied and perhaps rebuilt on several occasions through time - from Celtic fort through to Pictish citadel. 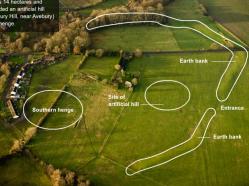 Marden Henge - Archaeologists embarked on a new excavation at Marden this week to investigate the henge and Neolithic life. “Marden Henge is located on a line which connects Stonehenge and Avebury. This poses some fascinating questions. Were the three monuments competing against each other? Or were they used by the same communities but for different occasions and ceremonies? We hope to find out.” Built around 2400 BC Marden is the largest henge in the country and one of Britain’s most important but least understood prehistoric monuments. The excavation also marks the start of the new University of Reading archaeology field school.

Nottingham - Nottingham Castle will be the scene of a major archaeological dig this summer. Professional archaeologists from Trent & Peak Archaeology and from York Archaeological Trust, working in partnership with Nottingham City Council and Historic England, will be on site to excavate an area in the Outer Bailey, near the bandstand and close to the curtain wall overlooking Castle Road. This area has not been excavated before. The dig will run from 13 July to 14 August.  The excavation aims to add to knowledge and understanding of the medieval period in Nottingham. Archaeologists initially expect to find evidence of 19th century gardens and buildings, but it is hoped that deeper layers will reveal evidence of occupation and activities during the Middle Ages, uncovering objects such as pottery and possibly metalwork lost by people living and working during the period. Dr Paul Johnson from Trent & Peak Archaeology said: “Nottingham Castle has always been central to the history of the city; from the Norman Conquest and the Civil Wars, through to civil disturbances in the 19th century, this site has seen a lot of action over the years. For an Archaeologist this means that there is the potential to discover some very interesting evidence that will help us better understand the heritage of the area.” 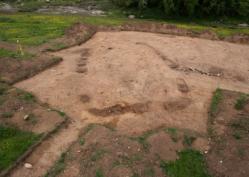 Tullaghoge - House foundations dating back 700 years have been uncovered by archaeologists on a hilltop where Ulster chieftains were crowned. Remains of the homes, thought to belong to the Gaelic O’Hagan clan, were found by the Department of the Environment (DoE) at Tullaghoge in Cookstown in Co Tyrone. The houses are small sub-rectangular buildings marked only by their surviving floors and measure around five metres by three metres internally. They would have had sod or clay walls supporting angled roof timbers known as “crucks”. A fire, set in its hearth at the centre of the house, would have heated the building, with the smoke rising to escape through a thatched or sod roof. Mr Durkan said at least two houses have been found and fragmentary remains of a possible two or three more. Archaeologists suspect many more lie dotted around the hill, forming an O’Hagan farming settlement that supported the elite members of the clan who lived in the fort or nearby on the hill. Tullaghoge is mostly associated with the O’Neill family who were very powerful in Ulster during the medieval and late medieval periods. However, the O’Hagans were the hereditary guardians of Tullaghoge and lived at the site from at least the 1200s until 1602, Mr Durkan added.