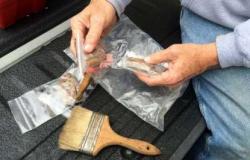 St. Augustine - While working along Charlotte Street in historic downtown St. Augustine last week, crews with the city uncovered bone fragments linked to a historically important church and its cemetery. “The bones that we recovered were associated with people who were buried in the Los Remedios cemetery,” said Carl Halbirt, archaeologist for the city of St. Augustine. “Based on the bones that we have, we know we have both adult as well as possible children.” A dozen fragments surfaced as crews searched underneath the street as part of preparation for utility work. More digging is planned for Charlotte Street. Los Remedios is named for The Nuestra Senora de los Remedios — translated as Our Lady of Remedies. The parish church served St. Augustine from 1572 to 1702. Burned by Sir Francis Drake in 1586, the church was rebuilt but destroyed in 1702 by English and Native Americans. Those buried at los Remedios included high- and low-ranking Spaniards, Native Americans and slaves, said archaeologist Kathy Deagan, research curator of archaeology at the Florida Museum of Natural History.

Sangyuan - Archaeologists advanced their research on the ruins of the Sangyuan brick kiln site by finding another 48 brick kilns and a number of bricks with their makers' fingerprints. The Sangyuan brick kiln ruins in Fuping county, Shaanxi province, is considered the largest brick kiln ruins from the Tang Dynasty (618 – 907), with 495 brick kilns discovered since the early 1990s, according to Wang Xiaomeng, deputy director of Shaanxi provincial institute of archaeology and chief of the excavation team on the ruins in 2015. The brick kilns might have been built in the Tang Kaiyuan period, some 1,300 years ago, for the construction of Tang Dingling, the mausoleum of Tang Zhongzong, who wasalso known as Li Xian (656 – 710), Yu Chunlei, assistant researcher of the institute and a member of the excavation team,said. Tang Zhongzong was the dynasty's fourth emperor.."There were so many brick kilns for the tomb construction because the tomb was required to be completed in a limited time," Yu said. The historical records show that after Li Xian died accidently, the royal family members fought for throne and Li Xian's burial had to be held after the fifth emperor, Li Dan, ascended the throne. With the newly discovered brick kilns, archaeologists also unearthed a number of ancient bricks marked with fingerprints, which were commonly considered to be trademarks to distinguish which worker made which bricks. Yu had his own opinion on the fingerprints, saying that it might be a kind of technology that allowed workers to press the bricks with their hands to make the bricks more solid by forcing the brick material to completely fit the mold.

Gizeh - For the past three months a team of researchers from Egypt, France, Canada and Japan have been scanning four pyramids with thermal cameras to see if they contain unknown structures or cavities. Operation Scan Pyramids began on October 25 to search for hidden rooms inside Khufu — also known as the Great Pyramid — and Khafre in Giza and the Bent and Red pyramids in Dahshur, all south of Cairo. The project is expected to continue until the end of 2016, and applies a mix of infra-red thermography, muon radiography imaging and 3D reconstruction — all of which the researchers say are non-invasive and non-destructive techniques. On Sunday, experts revealed new findings on some of the limestone blocks that make up the western flank of the Red pyramid and northern flank of Khufu. “There is a clear separation of temperature on the west face of Red pyramid. The bottom is colder than the top,” Matthieu Klein of Canada’s Laval University told a news conference. “It’s interesting. We have no answers yet ... Could it be because of the wind? Maybe, but it’s interesting,” he said, adding that the difference in temperature was of three to six degrees Celsius. A video projection of the data recorded by the thermal cameras showed hues of red on the blocks where heat was detected and blue and magenta for the cooler ones. Klein said two anomalies were also located on the northern flank of Khufu, where experts have previously found similar “points of interest” on the monument’s eastern face. Experts say they will carry out more investigations to include further data analysis of the anomalies detected so far.

Alexandrie -  Egypt’s minister of antiquities, Mamdouh al-Damaty, announced plans to move forward with an underwater museum project in the Eastern Harbor area of Alexandria’s Abu Qir Bay. The museum, which has been in the works since 1996, incorporates a design from French architect Jacques Rougerie that features system of fiberglass tunnels on the sea floor. The tunnels will be further connected to an inland building on the Eastern shore of Abu Qir Bay. The tunnels will be 20 feet below sea level and will surround the over 2,500 relics submerged in the area, including massive blocks that are believed to be the remains of the Pharos lighthouse, which stood at 450 feet tall as one of the Seven Wonders of the Ancient World before falling into the bay in the 13th century AD. Another one of the artifacts is what is thought to be the remains of Cleopatra VII’s palace, according to Smithsonian magazine.

Salem - A team of researchers using historical documents and 21st-century archaeological techniques has confirmed the site where 19 innocent people were hanged during the Salem witch trials more than three centuries ago. The site, known as Proctor's Ledge, is a small city-owned plot of woods nestled between two residential streets and behind a Walgreens pharmacy, said Salem State University history professor Emerson "Tad" Baker. Twenty people suspected of witchcraft were killed in Salem in 1692 during a frenzy stoked by superstition, fear of disease and strangers, and petty jealousies. Nineteen were hanged, and one man was crushed to death by rocks. "The witch trials cast a long dark shadow on Salem history," Baker said. The top of nearby Gallows Hill had long been thought of as the site of the hangings, but there was no evidence to support that, Baker said. Proctor's Ledge is at the base of Gallows Hill. To determine the spot, the team looked at eyewitness accounts of the hangings, then used modern-day aerial photography and ground penetrating radar not available a century ago. The team made other interesting discoveries. They determined there probably never was a gallows at the site. More than likely, the executioners tossed a rope over a large tree. Baker also stressed that there is no evidence that any of the victims were buried at Proctor's Ledge — it's too rocky and the soil is too shallow. The city plans to place a marker at the site but also wants to respect the rights of the people who live in the area, the mayor said.

Hephaestia - A major temple with finds dating from two main periods – one in the 7th-6th century B.C. and the second in the 3rd-2nd century B.C – was discovered during an archaeological excavation at ancient Hephaestia on the Greek island of Limnos, according to state broadcaster ERT. The finds came to light near the ancient city’s theatre. Lesbos Antiquities Ephorate Pavlos Triantafyllidis stated that the workings on the archaeological site, funded by the General Secretariat for the Aegean and Island Policy, will continue. He said that archaeological excavations will be carried out at the Kabeira temple on Limnos and the small island of Agios Eustratios, where there is evidence that a prehistoric settlement existed.
http://prehistoricarch.blogspot.co.uk/2016/01/new-finds-at-ancient-hephaestia-on.html

Tripuranthakam  - The famous pilgrimage temple at Tripuranthakam in Prakasham district dated 13th century was built on a Buddhist Pavilion, archaeologists have revealed after finding two pillars in the premises with Buddhist inscriptions dated first century AD. The pillars were found while the temple authorities were digging adascent to the temple complex. Experts opined that the existing temple was raised over a Buddhist site of Satavahana period. Buddhist scholar and archeologist Dr E Siva Nagi Reddy said, “It is surprising to note that Buddhist remains are recovered from the premises of Goddess Bala Tirupura Sundari Temple. Temple authorities were renovating the buttressed compound wall which laid bare foundations of a gopura structure. A number of Buddhist remains were recovered,” The pillars are carved on Planadu lime stone. “They carry the half lotus medallions, a typical Buddhist symbol, with two line Brahmi inscription datable to the first Century AD. With another inscription in Devanagari script is datable to 10th century AD. This reveals that the pillars were used for raising the temple structure,” said Nagi Reddy. There are two Buddhist stupas located at Chandavaram and Dupadu  in close proximity to Tripuranthakam.