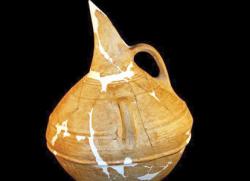 Kütahya - Turkish archaeologists unearthed 1,377 artifacts during excavations in Kütahya province’s Seyitömer Höyük district this year, setting a record for the most cultural assets dug up in one season, according to the project leader. Speaking to Anatolia news agency, project leader Nejat Bilgen said the excavation work has been ongoing since 2006. The excavation area is 25 kilometer from the brown coal area. “This year we have given a total of 1377 artifacts to the Kütahya Archeology Museum,” said Bilgen. “This figure is a record.” There are really significant pieces among the items unearthed this year, he said, adding that among the items, walls erected during the middle Bronze Age were the most important pieces. “The walls are believed to have a very important place in the ancient Anatolian life. “There are also important cult accessories, which we found in a temple from the early Bronze Age,” he said, adding that the team also discovered ancient sculptures.  “In total, we have unearthed 17,748 artifacts in the Kütahya excavations,” he added.  “We have dug through different layers of soil and each layer presents another era,” he added, noting that in the coming years they expect to uncover more remains from the early Bronze Age. There are six cultural layers, Bilgen said. “We are planning to work on this field in the coming years and discover more artifacts,” he said, adding that one of their main goals was to learn how coins from Mesopotamia and Central Anatolia were made.

INDE – Wadali - The history of Gujarat may take a great turn in next few months if the next excavation planned by the state archaeology department at Wadali village near Patan city yields expected results in between December and January. Wadali is a small village on the right banks of River Saraswati, about 7 km west of Patan district town. It has been referred at Vatpalli in Jain literature. It was located on the western limit of the ancient fortified town of Patan. Patan was known as Anhilwad Paten in the early medieval period which got prominence as a capital city of Gujarat under the Solanki dynasty. Tradition has that small village like Wadali had played a major role in the upsurge of Patan. Y S Rawat, director of State Archaeology Department said, “We have submitted a proposal to the central board for approval of excavation at Wadali village near Patan. The site has huge potential and it may also replace Patan as the first developed capital of state. The site has not been excavated before, but the primary investigation reveals that the site has pre-Solanki and Chavda era as well as older civilisation evidences which date backs to the 8th century also. About 40 years ago, remains of Jains temple were discovered by local villagers here. We have planned to start excavation in December after getting approval from the Centre.” “The present proposal aims to understand the archaeology of the early medieval transition period in North Gujarat with the objectives to establish the cultural sequence of the ancient site to understand its growth in relation to the establishment of Patan, to study the site in relation to changing course of the River Sarasvati during different phases of its history and to understand the role of Wadli in the growth of Patan as the early medieval capital of Gujarat,” added Rawat.

INDE – Pune - By may 2012, the three famous forts, Sinhagad, Rajgad and Torna situated in and around the city will soon sport an improved look. The State Archaeology Department plans to spend Rs 4.5 crore on development and restoration of the three forts. At Sinhagad Fort, the department plans to repair the Kondhanpur-Kalyan Darwaja and Pune Darwaza that are broken at various places. Another historical monument to get a makeover is the Torna Fort, located around 60 km from Pune. Here too, the two main gates ‘Binicha Darwaja’ (Bini Gate) and ‘Konkan Darwaja’' (Konkan Gate) will be repaired.  While Binicha Darwaja leads you inside the fort, the Konkan Darwaja takes you to the Budhala Machi. The wall, which is broken at various stretches of the fort, will be made again.

INDE – Vadnagar - Vadnagar (230 48| N; 720 36| E) is located in Mehsana district of Gujarat. Known in the past by various names like Nagara, Camatkarapura, Anandapura and Vrddhanagar, the town is situated at the southern and southwestern edge of a large tank called Sarmistha. It is completely fortified by high walls that are more or less intact. Tradition associates it with the settlements of the well-known Brahmin community of Gujarat, the Nagars. Vadnagar was one of the most important centres in north Gujarat, connecting Rajputana, Malwa, Saurashtra and the Deccan. Chinese monk and traveller Hieung Tsang visited Vadnagar somewhere around 641 A.D. and called it Anandapura. He observed 1,000 Sammatiya monks residing in 10 monasteries there. "Starting from here and covering 700 li (approx 500 metres), we come to O-nan-to-pu-lo (Anandapura or modern Vadnagar). Anandapur is 20 li in circuit; there is no chief ruler and is under Malava. Ten Sangharamanas exist with less than 1,000 priests of the Sammatiya School or Little Vehicle". The Skandapurana has a sub-section called Nagarakhanda, intending to give an account of the Nagar Brahmins and incidentally throws light on the traditional history of this town, supposed to be the original centre of this community. Vadnagar is a key to the understanding of what is called the North Gujarat Settlement Pattern. Also, the town of Vadnagar is an example of historical Indian town planning and architecture. In the recent excavations (in the year 2008-2009) carried out by the Gujarat State Department of Archaeology under the direction of YS Rawat, a Buddhist monastery was brought to light in Vadnagar. On plan it measured about 14.04m x 14.04m. Two additional chambers were added on the west at its north western corner. The monastery had an open central courtyard around which initially nine cells were constructed. To the narrow veranda was added another on the northern side. The veranda was attached to an entrance platform from the north side having two flights of steps from the east and west. Burnt bricks have been used for construction. The sizes of bricks measured 41/42cm x 25/26cm x 6/7cm in length, breadth and thickness respectively. The monastery appears to have been constructed around circa 2nd-3rd century A.D. Around the northeast corner of the monastery two small votive stupas have been uncovered. On plan, one of them is square and the other is circular. The former was constructed in terraced fashion vertically showing three squares in diminishing order from bottom to top. The top was surmounted by a solid dome of which only the base is remaining. According to archaeological stratigraphy these votive stupas were built later say for example around 4th-5th Century A.D. A broken head of Buddha, a votive tablet with foot impression and six-petalled flowers were found along a broken crescent shaped stone toilet tray depicting a scene of a monkey offering honey to the Buddha. Black polished ware shreds inscribed with Brahmin legends like Devshririshi, Shakasya and Dhamma have also been found from the monastery.