Pieria - Scientists believe they are close to tracing the wood from which ancient triremes were made.  The scientists are searching in Pieria (one of the regional units of Greece, located in the southern part of Macedonia, in the Region of Central Macedonia) for the Macedonian fir and the pine tree of Olympus and Pieria, locally known as “liacha.” According to Aristotle’s successor Theophrastus, this tree was used for the laborious process of constructing paddles and ships. Prints on the earth of this particular kind of wood, which has no knots but great resistance to salt water, were discovered during the archaeological excavations that started in 2003 in Methoni of Pieria. This fact, after the announcement of the results of the findings at a scientific conference that took place in Thessaloniki in 2011, mobilized scientists from different sectors in Greece, Los Angeles in the USA, Britain and Ireland, who have ever since been working together to discover pure pieces of wood from the 8th century at the excavation site in Methoni that will continue its work in 2014. 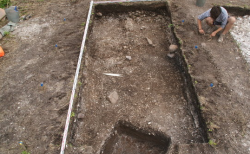 Chuguyevsky - A joint Russian-South Korean archaeological expedition in Russia’s Maritime Territory has discovered a unique burial site of the late Bohai period in the Chuguyevsky District. The early feudal Bohai state existed in 698-926 AD in what is now the Maritime Territory, the Korean Peninsula, and Manchuria. The Bohai culture was known for its iron and metals working skills. Bohai also maintained political, economic, and cultural ties with the neighbouring countries, especially China and Japan.“During the excavations our archaeologists discovered the largest ritual burial site of the late Bohai period in the Far East. It dates to approximately 10th century AD,” Klyuev said. “This is a burial complex built for a very important person; they didn't build such things for ordinary people.” He added that the structure has partially collapsed, and the roof is gone. It is about three metres high, and 10 metres in diameter. The whole complex consists of the main section (the mausoleum), and an upper annex in the form of a pyramid. Parts of the burial site have been destroyed. “The architecture of the building is similar to the typical Bohai style, but there are some interesting distinctive features," Klyuev says. “Building a structure like this was an extremely challenging project at the time; the nearest source of the building materials was 15-17 km away, so the builders had to put in a lot of effort.” The scientist also says that the newly-discovered burial site is unique in many ways. There are somewhat similar structures in China and Korea, but this one is very big and has a distinctive architectural style, so the expedition's discovery is very valuable indeed. Excavations at the site will continue next year.

Thomas Jefferson’s Poplar Forest - Workers chopped up dozens of 150-year-old English boxwoods at Thomas Jefferson’s Poplar Forest on Tuesday, removing shrubs planted by the family that owned the historic landmark after Jefferson’s death. Historians plan to excavate the boxwoods’ roots to learn Jefferson’s design of the ornamental plant layout, which may have featured several kinds of large rose bushes, said Jack Gary, Poplar Forest’s archaeology director. The boxwoods stood in a carriage turnaround circle in front of Jefferson’s summer-retreat home, and originally may have formed a maze inside the center ring, Poplar Forest President Jeffrey Nichols said. Also removed were a few chestnut rose shrubs that added color to the center, and about 40 American boxwoods forming the outer ring of the carriage driveway. Letters and other historic evidence indicate the boxwoods were planted in the mid-1800s by the Cobbs and Hutter families, and probably by Edward Sixtus Hutter’s wife, Emma. 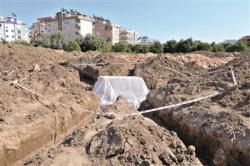 Hurma - A tomb estimated to date back to the Roman period, which was unearthed during digs in the southern province of Antalya, has been taken under protection. The tomb, which was found in the Hurma neighborhood of the city, was covered with nylon and its surrounding was taken under protection. The tomb is estimated to date back to the second and third centuries and it is likely to go on display in the Antalya Museum, pending the decision by the authorities. According to the Provincial Cultural Directorate, the tomb is 22 meters long, 11 meters wide and 72 meters deep. It was made up of a single limestone and has different reliefs on its right and left sides.

USA – Jacksonville - The Southern Oregon University Laboratory of Anthropology (SOULA), in collaboration with the Oregon Department of Transportation (ODOT) and the City of Jacksonville, will return to conduct archaeological excavations at the Chinese Quarter site in Jacksonville. The Jacksonville Chinese quarter was established in the mid-1850s and is thought to be the earliest Chinese quarter in Oregon, making it significant on both a regional and national level. The site served as a vital resource for the thousands of Chinese miners working in southern Oregon in the 19th century. SOULA's 2013 archaeological work at the Chinese quarter site will expand on previous excavations in an attempt to uncover buildings associated with the neighborhood when it burned in the late 1880s.

USA – Saginaw - Investigators have uncovered the remains of a person who may have lived centuries ago, according to a Saginaw County archaeologist. Jeff Sommer, curator of archaeology at the Castle Museum of Saginaw County History, said he and other archaeologists found human foot bones at the site of a Saginaw Castle Museum project that has been ongoing for years. The team stopped digging as soon as they confirmed that the bones were human remains, Sommer said. The remains may be American Indian or a European, he said. "It's a place along the river where people have camped for hundreds of years," Sommer said about the site, adding that most of the materials that have been found there date from 1400 to 1650 A.D., which is "the earliest period of European contact in the area." During the project, archaeologists have unearthed relics from the site in an effort to learn about the people who lived in the area in the past, Sommer said. "It's mostly the debris from day-to-day life, like broken pottery, tool fragments, lots of plant and animal remains," Sommer said. 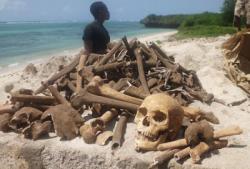 Kijipwa - Kenyan authorities are investigating some 100 human skeletons, including skulls, discovered in Kijipwa village of the Kilifi County in the coastal region, an area believed to have been a holding ground for African slaves before being sent across the Indian Ocean to the Middle East and other parts of the world. Construction workers stumbled on the skeletons as they dug the trenches for the foundation of a new hotel. The official said the skeletons and all recovered artifacts would be subjected to various scientific analyses to determine the age of the fossils and the ruins to help arrive at a conclusion of who the inhabitants were. The skeletons are thought to have been for slaves held at a settlement known in history as Kitoka, which existed more than 1,000 years ago. The ruins of an ancient mosque still stand at the area.