-Huqoq -  The earliest known depiction of biblical heroines Jael and Deborah was discovered at an ancient synagogue in Israel, the University of North Carolina at Chapel Hill announced last week. A rendering of one figure driving a stake through the head of a military general was the initial clue that led the team to identify the figures. The nearly 1,600-year-old mosaics were uncovered by a team of students and specialists as part of The Huqoq Excavation Project, which resumed its 10th season of excavations this summer at a synagogue in the ancient Jewish village of Huqoq in Lower Galilee. Mosaics were first discovered at the site in 2012, and Magness said the synagogue, which dates to the late fourth or early fifth century, is “unusually large and richly decorated.” In addition to its extensive, relatively well-preserved mosaics, the site is adorned with wall paintings and carved architecture. The fourth chapter of the Book of Judges tells the story of Deborah, a judge and prophet who conquered the Canaanite army alongside Israelite general Barak. After the victory, the passage says, the Canaanite commander Sisera fled to the tent of Jael, where she drove a tent peg into his temple and killed him. The newly discovered mosaic panels depicting the heroines are made of local cut stone from Galilee and were found on the floor on the south end of the synagogue’s west aisle. The mosaic is divided into three sections, one with Deborah seated under a palm tree looking at Barak, a second with what appears to be Sisera seated and a third with Jael hammering a peg into a bleeding Sisera.

INDE - Ramanathapuram -  Researchers stumbled upon a 13 AD stone pillar, which reportedly had information on Jewish trade links, in Tamil Nadu’s Ramanathapuram district. “The inscriptions begin with ‘swasti shri’ and mention the boundaries of the land donated to Suthapalli or Ainutruvan Perumpalli,” scholar and Ramanathapuram Archaeological Research Foundation President V. Rajaguru told IANS. He said that Suthapalli is a Jewish worship place and according to the Archeological Survey of India records on epigraphy had mentioned a Hebrew epitaph of a Jewish woman named Mariam at Periapattanam. He also said that based on the writing style the inscriptions apparently dated between 1200-1250 AD. (IANS)

Waterloo - An intact soldier's skeleton has been uncovered on the field of the Battle of Waterloo. It is only the second such set of human remains ever recovered on the site, where charity Waterloo Uncovered has been excavating since 2015. "This year we have returned to excavate on the site of Mont Saint Jean Farm, where in 2019 we discovered three amputated limbs," the charity said on Facebook. "After three years of waiting to investigate the possibility that this might just be the tip of the iceberg, last week our team of veterans and archaeologists discovered an intact skeleton, most likely of a soldier." The battle of Waterloo was fought on June 18, 1815, between Napoleon's French army and a European alliance headed by British commander the Duke of Wellington. The battle ended with Napoleon's resounding defeat, ending France's imperial ambitions and bringing to an end 23 years of ongoing conflict. Most soldiers from the battlefield were likely burned on pyres, or, more gruesomely, turned into fertiliser, Waterloo Uncovered says, making an intact skeleton a find of some historical significance.

Rome - A severe drought in Italy has revealed an archaeological treasure in Rome: a bridge reportedly built by the Roman emperor Nero that is usually submerged under the waters of the Tiber River.  The dropping water levels of the Tiber, which is flowing at multi-year lows, have exposed the stone remains of the Pons Neronianus (Latin for the Bridge of Nero).

CHINE -  Red Deer Cave - Researchers successfully sequenced the genome of ancient human fossils from the Late Pleistocene in southern China, suggesting that the mysterious hominin belonged to an extinct maternal branch of modern humans that might have contributed to the origin of Native Americans.The research behind this discovery started over three decades ago, when a group of archaeologists in China discovered a large set of bones in the Maludong, or Red Deer Cave, in southern China’s Yunnan Province. Carbon dating showed that the fossils were from the Late Pleistocene about 14,000 years ago, a period of time when modern humans had migrated to many parts of the world. Researchers recovered a hominin skull cap with characteristics of both modern humans and archaic humans. For example, the shape of the skull resembled that of Neanderthals, but its brain appeared to be smaller than that of modern humans. As a result, some anthropologists had thought the skull probably belonged to an unknown archaic human species that lived until fairly recently or to a hybrid population of archaic and modern humans. In 2018, Bing Su, PhD, at Kunming Institute of Zoology, Chinese Academy of Sciences, and his colleagues, in collaboration with Xueping Ji, an archaeologist at Yunnan Institute of Cultural Relics and Archaeology, successfully extracted ancient DNA from the skull. The finding also shows that during the Late Pleistocene, hominins living in southern East Asia had rich genetic and morphologic diversity, greater than that in northern East Asia during the same period. It suggests that early humans who first arrived in eastern Asia had initially settled in the south before some of them moved to the north. 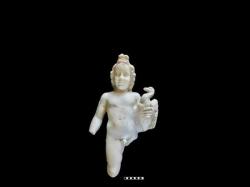 Kourion - Archaeologists working at Kourion have found a sculpture of a young boy lying face down on a mosaic floor in the remains of one of the buildings being excavated there. The excavation of Building 4 is part of a long-term archaeological investigation of the ancient city of Kourion that includes planning of the natural and cultural environment, continued work on materials from the Earthquake House, investigation of soil micromorphology to better understand the history of earthquakes in the area, mapping of the Kourion water system and urban plan, and study of wealth inequality and social dynamics, during the Early through Late Roman period. 2022 excavation season revealed that Building 4 is older than originally proposed, possibly constructed sometime in the 2nd century CE. This earlier date was determined through careful analysis of pottery and sculpture found on the room floors. A sculpture of a young boy was found lying face down on a mosaic floor and covered by large, tumbled wall stones in the westernmost excavated room of Building 4. The sculpture is broken- missing the right hand, the left leg, and both feet. He has wavy hair arranged in a top-knot, and a slightly bulging belly complete with a bellybutton. In his left hand he holds a bird, most likely a duck. This sculpture is similar to one that is currently in the Vatican Museum which is thought to be a Roman variation of a 2nd Century BCE original. This variation was popular during the 2nd century CE, and its presence along with similarly dated pottery found resting on the floor suggests that Building 4 was in use during this time. There is little doubt that Building 4 was inhabited by wealthy individuals. Excavation this season uncovered more imported marble slabs used as revetment and fragments of the painted plaster that once adorned walls. In one of the central rooms of Building 4, the painted plaster fragments appear to form a central panel with leaves and possibly grapes in green, blue and yellow, that is bordered with thick stripes of white, red and black.

ROUMANIE - Dobreni - Several structures were observed in a wooded area near the village of Dobreni, according to Alexandru Gafincu, an archaeologist. In order to establish the age of the tomb, archeologists dug inside the burial mound. They found a rectangular shape put which had a small clay, crumbly pot in one corner. On the opposite side of the pit they identified remnants of burnt human bones, as well as several bronze objects– propeller-shaped needles and a possible shinbone.They also identified the remains of small beads, most likely made of amber. Based on the typology of the bronze pieces, Dr. Diaconu said that it can be said that the  tomb dated back to the 5th-3rd century BC, maybe even earlier. Archaeologists said the discovery will help scientists piece together important information about the funeral customs of the Getae period. Between the 5th and 3rd centuries BC, the Getae were mostly under the rule of the Odrysian kingdom. The Getae provided military services and became famous for their cavalry.

INDE - Gangenahalli - Remnants of a temple built by the emperor of Chola dynasty Rajadhiraja Chola have been found at Gangenahalli, near Kothagere in Kunigal taluk of Tumakuru district. Following reports in a section of media about the temple, built 949 years ago in honour of his father Rajendra Chola, going missing . The team inspected two small temples, once with a Shivalinga and another with a Nandi idol, at the spot. Officials said the foundations of the Chola temple might be lying under the fields surrounding the two small temples, but they were tightlipped about taking up any excavation work at the spot. A stone inscription engraved in old Tamil lying near the temples gives information about the Chola structure. It reads: "The inscription was engraved on the order of Swasthi Shri Udayar Rajadhiraja Thevar. Five years after the death of the emperor Swasthi Shri Udayar Rajendra Chola Thevar, his son Rajadhiraja Thevar, in honour of his deceased father, constructed a Sivan temple called 'Rajendra Choleeswaram'." The inscription also refers to Kunigal as a flourishing and famous commercial capital. Senior historian HS Gopal Rao told TOI, "We found a stone inscription from the 11th century of Rajadhiraja Chola, written in ancient Tamil, and a stone inscription belonging to Hoysala dynasty of the period of king Vishnuvardhana, written in Kannada." He said the team also found traces of a Basadi structure and the head of a Thirthankara idol on the premises. He added the temple, built near the banks of Kunigal Lake, is likely to have been destroyed naturally over time.