Krasnoyarsk - In 2018, while bulldozing a hillock in a cemetery in Siberia, Russia, to expand its grounds, gravediggers unexpectedly unearthed an ancient tomb. Dated to more than 2,000 years ago, the burial chamber houses bronze artifacts and human remains that researchers believe could point to a lesser-known culture. From 2021 to 2022, a team of archaeologists from the Siberian Federal University led by Dimitry Vinogradov excavated the tomb, the first to turn up in the region in about 65 years. They found a vast rectangular pit enclosed by timber and birch bark, with a possible wooden roof likely demolished by the bulldozer. Within the tomb, archaeologists discovered the remains of some 50 bodies, buried alongside an assemblage of artifacts and weapons. It included bronze daggers, knives, and axes, interred alongside ceramic vessels, bronze beads, and a plaque carved in the silhouette of a stag. These are objects that Vinogradov believes were buried with the deceased to aid them in their journey into the afterlife. The characteristics of the tomb and its contents have further led researchers to associate the site with a Scythian culture. Scythian artifacts, then, are certain bronze weaponry, equestrian equipment, and artworks made in the image of real or fictional animals, including griffons, wild felines, and stags. But even with the identification of these features, the field remains divided on the connections that could be drawn between various Scythian cultures and communities. The region in which this latest tomb was discovered, on the outskirts of Krasnoyarsk, also bears significant clues. Based on some 150 other burial mounds that have been identified around the city throughout the 20th-century, archaeologists have posited that the area could have been home to the Tagars during the 2nd- and 1st- centuries B.C.E—a later period of Tagar civilization, which historian Mikhail Gryaznov has suggested should be recognized as the distinct and transitional era, the Tesinian culture. For one, while Tagars would bury their dead individually in stone-walled graves in the earlier phase of their culture, the Tesinian period saw them inter multiple dead bodies, amassed over generations, alongside artifacts such as painted plaster masks in large wooden tombs. The grave would then be sealed off and set on fire. After burning through, it would then be covered with dirt to form a mound or “kurgan.” Based on its findings, the Siberian Federal University team believes the Krasnoyarsk kurgan to have been a family tomb, with the nature and color of surrounding soil pointing to exposure to high temperatures. Around the tomb were also found 10 pit graves, each containing the remains of one or more bodies—another Tesinian funerary custom. 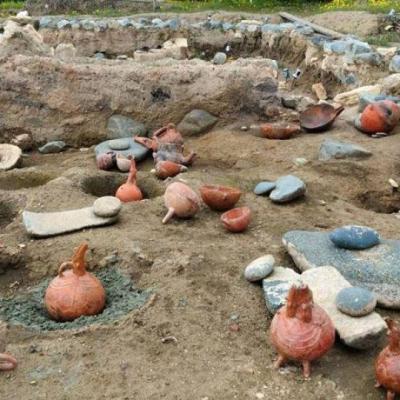 Pyrgos - From 2350 BC to 1850 BC, the Greek population of Pyrgos in Cyprus had a very important industrial building of about 4000 m2, where not only copper but also olive oil, perfume, medicines, textiles, paints, and wine were processed. The world's oldest silk, which predates China's, as well as the world's first perfumery workshop, pharmaceutical preparation lab, and evidence of the processing of metals with olive oil (burning oil for high temperature), which was unheard of in the world 1500 years before the Phoenicians and in which they also used purple dye, were all discovered. One of the most significant sites for the prehistory of Hellenism in Cyprus is the Pyrgos region. By modernizing and deepening research using cutting-edge excavation techniques and archaeometric analysis, we can learn more about the evolution of prehistoric agricultural technologies that shaped and defined the main characteristics of the island as well as its cultural identity. The prehistoric Greek people, who were aware of their cultural heritage, created unique systems for transmitting historical memory as well as pictorial symbols to preserve the memory of their technological heritage. The well-known "Vase of Pyrgos," which employs symbolism to represent the entire wine-making process, was discovered in a tomb in Pyrgos by Pavlos Florenzos, the director of the Cypriot Antiquities Authority, as proof of this system. A realistic picture of the environment and agricultural resources of the time is painted by comparing this pictorial evidence with the data gathered through the analysis of the elements and the archeological sediment, as well as the various systems used to benefit from the agricultural and mineral resources of the island. We have evidence of the agricultural revolution in Pyrgos, modified from the beginning of the Bronze Age through the organization and transformation of prehistoric Greek society, which was based on the relationships and balance between technology and the organization of social life that are significant to the needs, resources, economic exchange, and the differentiation of social and labor classes. Pyrgos/Mavrorachis was acknowledged from the start of the archeological investigations as one of the most significant for the metallurgical investigations of 2000 BC in Cyprus, as well as in the Mediterranean and throughout the world. The ancient city's strategic location at the confluence of several rivers, between copper deposits and the sea, was perfect for metallurgical operations and trade in the second millennium BC. Nevertheless, following eight years of meticulous excavations, we now know that the settlement had a very significant industrial building of about 4000 square meters, where not only copper but also olive oil, perfumes, medicines, textiles, paints, and wine were processed. There was also discovered the world's oldest silk and the first perfumery workshop. There is proof that the world's most distinctive olive oil is related to the processing of metals. The Mediterranean region's oldest silk was discovered here. Italian researchers discovered a tiny fragment that was 4,000 years old and originated in Pyrgos, a village in Cyprus, not China. Only under a microscope can these silk traces, discovered in a terracotta jar, be seen, but Professor Giuseppe Scala of the University of Florence has determined that they are silk fibers from the cocoon of the Lepidoptera tortrix viridens, which once lived in the Aegean islands. Therefore, it wasn't imported from China, as was previously believed, where it was instead exclusively produced using the cocoon of the Bombyx Mori butterfly. The Pyrgos silk was unquestionably produced on the spot by individuals who did not already possess the Chinese technique but instead picked it up by taking advantage of the cocoons.

CHINE - Taohuahe  - A rich collection of artifacts has been unearthed from a large Paleolithic site in Southwest China's Sichuan province, marking a major breakthrough in China's Paleolithic archaeology. Located in Xiangshan township of Suining, the Taohuahe site is composed of two separated areas, with one covering over 90,000 square meters. Preliminary estimates suggest that the site dates back between 50,000 and 200,000 years. Hundreds of stone artifacts such as hatchets and scrapers, and dozens of fossils of deer, cattle, horses and other herbivores, have been unearthed at the site. Archaeologists say the site is clearly stratified, with densely distributed stone tools revealing three consecutive periods of Paleolithic culture. The Taohuahe site was discovered in June 2022 during an archaeological investigation, and excavation work started a month later. Nazca - The Nazca Lines are a group of geoglyphs in the soil of the Nazca Desert in southern Peru. They were made by the Nazca, a distinct archaeological culture from the preceding Paracas culture, having settled in the valley of the Rio Grande de Nazca drainage and the Ica Valley. The geoglyphs were made by excavating shallow trenches in the ground, and removing the reddish-brown, iron oxide-coated pebbles that cover the surface of the desert. This exposes the light-coloured clay and lime earth, contrasting against the surrounding land surface to reveal distinct patterns only visible from the air. In recent years, archaeologists from the Yamagata University have been conducting a field survey of the Nazca Lines using high-resolution aerial photography and drones. The researchers are convinced that the Nazca lines were used as an ancient form of communication in the Nazca Desert. The linear types were used to travel from one valley to another, while the relief types (that depict animals, birds and various figures), tend to be drawn on slopes alongside ancient pathways. Due to this, the researchers suggest that the figures marked the routes for communication between settlements. The team from Yamagata University also recently discovered 168 geoglyphs that date from between 100 BC and AD 300. This adds to 190 geoglyphs discovered between 2004 and 2018, leading to the creation of an archaeological park in the Aja area in 2017 by the Peruvian Ministry of Culture.

ANGLETERRE – Upton Lovell  -A 4,000-year-old polished stone goldsmith’s toolkit has been discovered in a grave next to Stonehenge . Polished stones found near Stonehenge may have been part of a 4,000-year-old goldsmith’s toolkit, say experts quoted by the Daily Mail. Archaeologists from the University of Leicester found traces of gold on their surface, indicating that they were once used as hammers or anvils for working metals. For this purpose, the scientists applied the modern method of “microwear analysis”, examining the surface of the stones with powerful microscopes and thus registering the remains of gold on them. The artefacts were buried in a Bronze Age grave in the Wiltshire village of Upton Lovell and were first discovered in 1801. Two people were laid in this burial mound and are believed to be a shaman and his wife. The scientists came to this conclusion because one of the sets of skeletal remains was dressed in “lavish costume,” including a ceremonial cloak, beaded necklaces and pieces of processed animal bone.The man buried was a highly skilled craftsman who specialized in making gold objects. His ceremonial cloak, decorated with pierced animal bones, also suggests that he was a spiritual leader and one of the few people in the Early Bronze Age who understood the secrets of metalworking. The burial mound dates to between 1850 and 1700 BC and is located on top of a ridge overlooking a river valley that leads to the Stonehenge monoliths. Gold was first identified on one of the stones in 2000, suggesting they were once used to hammer the precious metal into sheets. A further four artefacts were also found with traces of gold found to be prehistoric and with impurities consistent with UK Bronze Age goldware. The discovery adds weight to the idea that this shaman was known for his metalworking skills as well as his spiritual connections. That’s why his community felt it was important to bury him with his personal metalworking tools, scientists believe.