- GRECE – Athènes - Renovation work on the aged Piraeus-Kifissia electric railway (ISAP) on the stretch between the central Athenian neighborhoods of Monastiraki and Thisseio have brought to light one of the most exciting archaeological discoveries of recent years. 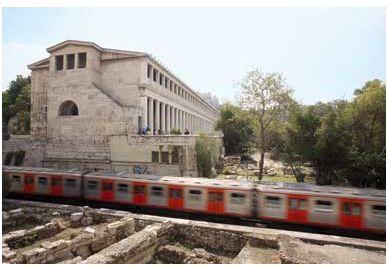 Archaeologists believe that remnants found during construction in the area of the Ancient Agora, on the northwestern slope of the Acropolis, belong to the famed Altar of the Twelve Gods, one of Athens’s most ancient monuments and a landmark that marked the very center of ancient city, from which all distances were measured -- like an ancient Syntagma Square, which marks the starting point in terms of street numbers. The find has created a lot of excitement among Greek archaeologists, who believe that it will change the map of Ancient Athens as we know it. “Thucydides mentions only a handful of monuments in his historical works,” explained archaeologist Androniki Makri. “Of these, even fewer have actually been found and they are located in the archaeological sites surrounded by the mass of this densely built city. If I had to say what kind of attitude we, all Greeks, should have toward these monuments, I would obviously answer that we should be guarding and protecting them, promoting them and showing them off in any way possible.” The Altar of the Twelve Gods (a small section of which is visible in the Ancient Agora) is almost completely buried under the lines of the ISAP train. According to the archaeologists they are 100 percent sure about the identity of the find, because the altar is one of the Athenian monuments that have been described the best in the relevant literature. According to Thucydides, the Altar of the Twelve Gods was founded during the tyranny of Peisistratus by his grandson of the same and son of the tyrant Hippias in 522-521 BC, It marked the very center of the ancient city. The Altar of the Twelve Gods was partially destroyed during a Persian raid in the 480-479 BC period and was not rebuilt until several decades later, as evidence found during the excavation of the Ancient Agora, including worn stones and seashells believed to date to the fourth quarter of the 5th century BC, suggest. Closer to modern times, in 1891, when the Athens-Piraeus electric railway was being constructed, only a very small part of the Agora has been excavated and very few of its monuments were brought to light. At the time, neither archaeologists nor the contractors had any idea which relics were are risk of being destroyed in the process of construction and so they failed to take any measures to prevent any damage.

- INDE – Varanasi - What the mighty Mughals could not, UP's bureaucracy and people have achieved with horrifying ease. In the 17th century, when the Mughals went ransacking and destroying all temples in and around Varanasi, the ancient Kardmeshwar (Shiva) temple and its pond somehow remained unscathed. Situated on the sacred Panchkosi pilgrimage route in Kandwa village, the temple and its pond are now giving in to utter official disdain and public neglect.  While the temple's stone structure with beautiful carvings and images is facing gradual decay, the beautification of pond done at the cost of lakhs of rupees is also not visible to the eye. The entire surrounding is marred by unsanitary and unhygienic conditions with waste scattered all along and damaged fencing. The authorities concerned just shift the responsibility to one another exposing the truth of their work culture. According to Rana PB Singh, professor of cultural geography and heritage studies, Banaras Hindu University, the Kardmeshwar temple presents an example of successive layers of growth, beginning from the 6th-7th century to the 13th century. In the southern part of the platform, there are fragments of the ancient shrine which include images of divine dancers, musicians, snakes, and mythical beasts. These figures date back to the 6th-7th century. During the period of the Gahadvala dynasty (12th-13th century) most of the upper parts were built. It is the only surviving temple after the Mughal destruction of the 17th century. Its location at that time in a forest-clad area at a considerable distance from the city saved it from destruction. Since then, additions and modifications have been made.

- PEROU – Nazca - Nasca ancient geoglyphs are found in the pampas, but they may be found along Rio Grande basin, too, said archaeologist Alberto Urbano, officer in charge at Nasca Regional Directorate of Culture. Urbano alleges that this hypothesis has emerged after the recent finds of two high relief figures and 138 line centers discovered by a team of researchers at Japan’s Yamagata University. Japanese researchers were assisted by  Peruvian Jorge Olano and , all together carried out a research study in this southwest sector of the pampas in Cacahuasi area. Such a project was completed in late January. The observed area belong to the Paracas culture, the specialist told Andina news agency. With regard to the above mentioned line centers, Urbano explained that “they are small hills, mounds or distribution lines”, which may be related to the figures. On the other hand, he urged Ica authorities to monitor Nasca pampas situation in view of the current rainy conditions, which can cause some overflows.