Texel - Marine archaeologists working off the coast of Holland have recovered a remarkable trove of well-preserved artifacts from a ship that sank nearly 400 years ago. Among the items is a beautiful silken gown that likely belonged to royalty. Back in August 2014, divers from the Texel Diving Club discovered an unassuming bundle at the site of a known wreck buried in the sands at the bottom of the Wadden Sea. It wasn’t until they brought the package to the surface that they realized what they had found: a trove of incredibly well-preserved antique textiles. This veritable time capsule had been locked in sand for nearly 400 years, immune from the damaging effects of oxygen and marine animals. Archaeologists from the Kaap Skil Museum in Holland have been analyzing the contents ever since. Museum officials only disclosed these findings to the public this week in order to protect the site from would-be interlopers. The extraordinarily well-preserved gown, or frock, is made from silk damask. It features a bodice with loose-fitting sleeves and sleeve caps, and a full pleated skirt which is open at the front. Its style is reminiscent of those seen in paintings from the early 17th century. A leather-bound book was also found in the bundle carrying the coat of arms of the British king Charles I. This suggests that some of the cargo may have belonged to the Stuarts family of England. The bundle also contained a jacket, silk knee socks, and silk bodices woven with gold and silver thread (definitely not for every-day use). All the garments were the same size, which suggests they all belonged to one woman, who was apparently rather full-figured. Other items included a comb for lice, Italian pottery, pomanders (spheres with pleasant-smelling contents to offset foul odors), and a bunch of leather-bound books, some with locks.

Dunnicaer - Archaeologists have begun a second excavation at a Pictish fort on top of a sea stack in Aberdeenshire, which is believed to be Scotland's oldest. The sea stack - known as Dunnicaer - is south of Stonehaven, near the historic Dunnottar Castle. The original "exceptional" fort discovery by the University of Aberdeen was revealed in April last year The team is now opening up further trenches in the hope of discovering more about the lives of Pictish people. They have unearthed pottery, polished stones and more floor layers.

Dunster - Plans for new building work at the historic Luttrell Arms Hotel in Dunster have led to the uncovering of "probably the largest and most significant" archaeological site in the medieval town. The archaeological excavations in the beer garden include stone walls still standing up to a metre high, a cobbled carriage drive and what archaeologists believe is a malting kiln for drying germinated barley malt. But the viewing could only be brief, as work goes on and the site becomes less clear by next week, until it is gradually all handed back for building work at the 15th century building to carry on. 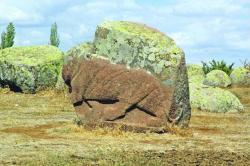 Sorgun - Archaeologists have been working to solve the mystery of five-ton lion sculptures recently found in a field in Sorgun, a town located in the Central Anatolian province of Yozgat. Two researchers employed by the Culture and Tourism Ministry have made preliminary searches in Sorgun’s Yeniyer neighborhood, where they say a field served as a sculpture atelier in the Hittite era. Now it is expected that the field will turn into an open air park museum, shedding light on a period of Turkey’s ancient history. Yeniyer Mayor Osman Yilmaz stated, “It is not exactly known why these lion sculptures were created. It is estimated that they were made between 1,400 and 1,200 B.C. during the era when the Hittites ruled Anatolia. … The top part of their head is a bit higher than their neck. It is thought that these sculptures were dedicated to a holy water source.” Large rocks in a stone pit, the biggest of which is in two-meter diameter, have also been found in the field, further complicating the mystery. Commenting on the sculpture’s possible purpose, Yılmaz said, “Research done around Karakız [a Yeniyer neighborhood] show that the region was a Hittite settlement when these sculptures were created. On the other hand, due to the gigantic size of the lions, it was not much possible to make them in another place and move them here.”

İzmit - Archaeologists in the northwestern province of İzmit have been searching for the head of a female sculpture, which was found a few days ago. The two-meter sculpture was found during drainage works in a field, which had served as a car parking area in the past, and was taken under protection by the Kocaeli Archaeology and Ethnography Museum. It is estimated that the headless sculpture dates back to the Roman era 2,000 years ago.  Kocaeli Provincial Culture and Tourism Director Adnan Zanburkan said examinations by archaeologists were continuing on the sculpture and work had been initiated to locate its head.  “The area is rich in terms of archaeology. Every year we make expropriation work there and carry out excavations. Our primary goal is to reveal the remnants of the ancient city of Nicomedia. We receive great demand from archaeologists to search the field,” he said.

VĩnhLộc - The excavation, carried out by experts from the Viet Nam Archaeology Institute on a total area of 2,000sq.m at the canal area north of Ho Citadel, will last until August 15. Objects unearthed during the excavation will be preserved by the Ho Citadel Heritage Conservation Centre. The centre will then propose methods to preserve the objects to the Minister of Culture, Sports and Tourism. After the excavation, the local department of Culture, Sports and Tourism and the institute will report the results to the Department of Cultural Heritage. The Ho Dynasty Citadel was Viet Nam’s capital under the Ho dynasty (1398-1407). Located in VĩnhLộc District, the citadel measures 870m by 883m and was built in 1397. It is the only citadel in the country built entirely of stone and remained nearly intact throughout the nation’s history. It was recognised as a World Cultural Heritage Site by UNESCO on June 27, 2011. According to experts, the structure is an outstanding example of a new style of construction for a Southeast Asian imperial city.

Zhao'an - Well-preserved human skeletons estimated to be about 4,500-years-old have been unearthed from a graveyard in southwest China's Sichuan Province, the local archaeological department said Sunday. The graveyard was discovered on the site of a prehistoric city in Zhao'an Village, Dayi County, according to the Cultural Relics and Archaeology Research Institute of Chengdu City, capital of the province. The numerous tombs are densely distributed and different burial methods are apparent, Zhou Zhiqing, director of the archaeological team working on the ruins, said, noting that it was the earliest and most complete graveyard of its kind found on the Chengdu Plain. "The skeletons found were well preserved as they were beneath ground-water level and were cut off from air," Zhou said. The find will help with research on neolithic people, such as into health, nutrition, oral diseases and diet composition and so on, according to Zhou. The skeletons will also provide evidence for research on neolithic population, pathology and DNA test analysis, Zhou added. In addition, many cultural relics were also unearthed from the site, including stone ware, pottery and two ivory bracelets, according to Zhou. Zhou said the new findings will provide materials to aid China's archaeological research on culture resources and development along the upper reaches of the Yangtze River during Late Neolithic Age.