Bornholm - A 2,000-year-old bronze and enamel clasp has been unearthed south of the town of Nexø on the island of Bornholm. Shaped like an owl, the bronze and enamel button has large orange eyes and colourful wings.“There are very few of these types of buttons,” said archaeologist Christina Seehusen from Bornholms Museum. “It is likely that someone travelling to the island carried it there.” The owl was produced in regions along the Roman frontier that ran along the Danube and the Rhine at the time, so it may originate from ancient Cologne or another nearby town. The clasp was usually worn by men to hold their cloaks closed, so it is possible that a man from the island was a Germanic mercenary in the Roman army and brought the owl back to Bornholm with him. Bornholm is located far out in the Baltic Sea, but the island was not isolated during the Iron Age. “There have been a number of discoveries in graves and settlements on the island that show there was contact with many parts of the world including frequent contact with parts of the Roman Empire,” said Seehusen. Very few of the owl clasps have been found throughout the world. The Bornholm find was made by Kim Lund-Hansen and Michael Møller, who were using metal detectors to help Bornholms Museum explore an area outside of Nexo on the southeastern part of the island. The remains of a large building dating from between the 1st and 4th century AD was found in the area. 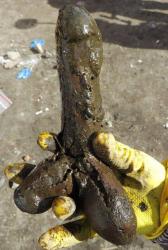 Gdansk -A 250-year-old sex toy has been found by archaeologists during a dig of an ancient toilet in Poland. The eight-inch leather dildo with a wooden head was discovered during an excavation at an old school of swordsmanship in the coastal city of Gdansk. A spokesman for the Regional Office for the Protection of Monuments in Gdansk, said: 'It was found in the latrine and dates back to the second half of the 18th century. 'It is quite thick and rather large, made of leather and filled with bristles, and has a wooden tip that has preserved in excellent condition. It was probably dropped by someone in the toilet. Archaeologists at the site earlier discovered old swords leading them to suspect that the place was once a school of swordsmanship.

ROYAUME UNI -  Navenby - Fears are being raised important archaeology beneath the ground could be lost if a 78-home development in one of the county's picturesque cliff villages goes ahead. The village, which is around 10 miles south of Lincoln, lies in Ermine Street, one of Britain's most important Roman roads. The High Dyke has particular archaeological interest. Archaeological digs there have previously discovered evidence of later Roman occupation, with a 2009 excavation suggesting there could have been around 300 properties in the town, including houses and shops.

Nunavut - The emphasis was on history, but the message was clear: the Arctic is Canada’s park and HMS Erebus its playground.   Parks Canada live streamed an underwater exploration of the Erebus wreck in Nunavut Thursday at the Royal Ontario Museum in Toronto. President of the Treasury Tony Clement called the discovery of HMS Erebus – one of two ships from the ill-fated 19th century Franklin expedition last September – a “swashbuckling tale of mystery.” 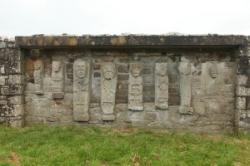 -  A new website has been launched by the Minister for Arts, Heritage and the Gaeltacht, Heather Humphreys T.D., that features 3D images and models of some of Ireland’s most famous heritage sites and ancient monuments. www.3dicons.ie is funded under the European Commission’s ICT Policy Support Programme, and aims to provide the European Cultural Portal ‘Europeana’ (www.europeana.eu) with 3D models of architectural and archaeological monuments of remarkable cultural importance. The monastery at Sceilg Mhichíl, the passage tomb at Newgrange and the Poulnabrone dolmen are among the ancient structures which have been scanned using cutting edge 3D technology, to produce highly detailed models, images and videos. 3D digital models have been produced of over 130 buildings and monuments. 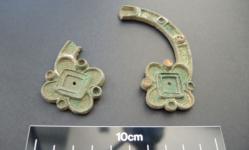 Fife - An amateur metal detectorist unearthed a rare Pictish brooch from farmland in north-east Fife. The 8th or 9th Century piece of jewellery, reckoned to be silver, has caused excitement in archaeological circles, with the find considered to be of national importance. The condition is very good. It is missing a section but the amber inset and gilt have survived and to be able to see the decorative knotwork without it being too worn is quite interesting.” While it is the only object of its type to be found at the location — which is being kept under wraps to keep treasure hunters away — there are similar pieces in a hoard found on St Ninian’s Isle in Shetland.

Pavlikeni- The only known Ancient Roman ceramic factory in Southeast Europe, which is located near the northern Bulgarian town of Pavlikeni, will be restored as part of a project for the promotion ofcultural tourism funded by the Norwegian government. The Ancient Roman ceramic production center near Pavlikeni is located on a plot of 139 decares (app. 34.3 acres). It was part of the villa estate of a Roman military veteran, and is dated to the end of the 1stcentury AD. “At the beginning of the 2nd century they started ceramic production. What emerged here was like a ceramic factory since we have discovered so far a total of 52 furnaces for baking household andconstruction ceramics. The produce made in these furnaces was traded within a wide region,” explainsKalin Chakarov, an archaeologist from the Pavlikeni Museum of History, as cited by Bulgarian TV channel News7. The Ancient Roman villa estate with its ceramic factory was destroyed at the end of the 2nd century AD in a barbarian invasion by the Goths.