Tulum -  A prehistoric human skeleton has been found in a cave system that was flooded at the end of the last ice age 8,000 years ago, according to a cave-diving archaeologist on Mexico’s Caribbean coast. Archaeologist Octavio del Rio said he and fellow diver Peter Broger saw the shattered skull and skeleton partly covered by sediment in a cave near where the Mexican government plans to build a high-speed tourist train through the jungle. Given the distance from the cave entrance, the skeleton couldn’t have gotten there without modern diving equipment, so it must be over 8,000 years old, Del Rio said, referring to the era when rising sea levels flooded the caves. “There it is. We don’t know if the body was deposited there or if that was where this person died,” said Del Rio. He said that the skeleton was located about 8 meters (26 feet) underwater, about a half-kilometer (one third of a mile) into the cave system. Some of the oldest human remains in North America have been discovered in the sinkhole caves known as “cenotes” on the country’s Caribbean coast, and experts say some of those caves are threatened by the Mexican government’s Maya Train tourism project.

PHILIPPINES –  Pilanduk Cave - New discoveries proving the human occupation of Pilanduk Cave in Palawan 20,000 to 25,000 years at the height of the last ice age were unearthed by a team of archaeologists. This led to the discoveries of “new radiocarbon dates that securely place the age of human occupation of Pilanduk Cave at the LGM (Last Glacial Maximum)/Last Ice Age at ca. 20,000-25,000 years ago and evidence for shifting foraging behaviors (ecological and behavioral flexibility) of modern humans occupying changing tropical environments (climate and environmental changes) across ca. 40,000 years on Palawan Island,” Ochoa said. New data and evidence for specialized deer hunting and freshwater mollusc foraging were also gathered during the re-excavation, as well as fossils for a tiger and remains of other native mammal and reptile fauna of Palawan. According to Ochoa, the site has a large and well-preserved archaeological assemblage of faunal material, which are vertebrate remains and shells/molluscs, as well as lithic materials or stone tool assemblage.

Esna - Archaeologists discovered a cache of coins dating from the reigns of several Islamic rulers, along with parts of the coin molds used to mint them and a large weight that would have been used to weigh them. This is an important discovery because it suggests the existence of a coin minting workshop in the area, which the team, dispatched by the Supreme Council of Egyptian Antiquities, is currently trying to locate, said the secretary general of the Council, Mostafa Waziri, in a statement. The coins were found in the town of Esna, about 55 kilometers south of Luxor, on the west bank of the Nile. The current haul includes a gold coin dating from the reign of Al Muizz li-Din Allah Al Fatimi, a Fatimid ruler whose name was given to one of Cairo’s most famous streets. 286 silver coins were also uncovered, dating from the reign of 19 different kings and sultans of the Mamluk period (1250-1517).But that is not all. Many foreign coins were also discovered, such as an Armenian coin minted during the reign of King Levon II, contemporary with the Mamluk period, as well as a group of bronze and copper coins from the Ottoman period.

AFRIQUE DU SUD - Kruger National Park - Artifacts found at a relatively new archaeological site along the Letaba river in The Kruger National Park indicate that humans once occupied the area about 1,500 years ago. The last 2,000 years of South Africa is the period that we associate with the arrival of black African people into the area… in the early iron age. This is evidenced by the discovery of artifacts that date back 1,500 to 1,000 years ago, before the discovery of artifacts in Mapungubwe, where the oldest form of human life was found.The pieces discovered in the area include clay pots, metal, hunting bows and arrows, remains of burnt clay houses, animal bones, marine shells, and glass beads dated through carbon radio dating.  Before European colonisation, these artilects are believed to have been used for trade with travellers from India, the Arabian Peninsula, and China, among other countries. another indication of early life is the discovery of food such as sorghum, beans, pumpkin seeds and livestock remains such as cattle, sheep, goat, and mostly bones of wild animals. When some of these resources were depleted, the settlers moved elsewhere.  The people probably moved elsewhere as resources are depleted, as the environment changes. At some stage, it got drier, so the natural environment wasn't healthy anymore due to malaria and tsetse flies. People also moved to where they could get a better connection to trade routes. Earliest form of glass beads found in South Africa but originate elsewhere overseas. These are one of the objects used in early trade.Tip of bow and arrow hunting equipment used when hunting for large animals. It potentially had a metal tip or poison on the tip. The object is also believed to be over 2,000 years old. Animal bones excavated from the site may have belonged to cattle, and buffalo. These animals were possibly lured into pit traps for food, tusks, or their skin.

Vinoř - Archaeologists are investigating a 7,000-year-old so-called roundel (known as ‘rondely’ in Czech), and monumental structure located in the Vinoř district on the outskirts of Prague. The ancient Neolithic structures’ function is still unknown, but scientists are hopeful that more research will clarify why the monumental structures were built and who and how they were used. The circular ditches usually number between one and three, or very rarely four. The whole structure reaches an average of between 30 to 240 meters, but you most commonly find them in the range of 60 – 80 meters. Perhaps I should emphasize that these ditches are usually around one and a half meters wide, but we know of ditches up to fourteen meters wide and six meters deep,” Jaroslav Rídký from the Institute of Archaeology of the Czech Academy of Sciences. Despite these findings, it is still not clear what function these structures have served: One of such theory is that it could have been used as an economic centre, a centre of trade. It could also have been a centre of some religious cult, where rites of passage or rituals connected to the time of year were performed.

Sindhudurg - The cave, located around 10km (six miles) away from Koloshi village in the Konkan region of western Maharashtra, was discovered by a group of researchers last year. Excavations earlier this year revealed several stone tools in the cave that date back tens of thousands of years. The cave, which is situated in a secluded forest in Sindhudurg, was discovered by researchers who were studying rock carvings in nearby areas. Excavation work was conducted in two rounds, during which archaeologists dug two trenches inside the cave. Several big and small stone tools dating back to the Mesolithic period - also called the middle stone age - have been found."The microliths, or the small stone tools, date back to around 10,000 years, whereas the larger tools could be around 20,000 years old," says Rutivij Apte, who has been researching the Konkan petroglyphs and was part of the excavation team. Dr Parth Chauhan, an archaeologist, says chemical processes are used to analyse any residue that might be present on the edges of the artefacts. This can help determine what the object was used for. "It will take a couple of months to find out the exact time period these stone tools belong to. But right now, we can say that these artefacts are between 10,000 to 48,000 years old."Maharashtra's laterite-rich Konkan plateau where this cave was discovered is also a treasure trove of prehistoric art. In the past explorers have discovered rock carvings of animals, birds, human figures and geometrical designs hidden under layers of soil in several villages here.
So far, 1700 petroglyphs - or rock carvings - have been found at 132 locations in 76 villages in Sindhudurg and nearby Ratnagiri district.
https://saudigazette.com.sa/article/625041/World/Asia/Stone-Age-tools-found-in-India-cave

Bathonea - In a historic first, a writing set dating back over a millennium and a half, to the age of imperial Rome, has been unearthed in a suburb of Istanbul, a Turkish university announced. The archeologists unearthed the 1,600-year-old writing set from the late Roman era during ongoing .archaeological excavations at the ancient site of Bathonea. The writing set – including a miniature vessel, a bone dip pen, and an inkwell – is believed to have once belonged to a merchant. The discovery goes down in the history of archeology as the first time an intact writing set has been unearthed at an ancient dig. Close examination of the inkwell found traces of ancient red and black ink still present. Red ink was used exclusively by state officials and courtiers at that time, according to experts. Considering that the use of writing was quite rare 1,600 years ago, the significance of the discovery grows more evident. During the same excavations, archeologists also found evidence of an earthquake that rattled the city and caused the complete collapse of the famed dome of Hagia Sophia in the year 557. The renowned dome suffered several partial collapses over the centuries. 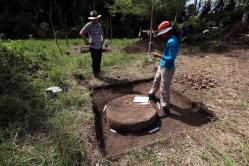 Sak Tz’i’ - A fortified Maya settlement thought to be the capital of the Sak Tz’i’ dynasty is being investigated on private land in southern Mexico by a team of researchers including Charles Golden of Brandeis University. The site is thought to have been occupied as early as 750 B.C. until the end of the Classic period, around A.D. 900. Golden said that the ruins cover about 100 acres and include an acropolis dominated by a 45-foot-tall pyramid, temples, plazas, reception halls, a palace, ceremonial centers, and a ball court measuring about 350 feet long by 16 feet wide. Inscriptions from other sites had linked the kingdom of Sak Tz’i’ to the Maya cities of Piedras Negras, Bonampak, Palenque, Tonina, and Yaxchilan. A two-foot by four-foot wall panel recovered at the site, dated to A.D. 775, records the names of rulers, battles, rituals, and a creation account of a flood and a water serpent that may relate to the construction of the city. “The stories touch on the community’s relationship to the surrounding natural environment,” said team member Andrew Scherer of Brown University. “The area is thick with streams and waterfalls and frequently floods.”