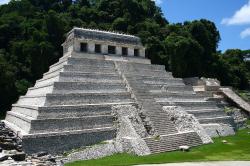 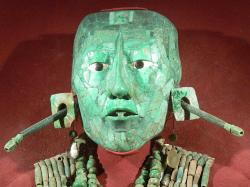 Palenque - Researchers in Mexico say they have decoded the hieroglyphic name on the Palenque tomb of ancient Mayan King Pakal, revealing it to read "The House of the Nine Sharpened Spears", more than sixty years after the crypt was discovered. Mexican archaeologist Alberto Ruz Lhuillier discovered the burial crypt in 1948 and new research into the jaguar, a sacred animal for the Maya civilization, led Guillermo Bernal, from the National Autonomous University of Mexico (UNAM), to make a link with other hieroglyphics of the same form. "This is a name linked with war and an aspect which was not previously known as the hieroglyphic (could not be) deciphered until now," Bernal, from UNAM's Mayan Studies Centre, told a news conference in Mexico City on Monday. "'The House of the Nine Sharpened Spears' is a denomination represented by the nine warriors in the walls of the tomb." Born in the seventh century, King K'inich Janaab' Pakal is said to have ascended to the throne aged 12. He led a prosperous government in the ancient city of Palenque and is believed to have been behind the building of its finest architecture. "This expression is more commonly seen in the classical period, specifically in the eighth century between the years 700 CE to 800 CE, which is the last century of the Mayan culture and very close to its collapse," Bernal said. "In the years following 800 CE, the Mayan cities started to collapse. That (event) has a strong relationship with the frequency of the number of wars which began in this century." The Maya civilization, which developed hieroglyphic writing, a calendar and astronomical system, reached its peak of influence between AD 250 and 900, extending its reach over what is now Guatemala, Belize and Honduras. 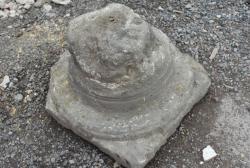 Lincoln - he base of a Roman colonnade which could have formed part of a temple off Lincoln High Street has been found by archaeologists. Measuring about 12 inches in diameter and six inches high, the artefact was found during a dig on the site of the former Gadsby's art shop. And in the past week, the circular structures of what may have been a well and a food larder, both made from limestone and possibly from the medieval era, have been revealed to 21st century eyes. Archaeologists from Saxilby-based Pre-construct Archaeological Services are digging before the new East-West Link Road project reaches the High Street end of Tentercroft Street. As reported in the Echo, a wall, believed to be 12th century or earlier, has been found four ft beneath the modern day street level, followed by a second separate wall with Victorian, medieval and Roman layers. And shards of green glazed pottery typical of the medieval period have been rescued from the muck. Initial thoughts are that the first wall may have formed part of a roughly-built house for workers, probably standing behind a much grander house or shop fronting the High Street. 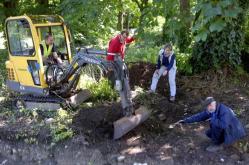 Fryston - The Finding Fryston project has begun an archaeological dig in the grounds of Monk Fryston Hall, giving people chance to discover the past from the Monks to the Victorians. The site's director of archaeology Simon Tomson said: "This site is really productive and offers something for everyone; a safe space to work, a long period of history to unearth, puzzling questions to answer as artefacts and structures emerge." The grounds are now being prepared and the excavation trenches opened in readiness for the dig volunteers to start work, alongside professional archaeologists who will guide and train them as they search area. Ceramic expert Dr Chris Cumberpatch will be helping to analyse the finds and will also lead the free finds handling and sorting training days. He has already paid a visit to the site and examined some early finds of pot sherds. He said: "This is a really exciting project. The sherds I have examined look like a solid early medieval assemblage, mainly local but with some regional imports.

ROUMANIE – Sulina - Romanian scuba professionals Iulian Rusu and Pascale Roibu have revealed three shipwrecks at around ten metres’ depth where the longest river of Central Europe, the Danube, flows into the Black Sea. Just a few kilometres from the port of Sulina, the easternmost point of Romania,  on the trade route between the grain growing regions of Europe that fed the Ottoman Empire, Rusu and Roibu’s several years of hunting have paid off. The largest vessel, 60 meters long, appears to be a warship. Diver Iulian Rusu said: “We found reference points that appeared in historic documents that we told ourselves were the key to finding old wrecks. Two weeks ago, we found three of them. One had these super heavy cannon balls, a hundred of them, each weighing nearly 70 kilos, and cannon wheels, so maybe the cannons are around nearby.” Diver Pascale Roibu said: “We figure that the vessels went down in the late 1700s. What helped us the most was identifying a warship that used black powder munitions. This kind was used during the Napoleonic wars. Later, in the Crimean War, they were already using a different sort.” Research in libraries and old archives suggests to Rusu and Roibu that the Sulina delta might hide more than 100 ships, such as those of the British and French navies during tumultuous times. 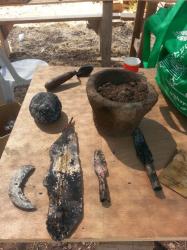 Tel Kishon - Arsonists in northern Israel torched two storerooms filled with artifacts found at a nearby salvage excavation at Tel Kishon on Monday. Some of the antiquities were over 4,000 years old. The excavations at Tel Kishon were being conducted to prevent damage to artifacts during roadwork on Route 65, near Mount Tabor in the Galilee. Among the antiquities found, and damaged in the blaze, were Bronze Age pottery and weapons from the late 4th millennium and early third millennium BCE. “It’s significant and serious damage to the study of historical objects [belonging to] everyone,” Dr. Amir Golani, the IAA archaeologist running the dig, said.